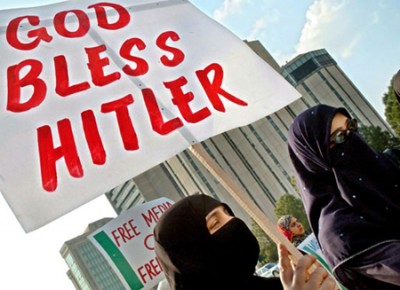 No, this sign was on a college campus, the University of California-San Diego, at a rally that was part of the Muslim Students Association’s sponsored Israel Apartheid Week.

Now, it could be this was just one hateful, fringe sign out of hundreds of more benevolent and edifying signs, but I think Bob Collins should look into this. In the meantime, I expect St. Paul mayor Chris Coleman to issue an edict banning all city employees from, I don’t know, eating at Middle Eastern delis.

I read the news today, oh boy…and remembered the 1980’s. Or was it the 2020s? For some reason, this song kept running through my head.

While we’re at it, here’s another great, haunting song from Mike and the Mechanics.

John Hinderaker at Power Line details the ratings mis-match between Fox, CNN and MSNBC (CNN and MSNBC’s ratings track very closely to each other — and well behind Fox’s). He notes that Keith Olbermann’s show especially sucks vast amounts of wind:

It’s rumored that during the Olympics, when a curling match carried over into Keith Olbermann’s time slot, ratings plunged when the curling ended and Olbermann came on. Well, that makes sense. I’d rather watch curling than Olbermann. But then, I’d rather get a root canal than watch Olbermann, too.

Well, like Olbermann, that one’s a no-brainer. The difference between a root canal and watching Keith Olbermann is that at least with a root canal they give you anesthetic.

World-class curlers (and no, I’m not talking about the Mall Diva and her profession) can come from all over the globe but the sliding stones used in the sport can only be found in one place:

Apparently, there is a very special kind of granite needed to make the hefty stones that glide down the curling sheet. Specifically, it’s blue hone granite, and it’s known to be available in just one place in the entire world: Ailsa Craig, an island off the coast of Scotland.

And supply — or at least access to the supply — apparently could be dwindling. As noted in a recent Yahoo! Sports piece, curling could face a stone crisis down the road, though just how long is unknown. Even that is complicated. From the article: It “depends on demand for curling stones, British mining regulations, puffin breeding levels and if technology somehow allows for a non-blue hone granite solution.”

I don’t think I’d want to get too emotionally invested in anything that’s regulated by the Brits — healthcare, for example — or the mating habits of puffins. Fortunately some forward-thinking folks, such as my best friend from high school, are already at work on alternatives. My friend Nick suggested on his Facebook page that they combine hockey and curling into a new sport — called “hurling”. I thought that was a great idea, but for one catch: there already is a sport called hurling, and while it involves the Irish it’s not what you think. In addition, rugby has always had plenty of hurling, though typically after the games, as King David might attest.

I hope something gets worked out so that curling can continue to inspire it’s fans. Fans such as the DFL-controlled Minnesota legislature, for example, that’s trying to slide a deadweight bonding bill past the governor.

Revealing footage (with great subtitles) of Keith Olbermann (or is it George Soros?) getting the news of Scott Brown’s historic win earlier this week.

Please note: I am NOT saying that President Obama is Hitler. I’m not so sure about Keith or George, though…

Lately I’ve been going to work in the dark, and coming home in the dark and, no, I’m not a night janitor. There is undeniable proof that the days are getting shorter. Not only that, but the projections I’ve seen suggest a dramatic, hockey-stick shaped surge in the amount of darkness in the coming weeks and months! We have got to DO SOMETHING!

Global darkening (also called “illumination change”) is a serious threat to all living creaures, with the possible exception of bats. Why, I understand that the further north you go the problem becomes even worse. Scientists predict that the North Pole will soon be covered in darkness nearly 24 hours a day! Think of the polar bears – they’ll be bumping into each other all the time unless we act now! There’s not a moment to lose when every moment loses us a little more daylight!

Don’t be fooled by those global-darkening deniers who callously say, “Don’t curse the darkness, just turn on a light.” These are evil people secretly funded by Big Electric who don’t care if our beautiful world sinks into a giant ocean of darkness were no one can see it and appreciate it. We’ll trade sunflowers, sun tea and sundresses for moths and things that go bump in the night! We should all be like Al Gore, who’s lovely estate pumps out 24-times the light of the average American home.

I blame the government for this crisis situation. Say what you will, but the days are definitely shorter since they did that so-called “Daylights Savings Time” change a couple weeks ago. Oh, sure, “Savings” – this pack of liars saves daylight about as effectively as they save jobs, and they’re redistributionists as well: I hear that there are other parts of the world where the days are actually getting longer right now. How can that be unless someone is taking our daylight and shipping it over to them? We get up early and work late to make a bright future for ourselves, only to have someone take our hard-earned light away and give it to other people!

Don’t fall into the trap of complacency, thinking, “well, it’s only a minute or two less a day.” That’s all well and good — if you want to wind up unemployed, in Greenland! Don’t try and tell me that this is “natural” and that the earth “has gone through this cycle multiple times before.” I know what I can see — or not see — with my own eyes, and the darkness is upon us. It may already be too late, but we can’t go down without fighting for what’s rightfully ours.

Fight global darkening — it’s the light thing to do!

You can see the full-sized cartoon by Mike Ramirez here.

The text tells the story, though:

Just look at Medicare and Medicaid.

Okay, it’s broke, but look at the U.S. Post office.

Okay, they’re broke, but look at my budget.

…especialy when she’s being ironic.

An expedition team which set sail from Plymouth on a 5,000-mile carbon emission-free trip to Greenland have been rescued by an oil tanker.

Raoul Surcouf, Richard Spink and skipper Ben Stoddart sent a mayday because they feared for their safety amid winds of 68mph (109km/h).

All three are reportedly exhausted but safe on board the Overseas Yellowstone.
…
The team, which left Mount Batten Marina in Plymouth on 19 April in a boat named the Fleur, aimed to rely on sail, solar and man power on a 580-mile (933km/h) journey to and from the highest point of the Greenland ice cap.

Perhaps Alanis Morissette will hear about these guys and be inspired to write a song that really is ironic.

Suppressed photo of Air Force One taking a shortcut en route to an Earth Day speech:

Either that, or the President’s jet could be taking the long way around to Mexico to deliver Tamiflu and 100 Acorn Community Organizers to over-throw the drug cartels.