Our Christmas plans took us to the Gulf of Trieste and the eastern shores of the Adriatic. The warm but foggy weather persisted, making it comfortable for walking around but limiting the views and rendering the scenery a little dull, though you could tell how spectacular it would be in season. It was during our time in Trieste that we drove down to Pula in Croatia. Closer to “home”, however, were the beautiful gardens and castle of Miramare. 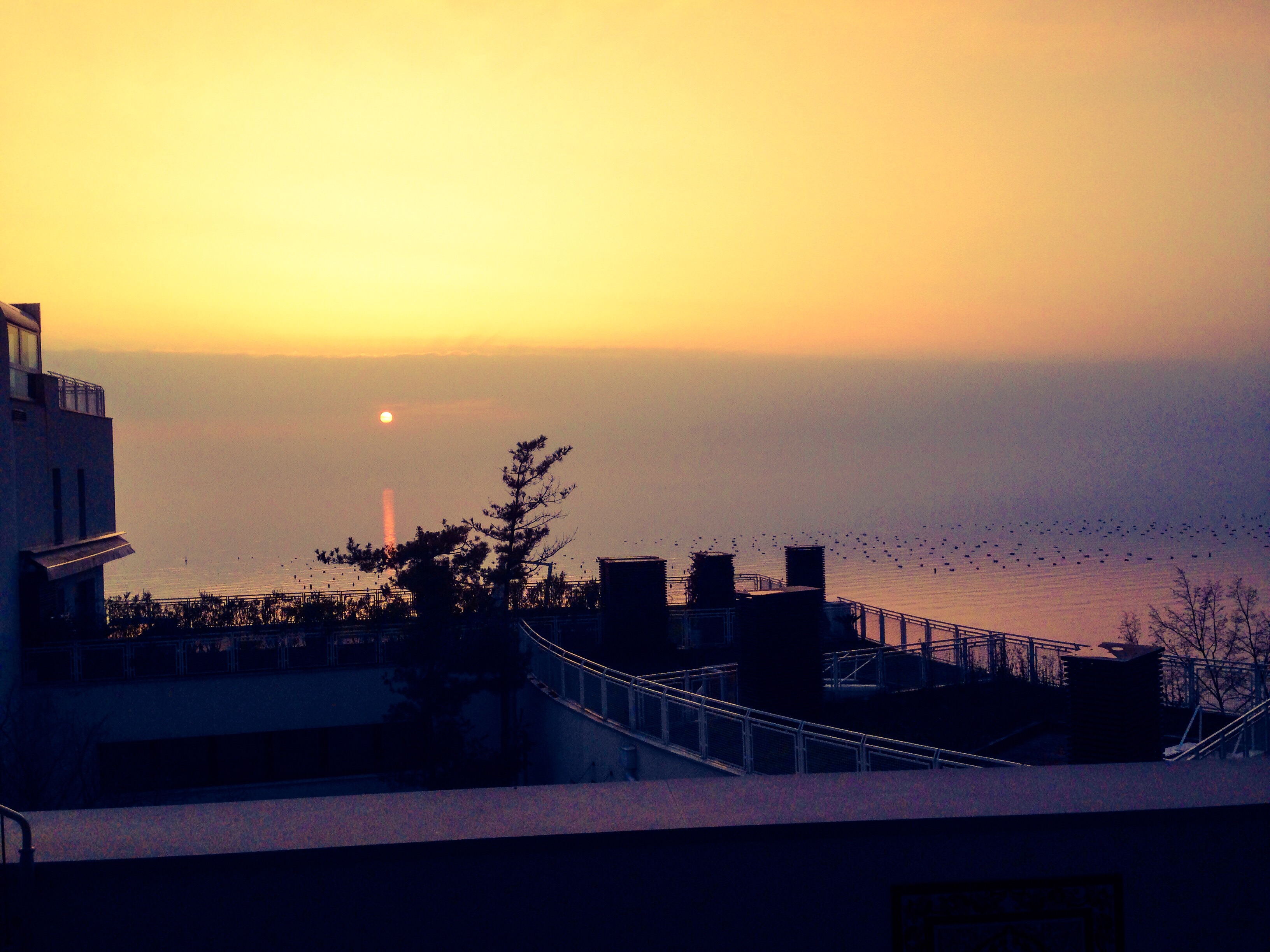 Following yonder star…
We were blessed with a hazy sunset on Christmas Day in our apartment overlooking the Adriatic near Trieste. 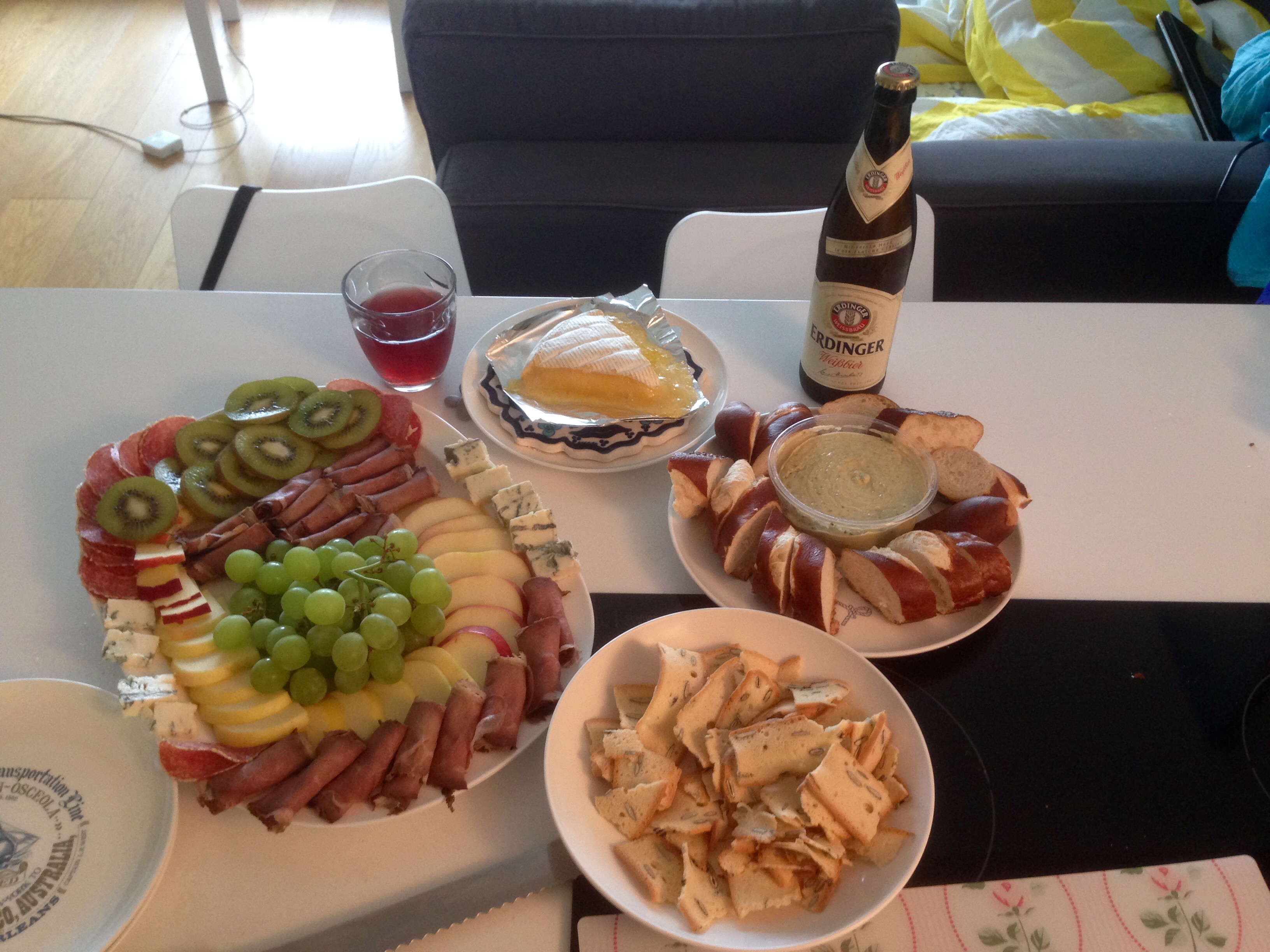 We drove to Trieste on Dec. 24 and knew we weren’t likely to find grocery stores or restaurants open on Christmas day so we picked up some food for our Christmas dinner, and the Reverend Mother and Tiger Lilly rolled, sliced and presented our feast: roast beef, salami, brie and Gorgonzola cheese, hummus, pretzel bread, almond toast, apples and kiwi. Just right. 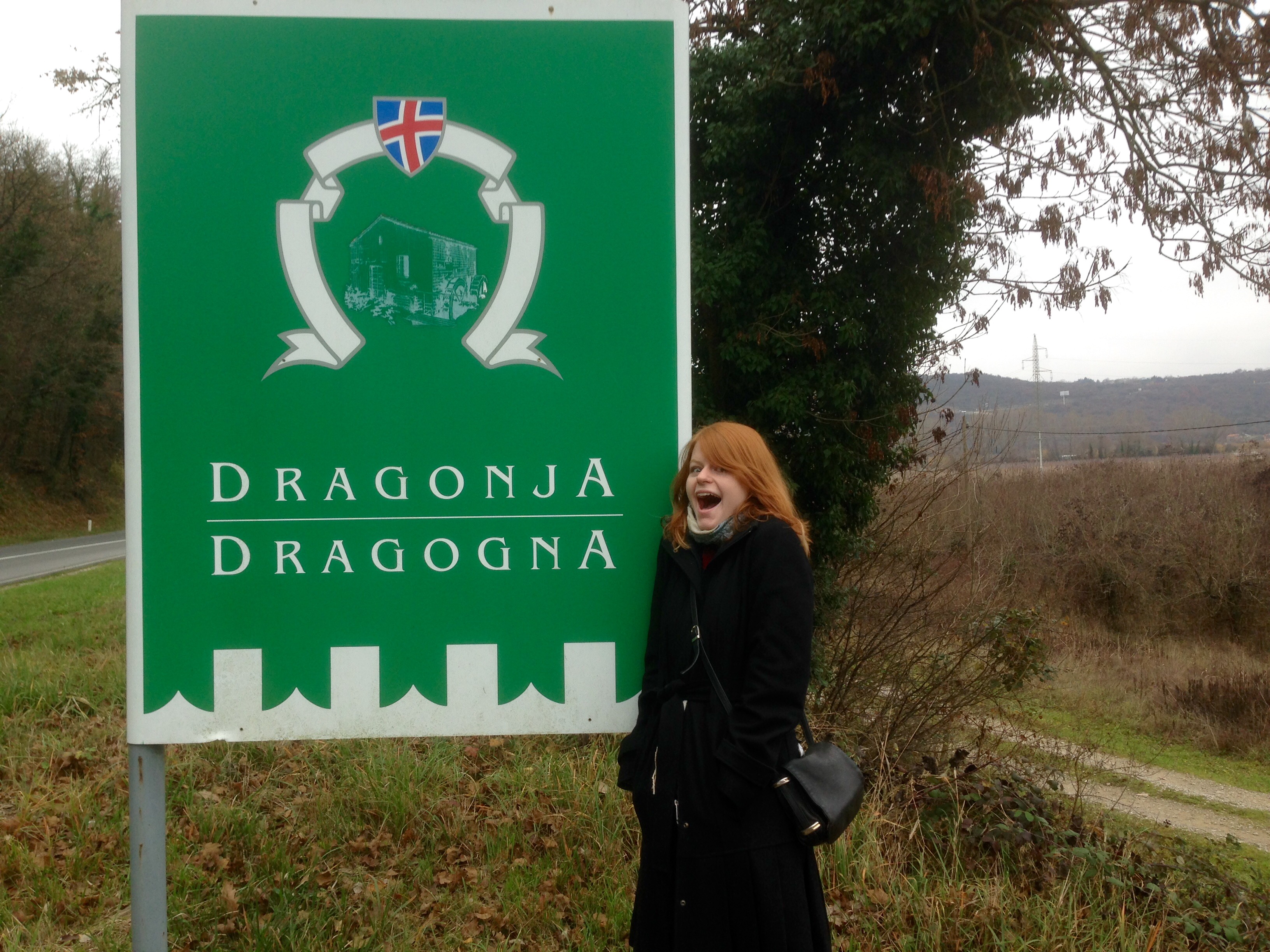 This village is close to the border of Slovenia and Croatia. We drove through it; most of the streets would barely qualify as driveways but it was interesting to get a glimpse of life here. Old, old stone houses and buildings looming over narrow cobblestone alleys, looking like the 16th century – except for satellite dishes stuck on the sides of some of the buildings. We didn’t see any signs of dragons, or hear any Thu’um, which was kind of disappointing but probably safer.

Dragon signs might be elusive, but it’s easier to find signs of House of Habsburg in the Czech Republic, Austria, Germany, Spain and even Italy. Emperors, Dukes, Archdukes and countless princes and barons fill the family histories, which no doubt made for interesting Christmas letters: “Greetings, all – it’s been a busy year. Otto annexed Bohemia and little Max had his hands full with the Basques, but we’re all looking forward to the next family reunion so we can arrange a couple more weddings – goodness, the kids grow up so fast!”

One Habsburg, the Archduke Ferdinand Maximillian (younger brother of Franz Joseph, Emperor of Austria) came to Trieste, Italy after circumnavigating the globe and being appointed head of the Imperial Navy, and built a beautiful castle overlooking the Adriatic, Castello Miramare. Principally built between 1856 and 1860, the castle still wasn’t completely finished before duty called and Ferdinand accepted Napoloen III’s request to become Emperor of Mexico where he was ultimately captured and executed in the Mexican Revolution by Benito Juarez’s Republican forces, even though Maximillian was a progressive reformer who had instituted many populist policies. (I don’t mean to sound disrespectful to a fascinating man with an interesting life, but there’s so much intertwined history with threads leading in different directions that a slap-dash fly-by is the best I can do for the purposes of keeping this travelogue manageable.) The story of Maximillian and his wife, Charlotte of Belgium, is both romantic and tragic; it appears that constructing Miramare was truly a labor of love, with many features to delight his wife. Maximillian was only in his mid-30s when he died, and his wife – busy on the continent trying to raise funds and troops for his support at the time – suffered a nervous breakdown and lived the rest of her life in seclusion. 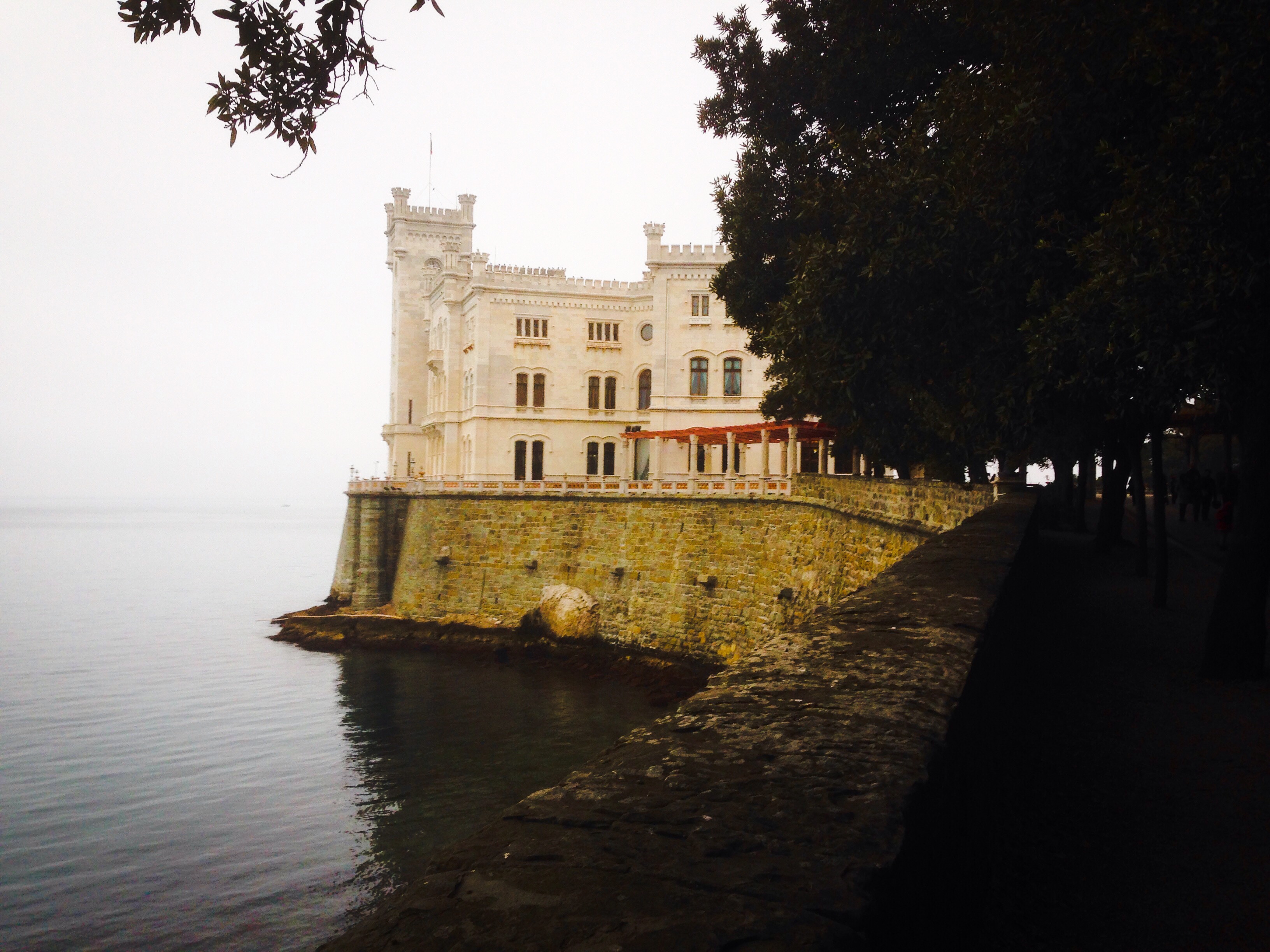 Maximillian loved the sea, so it was fitting that he built his castle on the coast, and ordered exotic plants to be cultivated on the rocky grounds creating a distinctive park and garden. 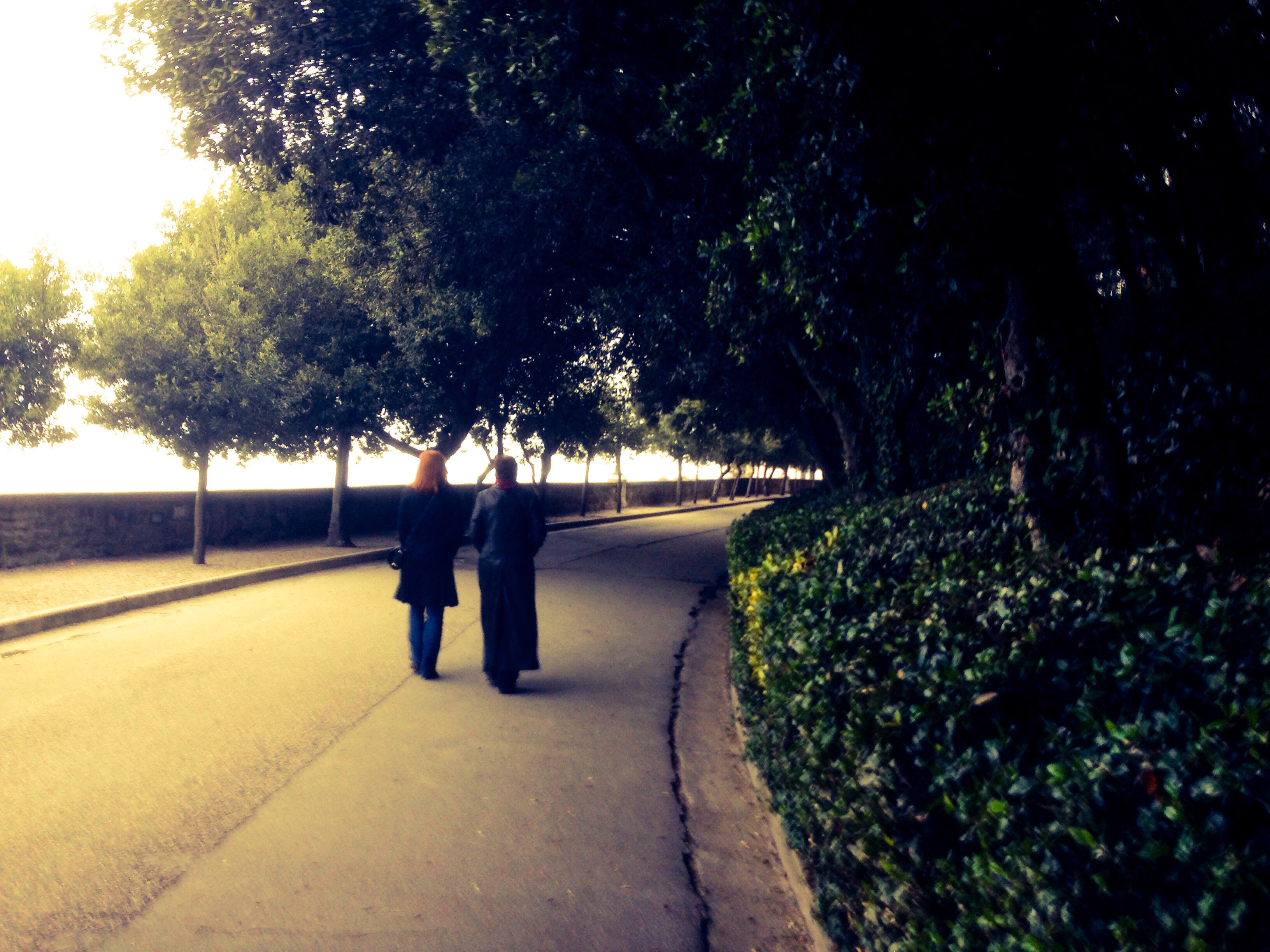 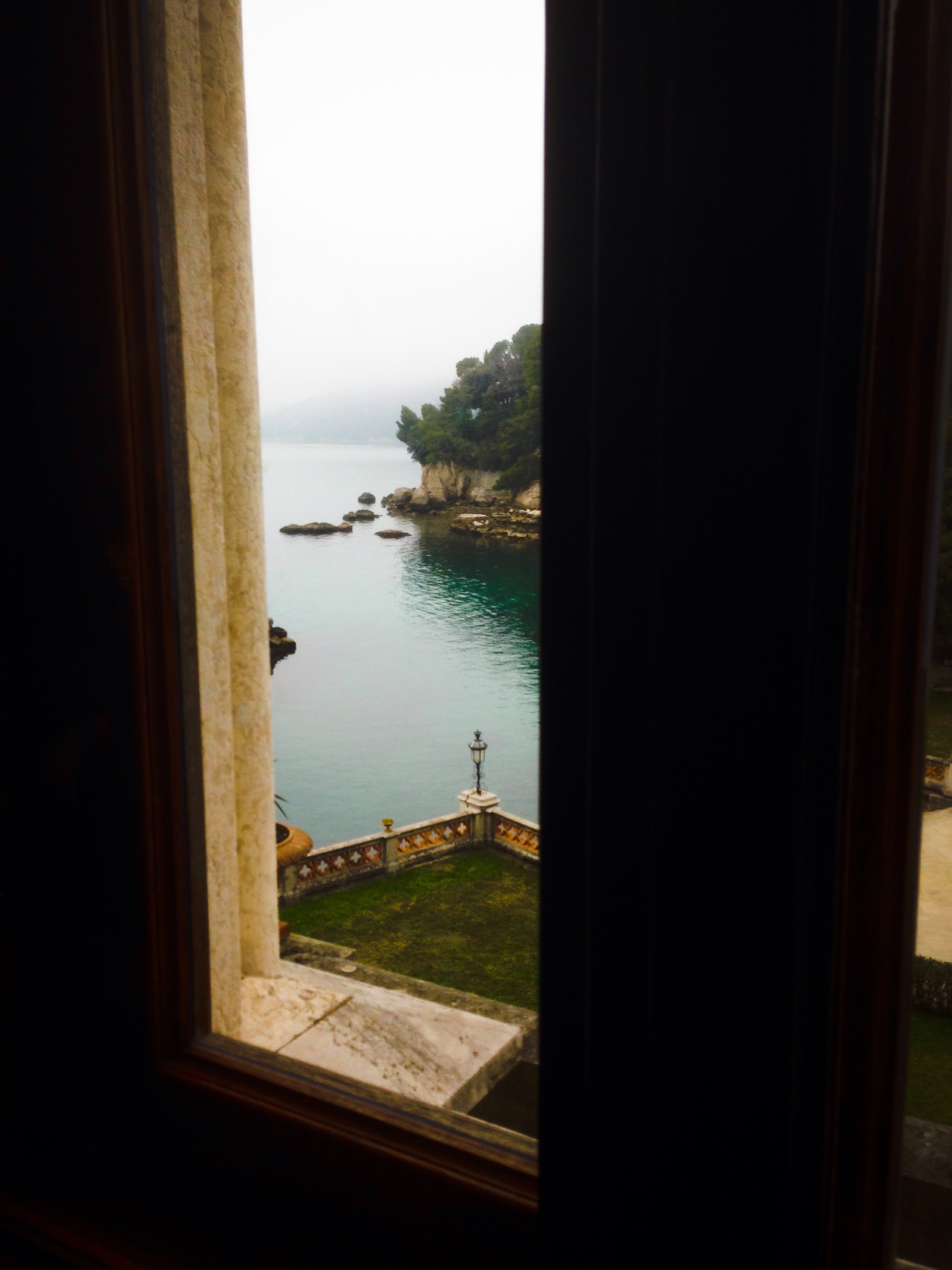 Miramare has its own boat landing, viewed here from one of the castle windows. 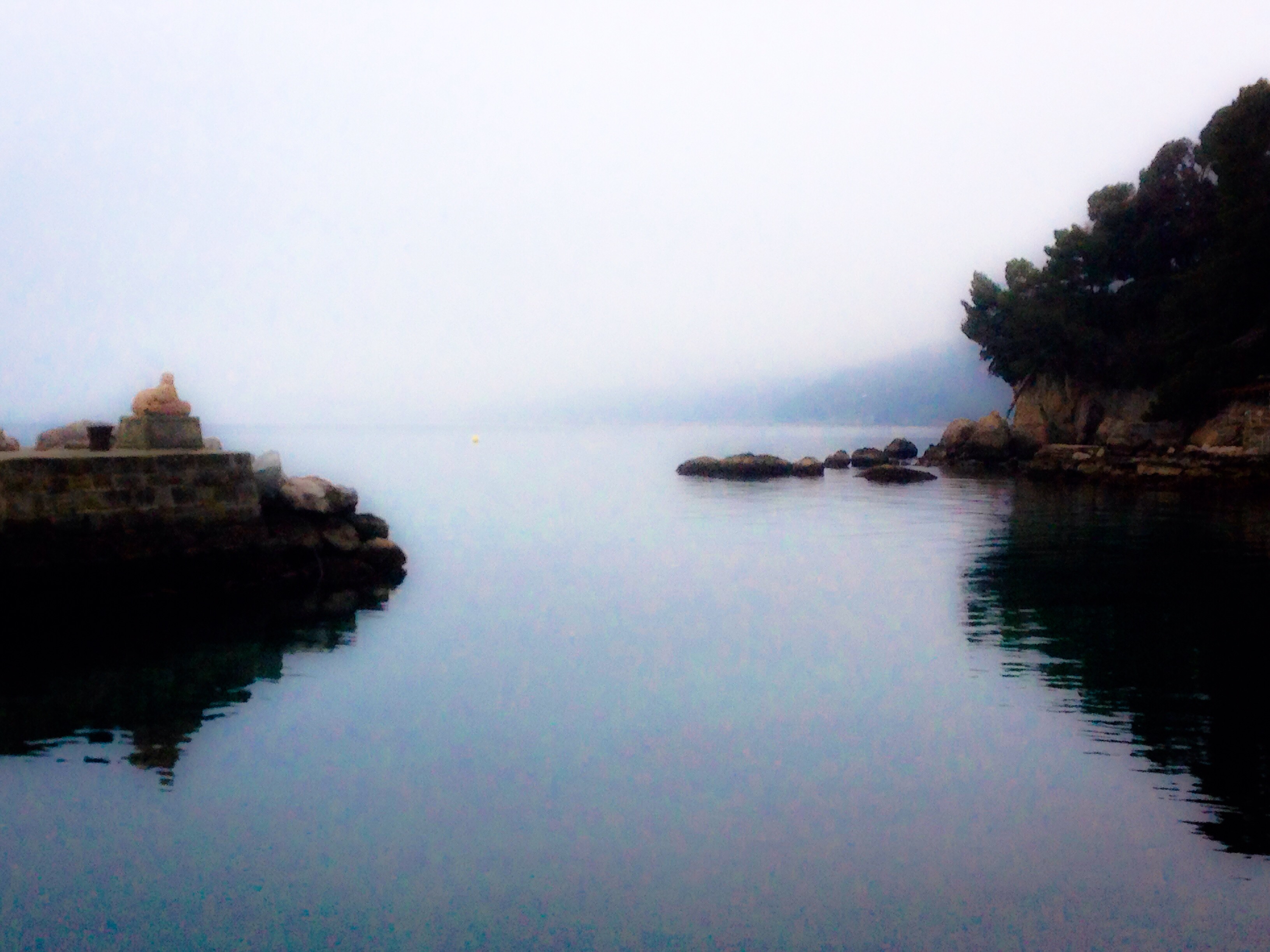 On the misty day that we were there, the landing made me think of Tolkein’s “Gray Havens”. 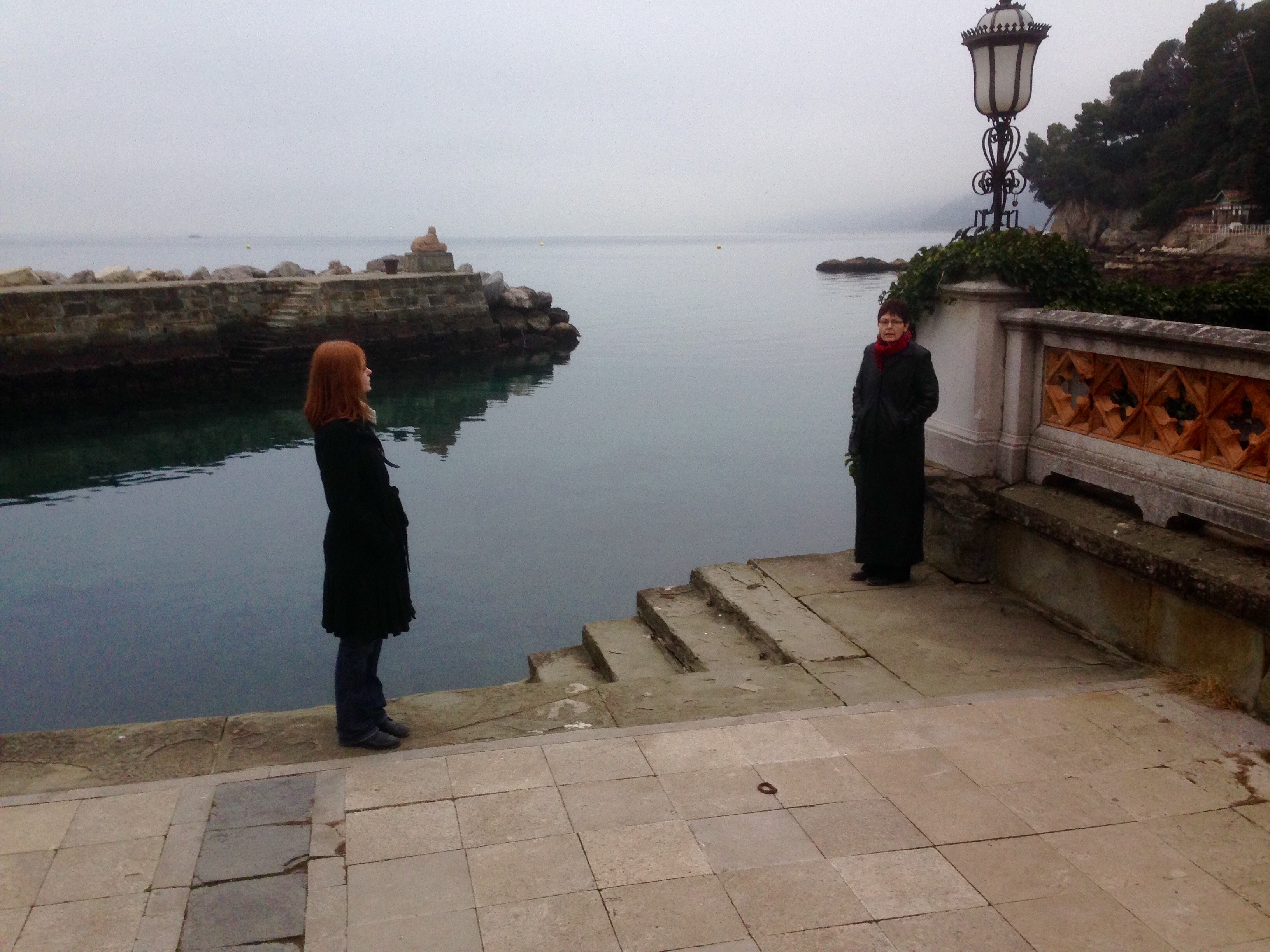 I seem to collect interesting shots of my wife and daughter near water. 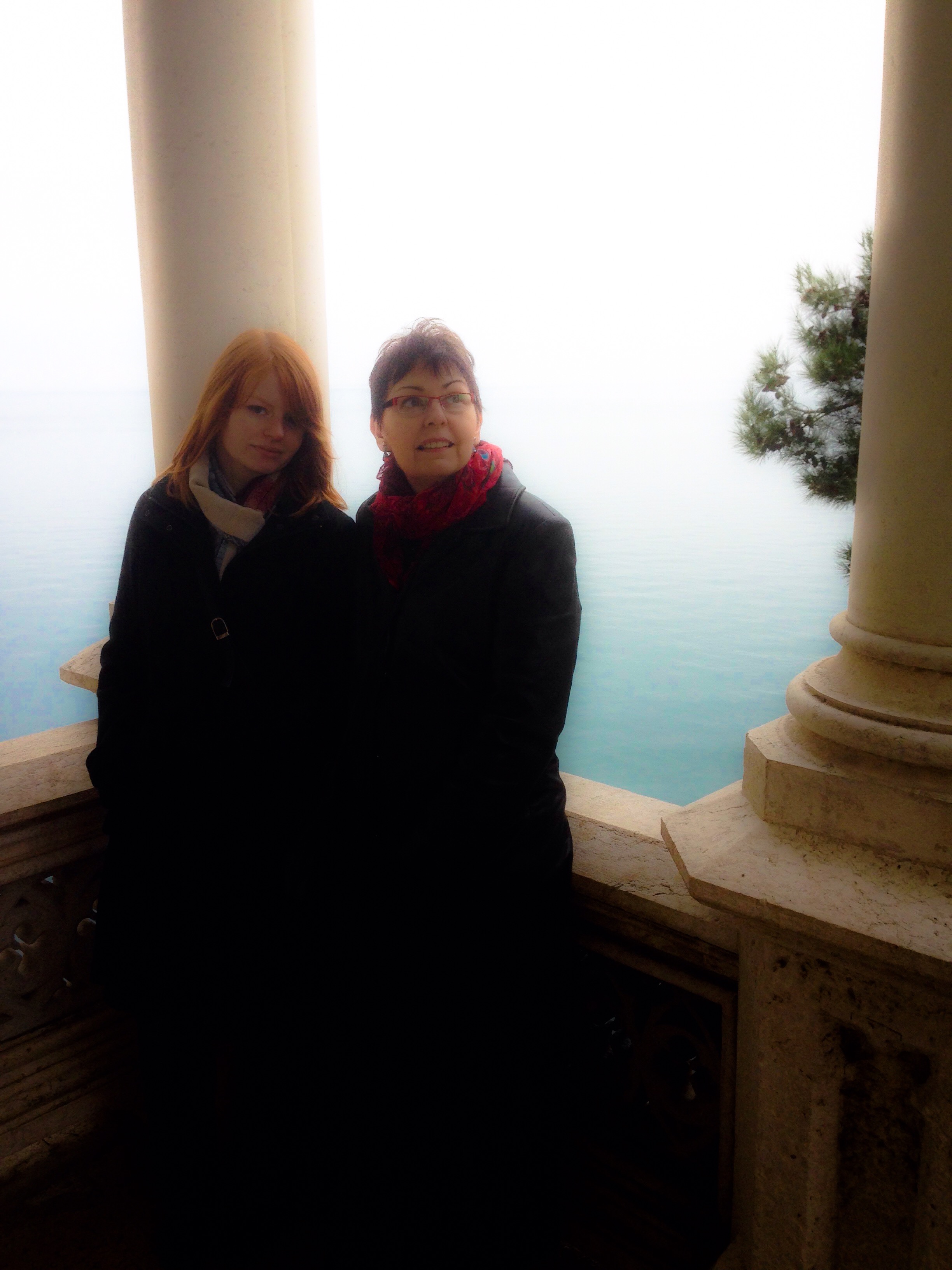 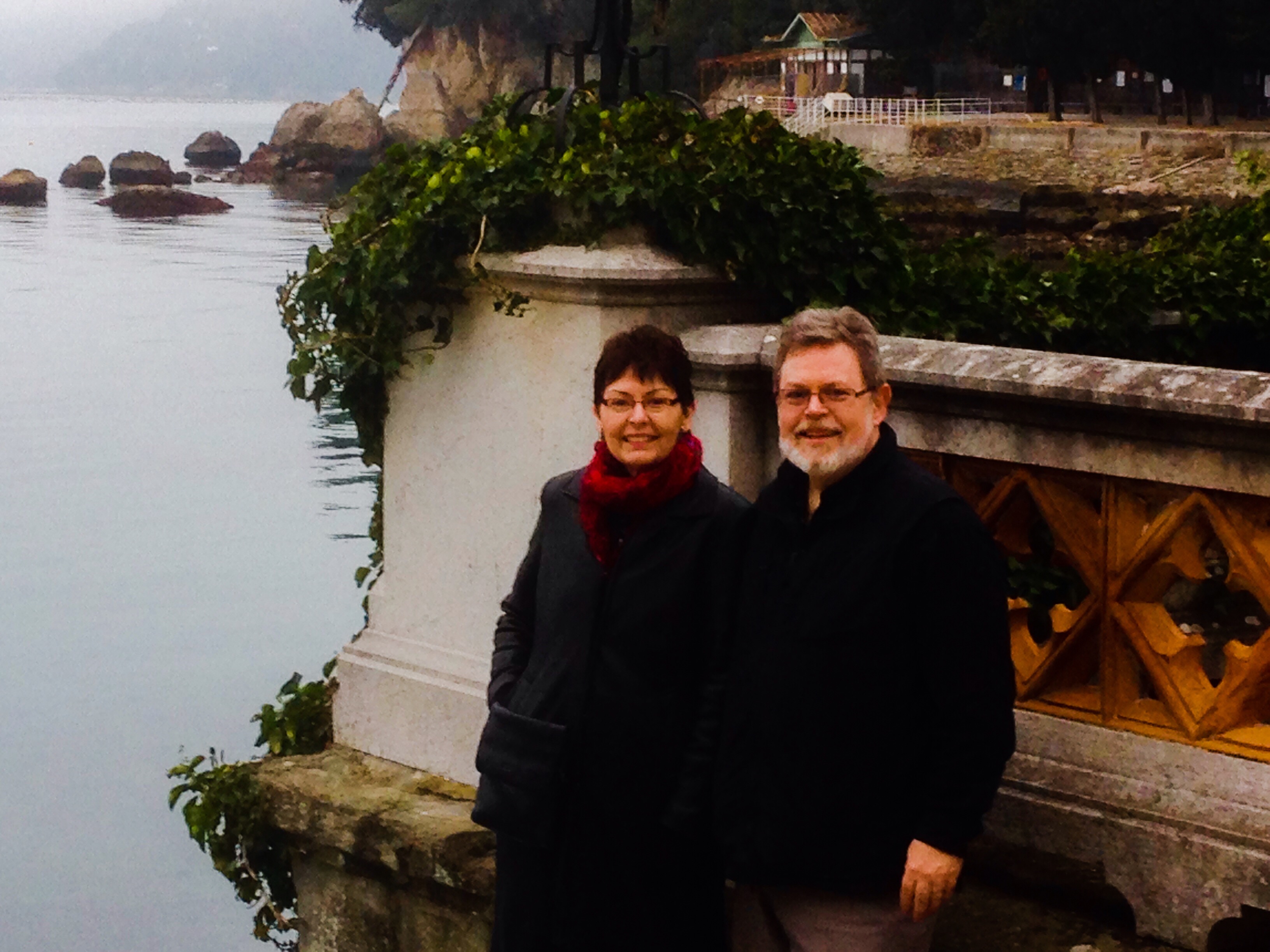 I manage to get into a couple of photos from time to time.