We didn’t get to see Turin (Torino) at its best as the week we were there it was pretty overcast and drizzly. Still, you can see the “old bones”, so to speak, of the history and culture here. The one-time capital of Italy under the Savoys, Turin is chock-full of churches, towers, museums and galleries, both above and below ground (see the earlier post about the Pietro Micca museum). One of the neatest things, though, is just to get out in the city on a Sunday afternoon where it seems everyone is on the Via Roma, Via Garabaldi and Via Po like middle-aged teens at the (outdoor) Mall.

Turin is also where we stayed in the 3 bedroom penthouse apartment – the nicest of all the places we stayed (and we’ve stayed in some nice ones). The apartment was through the Home-Swap organization we joined prior to the trip, and not an Airbnb location. The woman who owns the apartment is a book translator and in addition to an elevator that came right to the apartment’s foyer, a Nespresso machine, two bathrooms with showers, the place was full of shelves and stacks of books. We never met the owner, but we felt as if we knew her! The master bath also had a balcony that was high enough for us to see multiple fireworks displays across the city on New Years’s Eve.

This is the Piazza Vittorio at the end of the Via Po, framing the Chiesa Gran Madre di Dio just across the River Po. The Via Po is is one of the four main streets in Turin (Torino) and leads from the Piazza Castello (the central square of Turin) down to the river. The Via Po features covered colonnades on both sides of the street all the way to the Vittorio; shops, restaurants and bookstores line both colonnades.

The Garden and Fountain of the Angels at the Piazza Solferino in Turin. It wasn’t a particularly good day to stroll in a garden or past fountains. 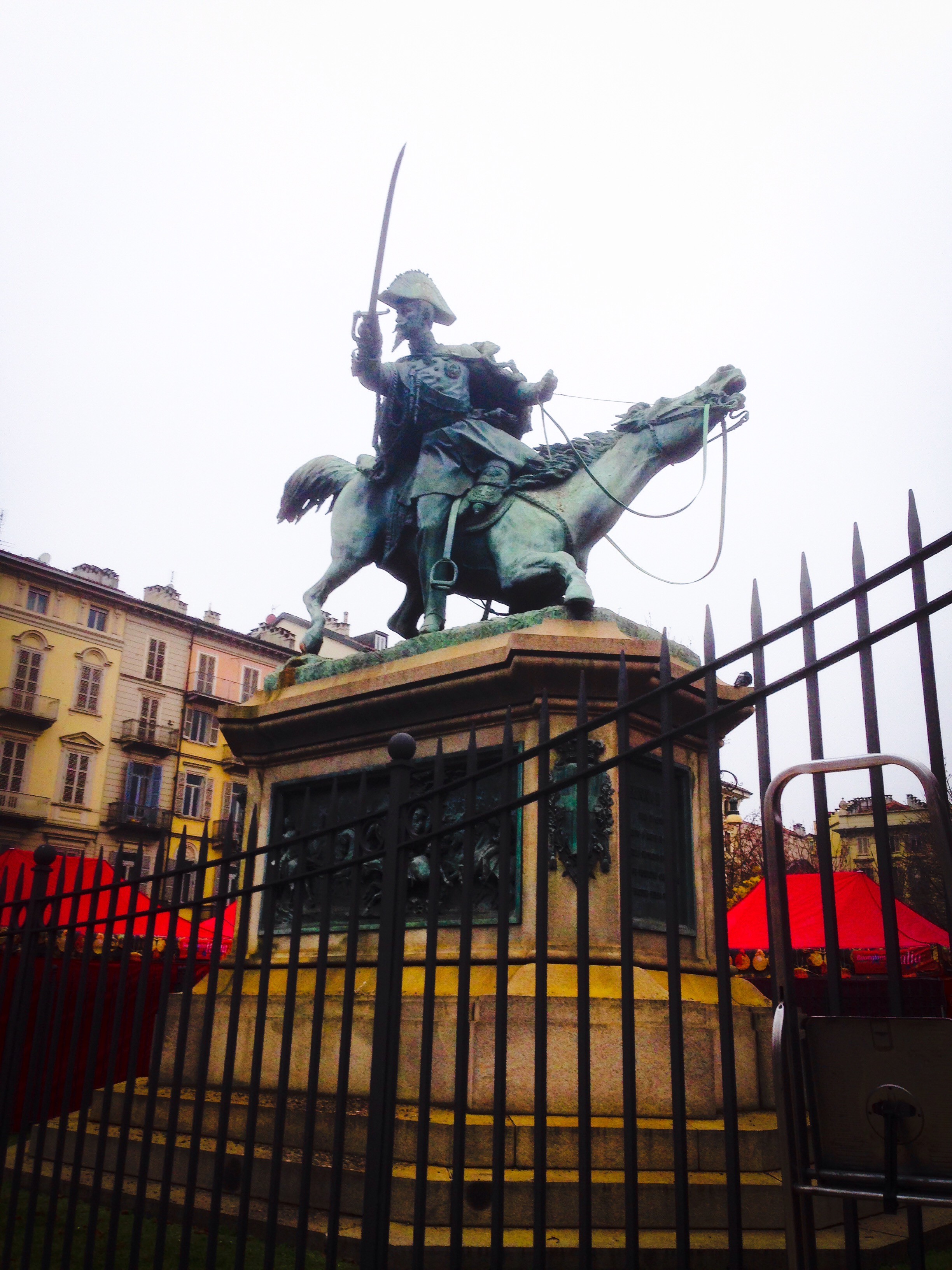 Duke Ferdinand of Savoy, in the Piazza Solferino. It’s not the greatest photo or most compelling image, but I liked the way the colors played off of each other. 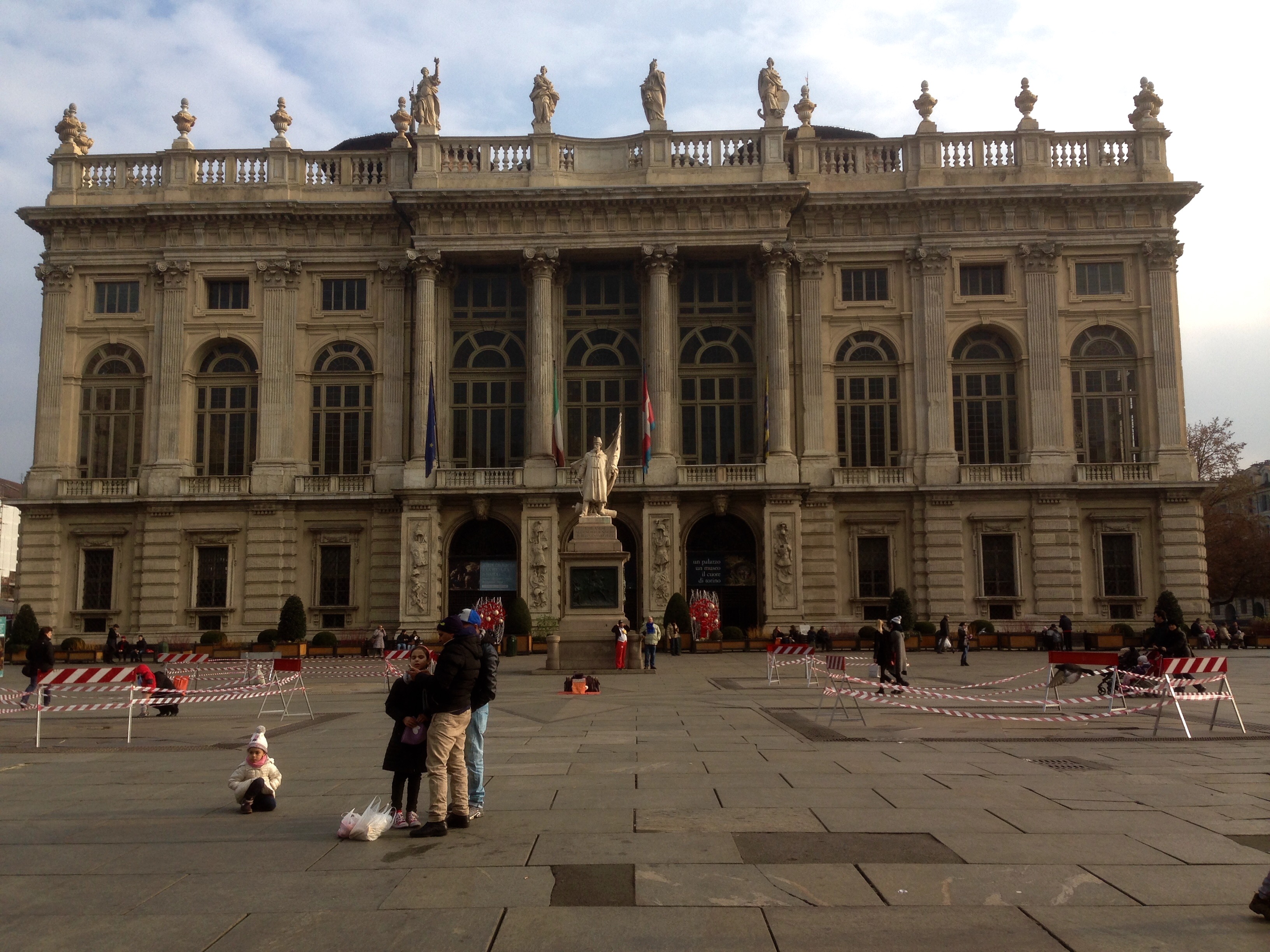 Palazzo d’ Madama in Piazza Castello, Turin. The former home of queens, it later served as the Italian Senate building. We were here on January 30, and they were getting ready to set up the fireworks and other attractions for New Year’s Eve.

Via Garabaldi is another of the wide thoroughfares leading to the Piazza Castello. It is also lined with shops and seems to be pretty busy all the time. 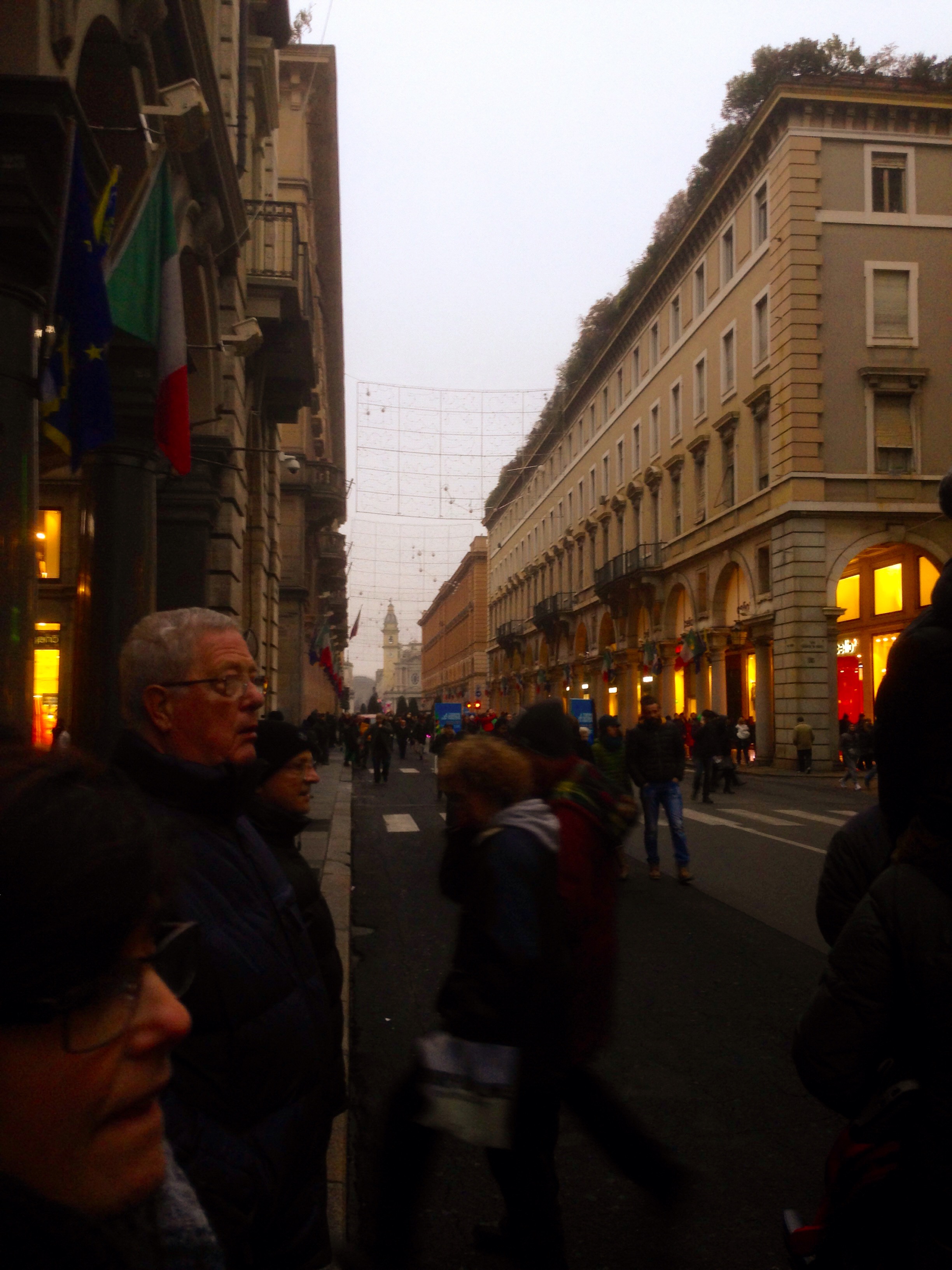 Sunday afternoon seems to be the time when everyone hits the main “Vias” – Via Po, Via Garabaldi, Via Roma. Shopping, coffee shops, bars, street vendors…it’s quite a scene. Here the crowd is watching a team of break-dancers. This is the Via Roma with Piazza San Carlo in the distance. 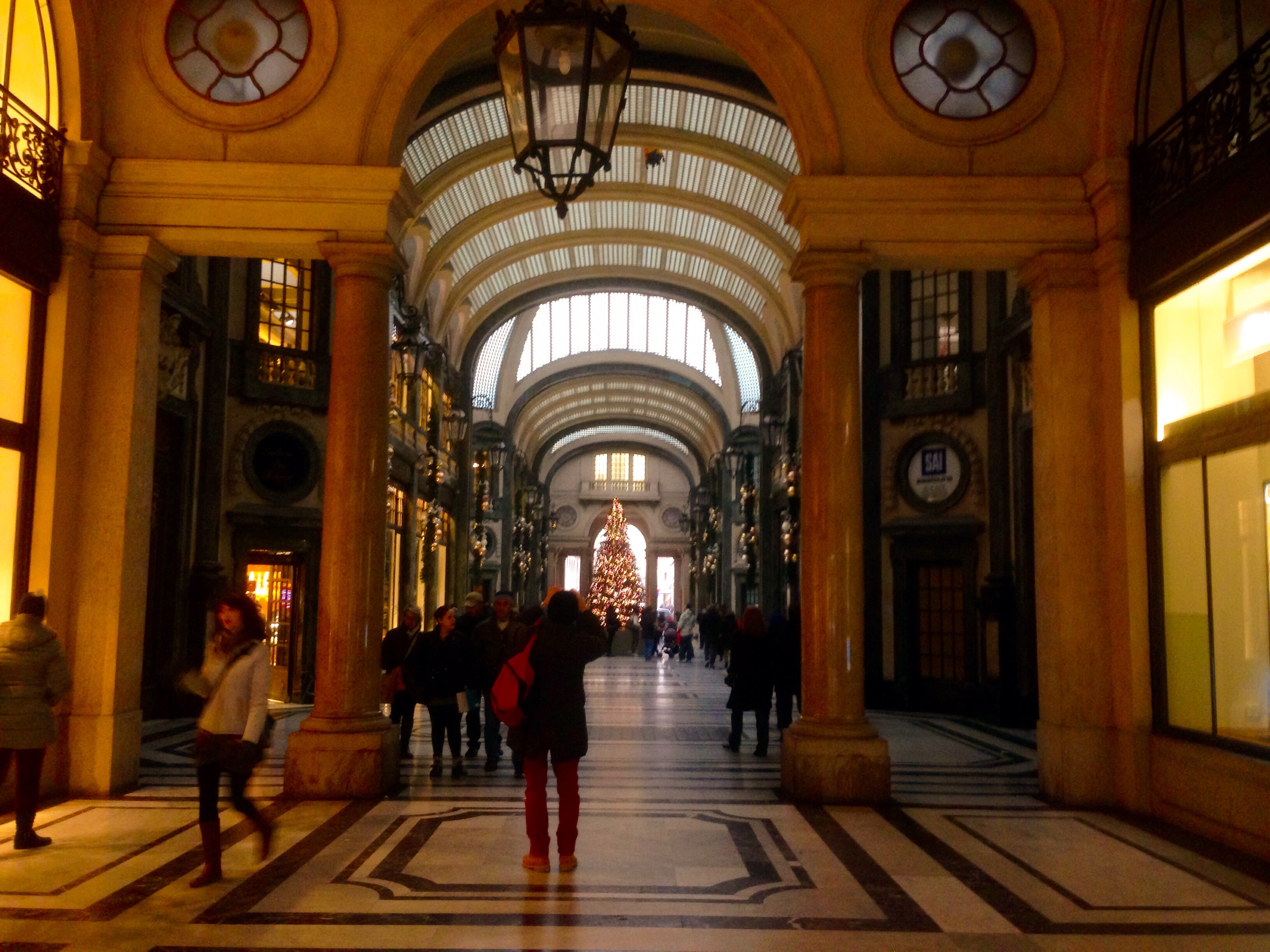 The Piazza San Carlo is Turin’s “high end” district, and the colonnades and gallerias around it feature some pretty upscale shops and restaurants. 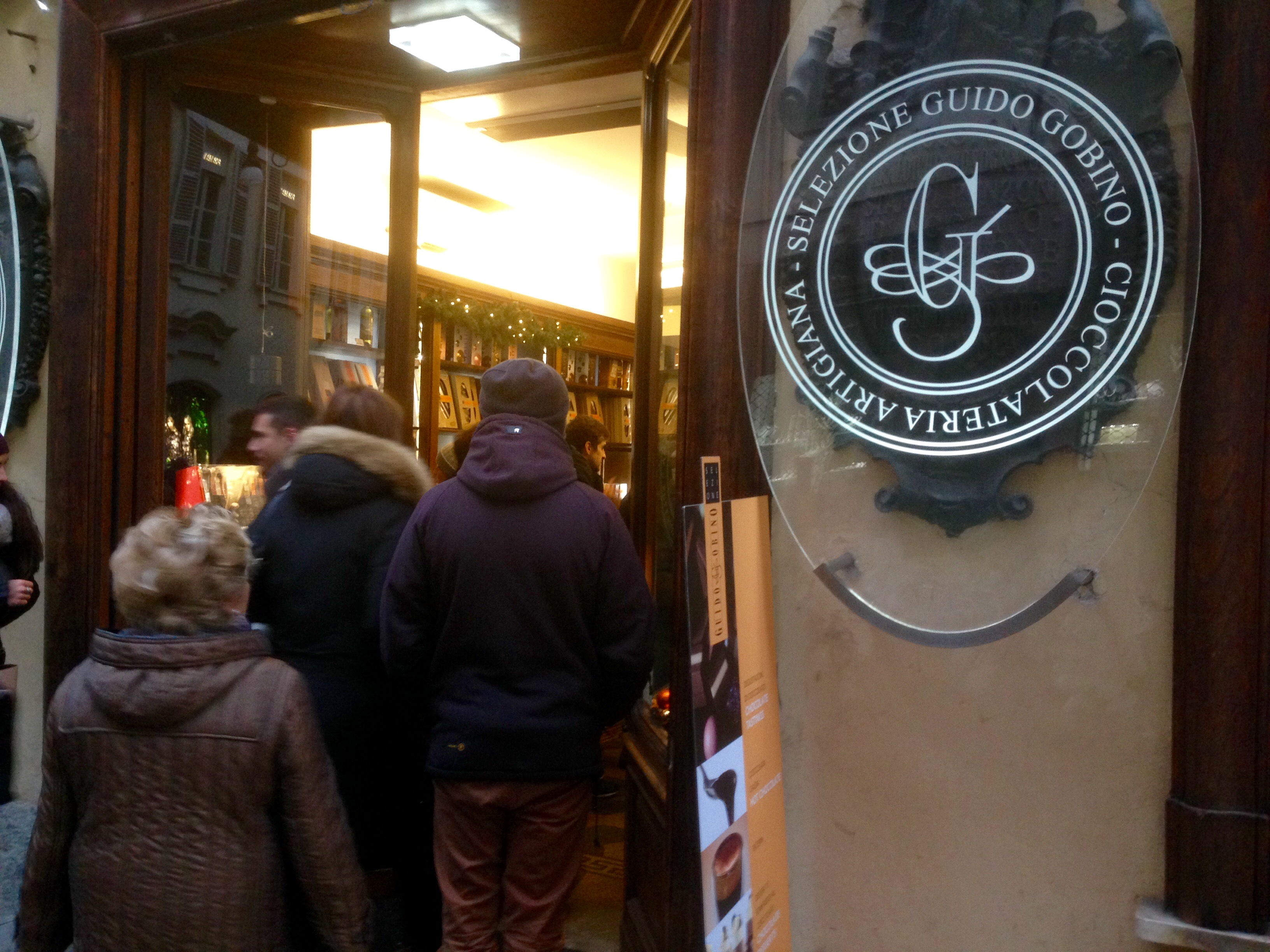 On a cold, drizzly day people were lined up outside Guido Gobino for their famous hot chocolate, that is basically liquid pudding (with that nice milk skin on the top). I understand people are lined up outside this shop even when it’s nice weather. 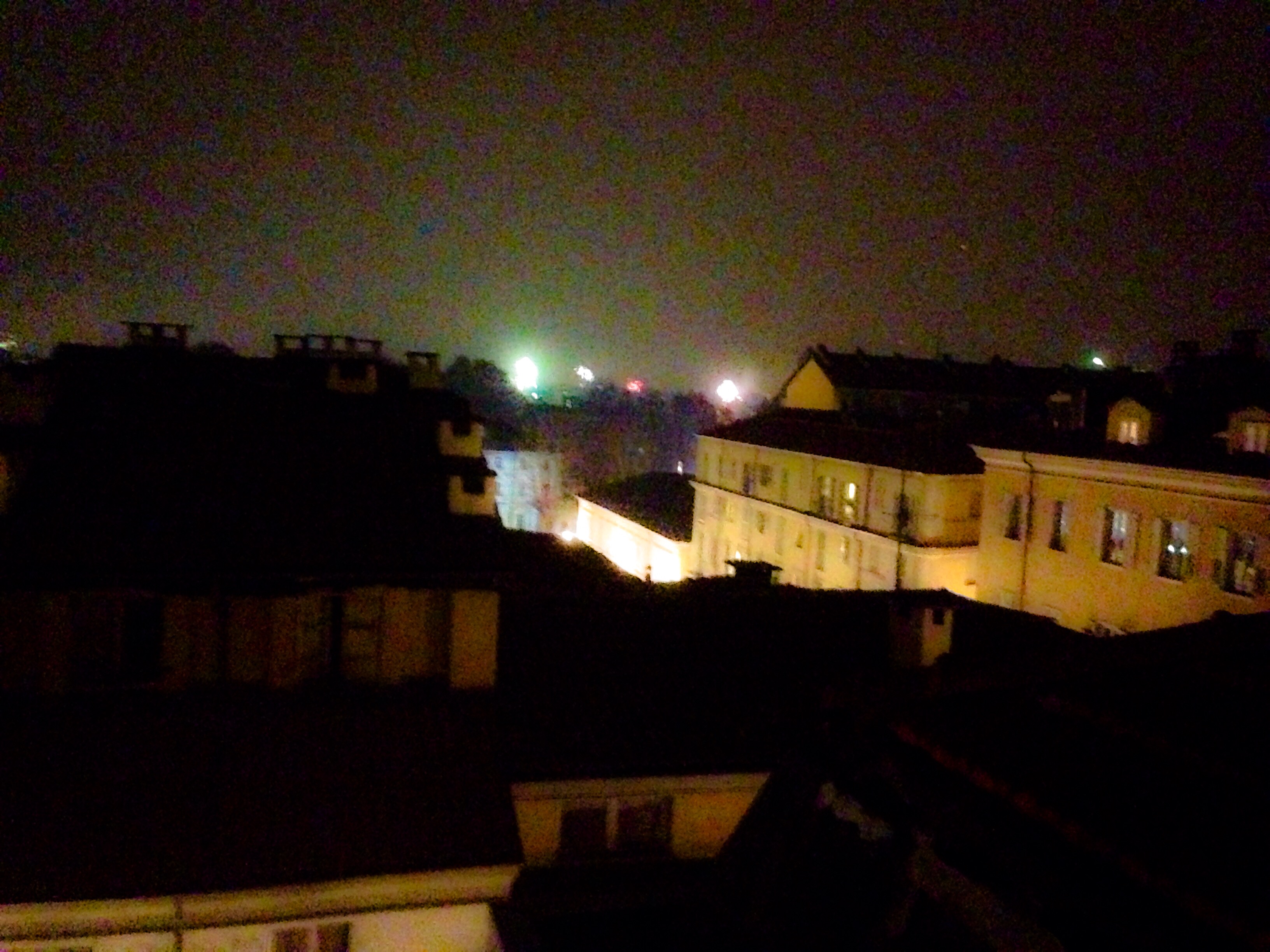 On New Year’s Eve we stood on the balcony of our apartment and could see the midnight fireworks displays taking place simultaneously at Piazza della Repubblica, Piazza Castello, and Piazza San Carlos. The sound was incredible as it bounced off the old buildings and through the alleys!