When you’re in a place such as Turin the number of things to see can be overwhelming. I came across this rather quirky sounding attraction, though, and I’m really glad we decided to check it out. It’s the Museum of Pietro Micca, the hero of the 1706 siege of Turin by France.

This isn’t your typical war-story, though. In this case, the most significant fighting took place underground, in the tunnels the French sappers dug to try to go under the Turin citadel, and in the tunnels dug by the Piedmont miners and brick-layers to thwart them. The defenders were also adept at digging out to where the French artillery pieces were set up to bombard the walls. They would dig out to the guns, finding their directions by using pebbles on drum-heads that bounced as the cannons and mortars fired: if the pebbles bounced right, the gun was to your left; if they bounced left, the gun was to your right; if they bounced straight up you tunneled a little closer set a couple of kegs in the ground under the emplacement, partially collapsed the tunnel to direct the blast in the proper direction, lit the fuse – and ran! The ensuing explosion would blow the artillery-men, the cannon, and their own powder sky-high. Besides the damage, it was also a form of psychological warfare because the gunners had no warning that they were about to become human cannonballs themselves. If you didn’t fire your cannon then the defenders couldn’t find you – but then what good is a cannon?

Anyway, lots of tunnels and counter-tunnels were dug by miners and brick-layers. One night, the French infiltrated the main tunnel network and were about to break through into the tunnels that would take them right inside the citadel. Pietro Micca barricaded the tunnel door, and as the French started to break it down, set a short fuse under 30 kegs of powder – killing the French, collapsing the tunnel and, unfortunately, resulting in his own demise. Before the French could recoup, the Piedmont’s Austrian and Prussian allies attacked the French rear and drove them off, a key battle in Italy’s ultimate independence.

What’s neat about the museum is that this isn’t a walk-through of exhibit halls looking at cannons and old uniforms. Instead, you go down into the tunnels themselves (there are approximately 9 kilometers of tunnels in the network, but the tour just takes through a few hundred meters worth). You see the structures, the excavated chamber that Micca blew up, and receive an interesting education from the all-volunteer guides who are dedicated to preserving this site, their history, and the memory of Pietro Micca. 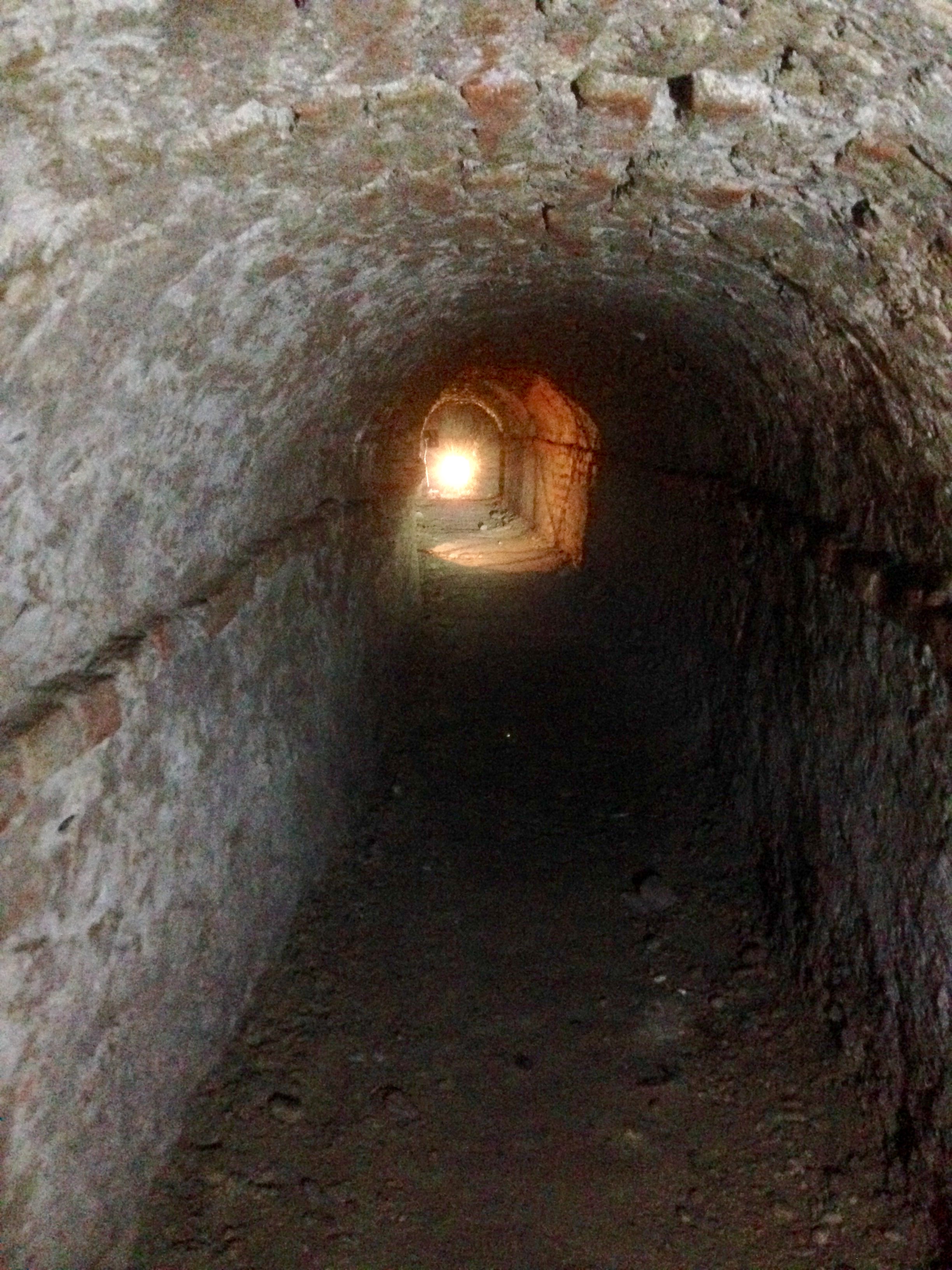 The ground is very solid in this region, and the tunnels – more than 300 years old, are well preserved. The bricks extending into the tunnels along the sides served two purposes. One was as a support as the tunnel arches were put in; the second was to use as a guide (since there was little illumination) as you made your way around the network. 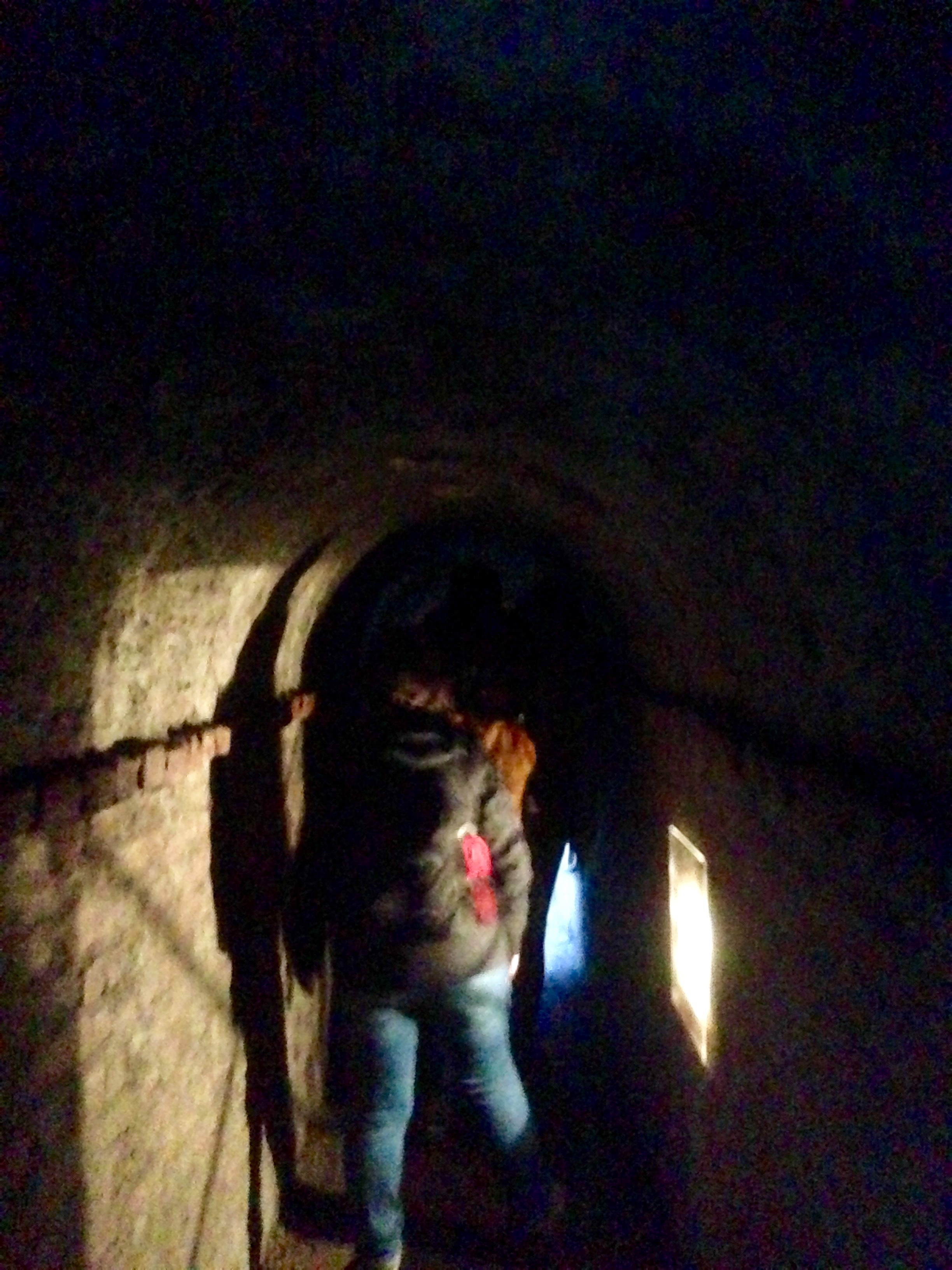 The tunnels aren’t as claustrophobic as you might think. My hair only brushed the top of the tunnels on one occasion; so most folks can walk easily along (the floors are also in good shape). The wall lights aren’t original, of course, but most illumination is done with the guide’s big flashlight and the flashlight issued to the volunteer who agrees to bring up the back of the line (which was Tiger Lilly in our group). 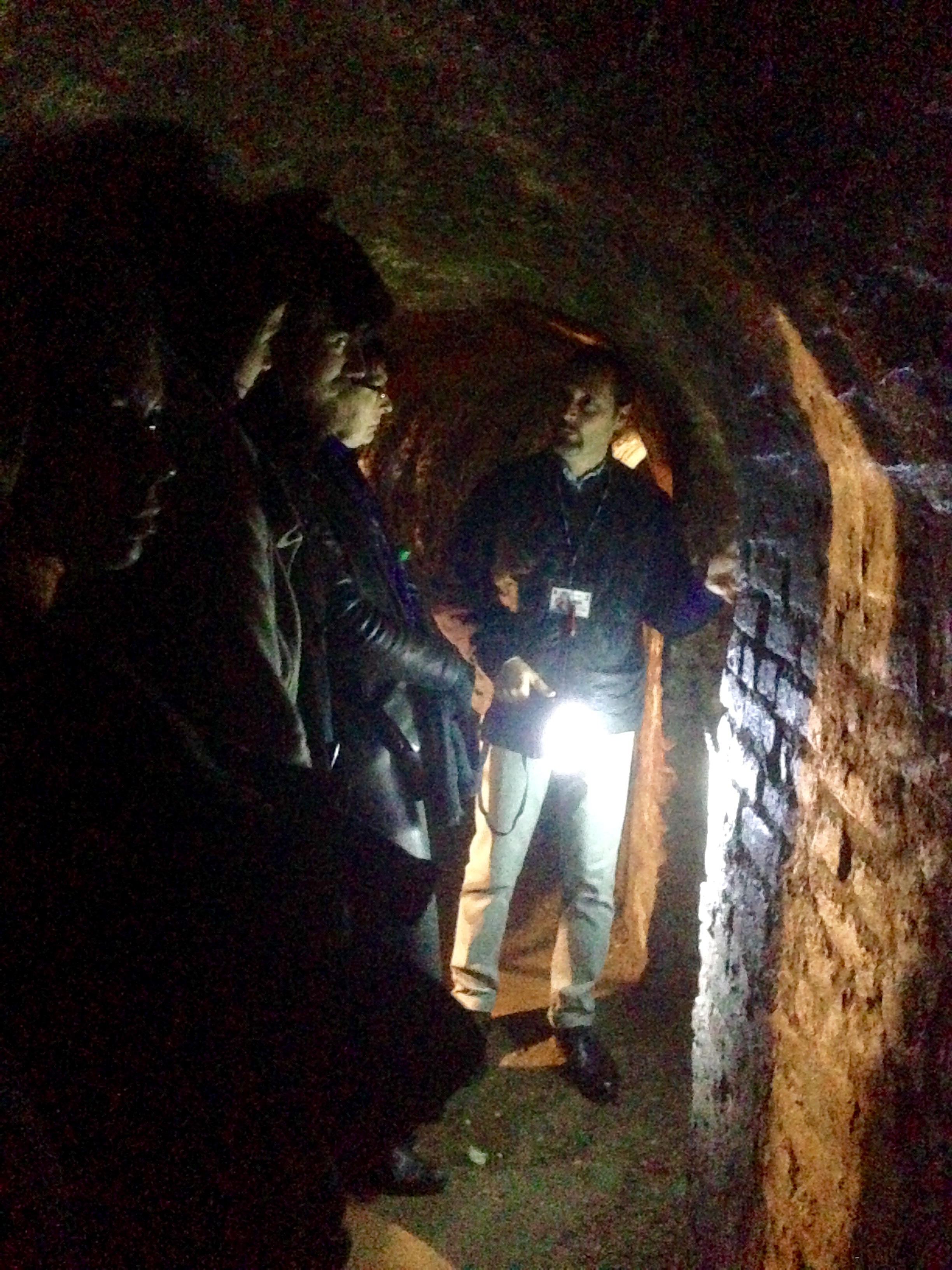 The tours can take about a dozen people at a time. The day we were there was exceptionally busy because most of the other museums in town were closed. There were multiple tours going on simultaneously in different parts of the tunnels and exhibits.