One evening last summer I was heading back to the Cities from Red Wing when I decided to take the Hwy. 61 route to Hwy. 50 and bypass downtown Hastings. In doing so I passed through the little town of Miesville and there, in the gloaming, was a little jewel of a ball park right next to the highway in “downtown”. The park lights were on and the players on the field in their white uniforms seemed to glow in contrast to the green, groomed grass. I would have stopped but I needed to get back to the Cities so I promised myself that I’d get back down there for a game.

Last Wednesday night was the night I fulfilled that promise, bringing along baseball and burger fan Marty Andrade to celebrate the completion of his MBA. The rest of the family, including Ben and the fully-baked cupcake decided to come along since we were going to eat at King’s Place before the game. King’s Place is something else I discovered in my trips, a historic building now serving as a family-run bar and restaurant. It’s popular with the snowmobilers in the winter and baseball fans in the summer, and hamburger fans year-round because the menu offers more than 50 variations of burgers (including a new one that features peanut-butter, bacon, mayo and lettuce – it’s fabulous, really!). 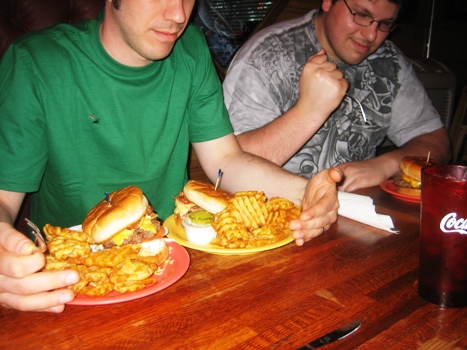 Pregame warm-ups with a few of the 50+ burgers offered at King’s Place.

King’s Place is across the “highway” from Jack Ruhr Field — the highway being two lanes of asphalt with a 30 mph speed limit bisecting maybe 20 buildings. You could walk to the ballpark easily enough from King’s Place, but there’s plenty of parking behind the stadium itself (with a view of the cemetery that adjoins the local Catholic church). Be sure to park your car out of foul ball range, though. As you walk in through the gate and buy your tickets ($3 to sit anywhere, including underneath the covered grandstand behind home plate) you can tell immediately that this ballpark is well loved. The field is immaculate, well-mown and meticulously edged. The greensward is a uniform emerald color that practically begs you to take off your shoes and socks and wiggle your bare toes in it. The outfield fence is thoroughly covered with signs from local sponsors, ranging from casinos to waste management companies. One such sign took the Reverend Mother by surprise; it was for a printing company and featured a logo that she herself had designed some 30 years ago. Beyond the right field and center field fences rows of corn stretched to the horizon

As we watched the visiting team — from Stewartville, believe it or not — take infield practice we listened to the broadcast of the Twins-Brewers game over the PA system and found plenty of bleacher seating behind home plate and a row of stadium-style seats running from third base and around the backstop. There were maybe about 50 people there, mingling and chatting. 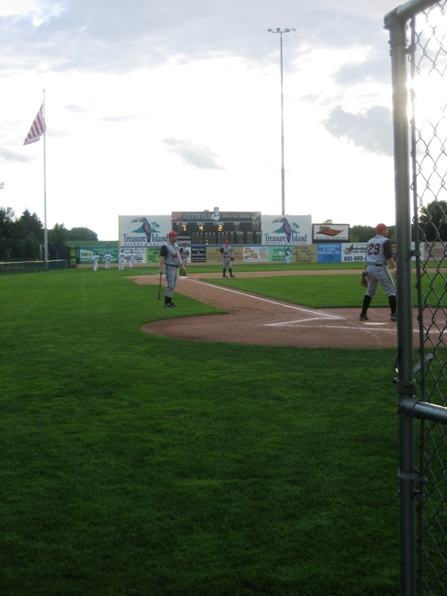 The players, too, seem pretty casual. They are young men in their early 20’s with a smattering of barrel-chested coaches, running through their routines with easy banter. Most are not likely to be “prospects” but they wouldn’t be here if they were without some skills. The hometown pitcher, for example, has a compact and consistent delivery with a noticeable curve and a satisfying pop when the fast ball hits the catcher’s glove. I took a few photos of the pre-game routine before yielding the camera to Son@Night for his own photo-journalism and blog. 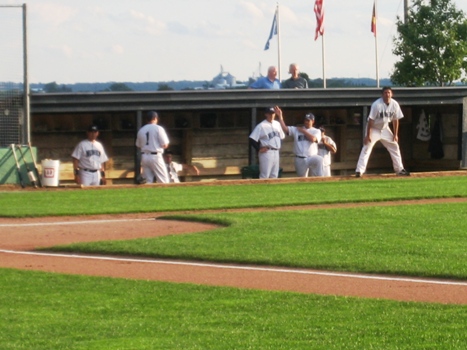 When the game begins I decide not to keep score but to simply let the game wash over me like the sun coming in from left field. 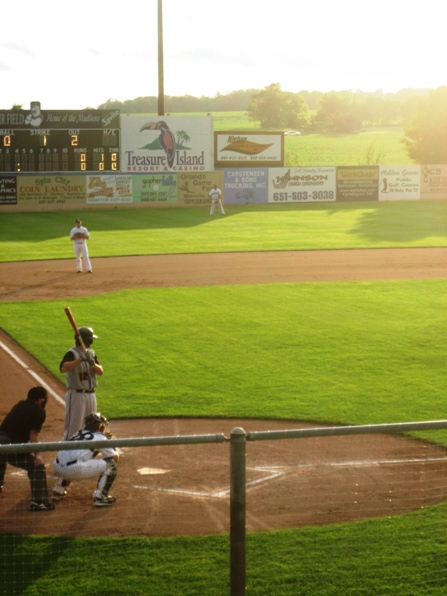 The play and pace is crisp but not compelling. That’s not to say there isn’t any passion or hustle: whenever a foul ball leaves the confines of the park a squad of young boys race after the stray as the announcer reminds the spectators that foul balls returned to the gate receive “cash money.” This appears to be more motivating than, say, carbon credits. Foul balls hit back over the grandstand toward first base land in the adjoining cemetery. As the ball clears the seats the boys are already clearing the stands, squeezing between a fence and a post immediately behind the seats then dashing across the driveway and diving, otter-like, underneath the graveyard gate and popping up to reconnoiter amidst the headstones. I suppose some might consider this combination of energy and avarice somewhat sacreligious for the setting but I think if I were buried there I’d consider the activity to be a feature, not a bug. 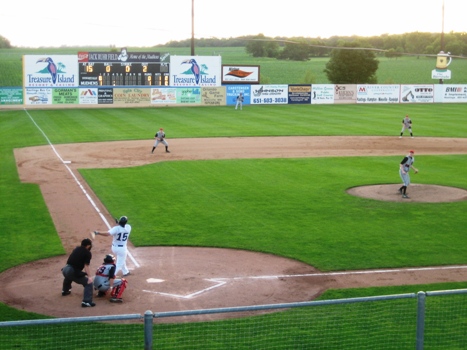 As the game goes on the sun goes down and the lights come up; the temperature also drops and it gets a bit windier. It’s a nice change from the heat and humidty of the previous few days and nights, even if it brings wind-breakers out of hiding. I move around to view the game from different angles while enjoying a malt cup and resisting the seductive aroma of grilled sausage wafting from the concession stand. Fortified by a King Burger I am able to steel myself from succumbing to a bratwurst. I do consider one of my favorite ballpark experiences: eating a bag of peanuts while letting the shells fall where they may beneath my feet. This ballpark is so tidy and well maintained, however, that it just wouldn’t feel right — outdoors or not.

Sitting along the third base line and looking over the right field fence I again notice the acres of corn extending toward the horizon. As the team in home-whites glides on the green grass under the bright lights they seem almost ghostly and I can’t help but think of the movie “Field of Dreams.” If a true ghost were to emerge from this Miesville cornfield and ask if this were heaven, I’d have an answer for him. 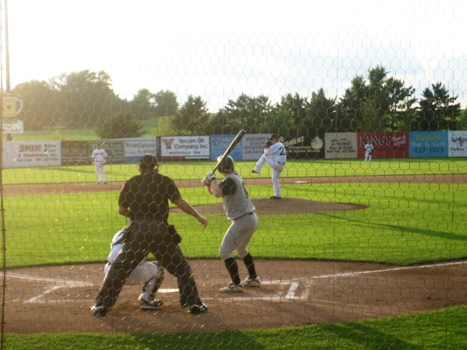