We’re settling into our routine here. We’re all up for breakfast together before Tiger Lilly heads off on her morning commute (a tram and a walk) to her certification program and I shuffle over to the desk to log-in to another day of working from “home”. The two biggest projects on my plate right now are with our European offices, so it’s convenient to be in the same time zone with them for a change. The Reverend Mother typically starts the day scouring various resources looking for an apartment or room that Tiger Lilly can rent (and afford) after earning her certificate, and then she’s off to explore the tram lines and coffee shops, and pick up the daily groceries.

Grocery shopping is a daily occurrence. The refrigerator in our apartment is small, for one thing, but that’s not much of an issue. Urban life without a car changes your habits and perspective. Driving to the store and loading a week’s worth of groceries into the trunk isn’t an option; your hunting and gathering is limited to what you can – or are willing – to carry. Fortunately, small convenience stores really are convenient, positioned near your tram stop and easy to walk in and out of quickly on one’s way home. My wife and daughter make most of the trips out of the apartment on a daily basis, and they are embargoing my sweet tooth. As a result, I’m down 5-7 pounds since arriving here (which is also due to the fact that when I do go out I usually end up putting two or three miles under my feet – and that there’s no elevator to our fifth floor apartment). 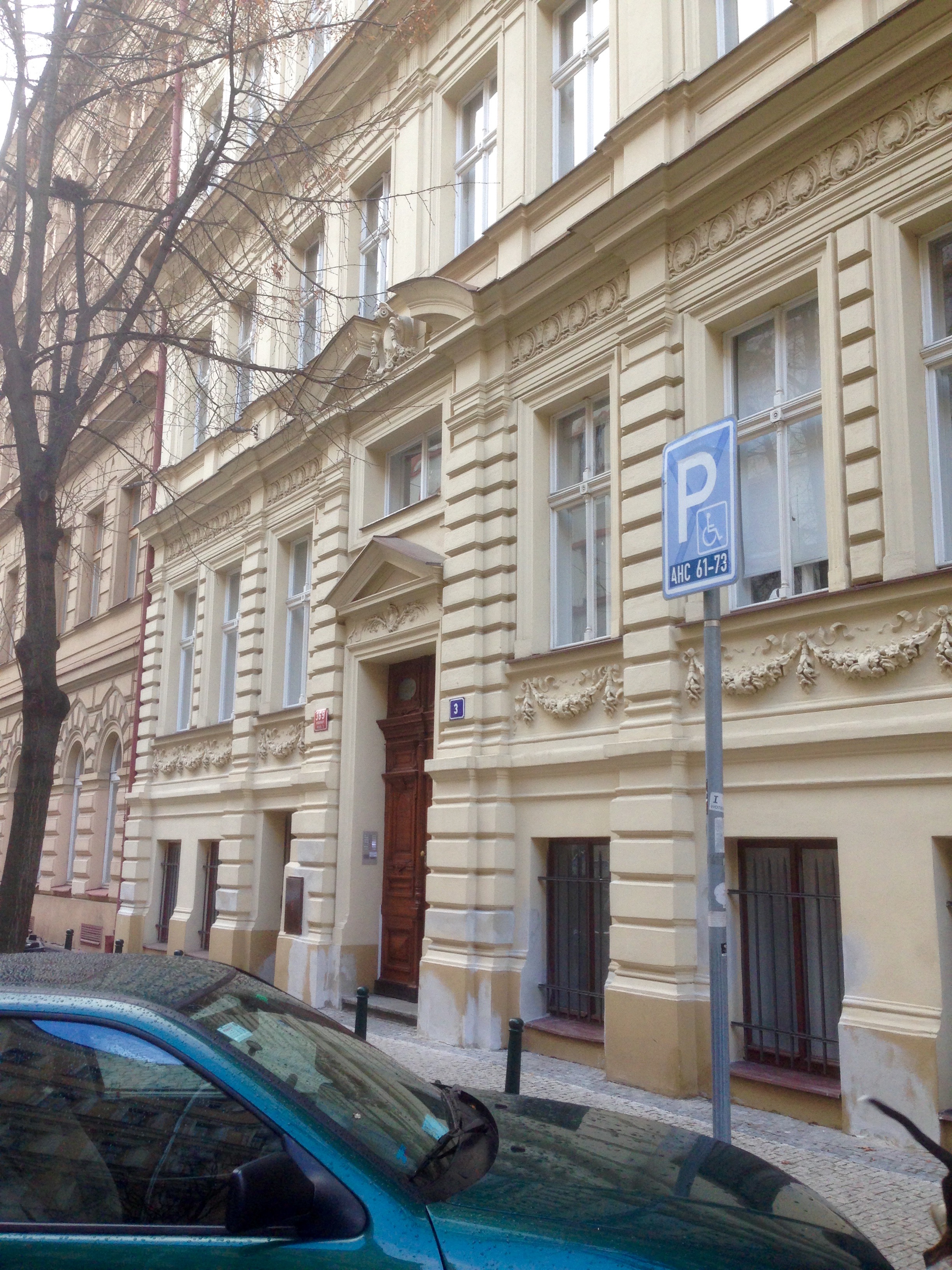 Our apartment building, Záhrebská 3, in Prague 2. Generally the #11 tram stop is right around the corner, but sometimes it comes right to our front door.

The stairs are not as intimidating as they were at first since it has been demonstrated that I will not, in fact, die while climbing them (so far). I amuse myself in the process by noting when I reach “the Crocs floor” which is half-way and marked by the pair of Crocs on the mat outside an apartment door, and also by guessing what everyone’s having for dinner. (Hmmm, fish on the second floor; is that goulash on the fourth?)

The trams are numerous and cover the city well, but we still end up walking quite a bit (see the 2-3 miles reference above, which is about half what my wife is doing). One of the reasons for all the walking is that it is so hard to tell where you are! Even if I map out our exact walking route in advance, it never looks the same down on the street as it does on Google. One problem is that there are very few “grids” here; most streets meander (urban planning wasn’t highly regarded in the 13th century), and the streets change names every couple of blocks. When I want to cheat and check my phone to figure out where we got to this time the signal is usually blocked by all the high buildings. We’ve logged quite a few steps back-tracking. 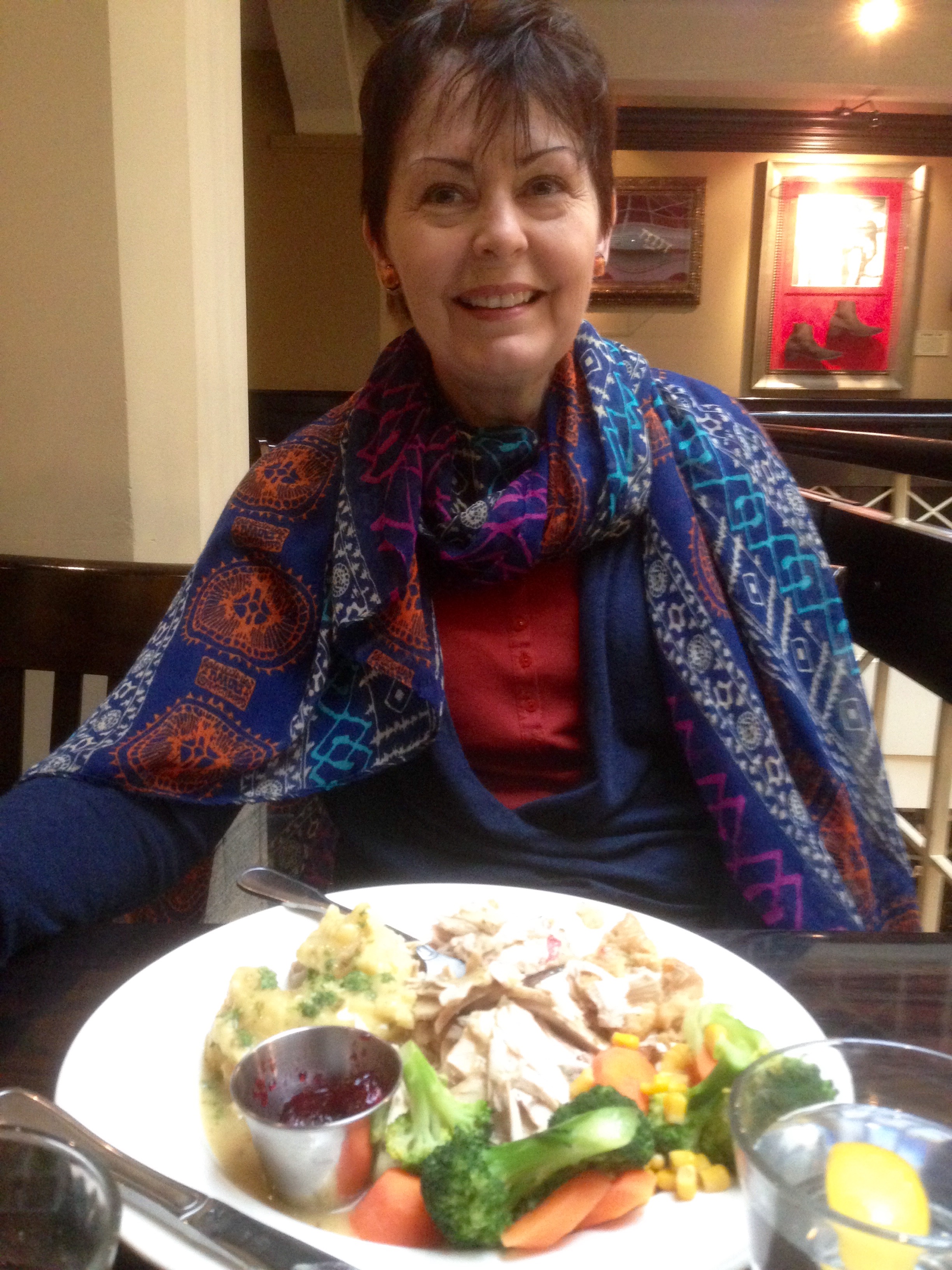 Getting to the Hard Rock Cafe for Thanksgiving dinner was a typical exercise in “WTH Navigation”: from our apartment the Metro station was “2 blocks to the left, four blocks to the right, 2 blocks le- wait a minute, that doesn’t look right.” We made it on time, though, because we left early to allow for misdirection. We enjoyed the turkey dinner with all the trimmings, though, and all the music videos.

Everyone lauds the public transportation system here for its efficiency and convenience. And it does a good job – if you can access it. There are multiple tram lines criss-crossing this un-gridded city and a lengthy trip may take a couple of transfers to get to where you are going. The trouble is, the metro (subway) and tram maps don’t show the streets where you will find the stops or stations. The tram stops often have a street name, but finding that street can be a challenge, as I’ve noted. Aside from the challenges from geography and geometry, there is also the vocabulary.

You want to be sure that when you board a tram or tube that you’re going in the right direction. The way you do this, as in London, New York, Rome, Madrid, etc. – is you look for signs in the metro or on the front of a tram listing the end destination. When we’ve traveled in Spain and Italy, the “foreign” words usually had common roots with English so we could wrap our brains and tongues around them. Here I think the vowels were all confiscated by the Communists and the remaining letters are all dressed up with jaunty little hats tipped at different angles. It’s like trying to read a message of nothing but emojis or emoticons. My trick to remembering the name of the place at the end of the line (or anywhere along the line I need to stop or transfer) is to turn the name into a nickname that I can pronounce in my head. For example, the name of the western terminus of the Metro A-line is Nemocnice Motel (actually one of the easier ones). The Reverend Mother calls it “Nice Motel”, but my nickname for it, given our wandering adventures, is “Finding Nemo”. Feel free to browse the metro map for yourself if you’re not afraid of your eyes getting bloodied. 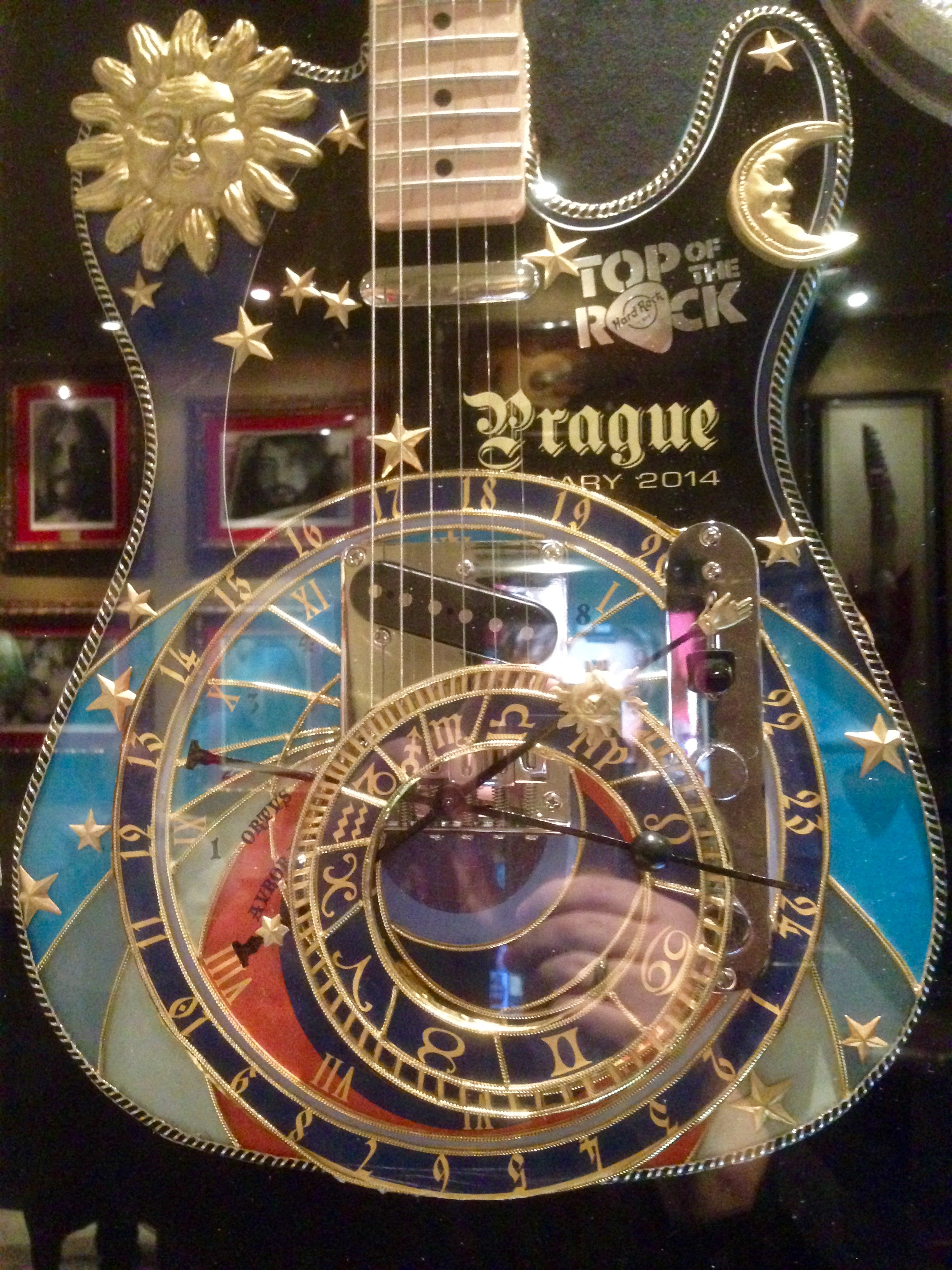 The “Astronomical Guitar” in a display case at Hard Rock, modeled after the Astronomical Clock in Old Town Square, of course, which features statues of the 12 apostles rotating past the windows at the top of the clock at the striking of each hour. If the guitar were played, I’d expect statues of Jimmy Page, Eric Clapton and others to roll by.

If you want to know the REAL secret for getting around the Prague public transit system, here it is: bring a cane. In general, the natives here are…well, I wouldn’t say “rude” exactly; more like “indifferent”. They’re not hostile, but often are not helpful. The exception is when you board a crowded tram, bus or metro line with a cane. Immediately an able-bodied person will jump up from his/her seat and point you into it, even if it’s not a Green Cross handicap seat. And it’s best to move fast because the tram/train/bus drivers peel out as soon as the doors close, and it’s not a gentle departure. You best have your butt in a seat, or a grip like an orangutan. Otherwise they’ll sweep you up at the end of the day like so many old Communist leaflets. It’s weird being on the receiving end of such consideration (especially when I used to enjoy “surfing” from a subway strap), but much appreciated! 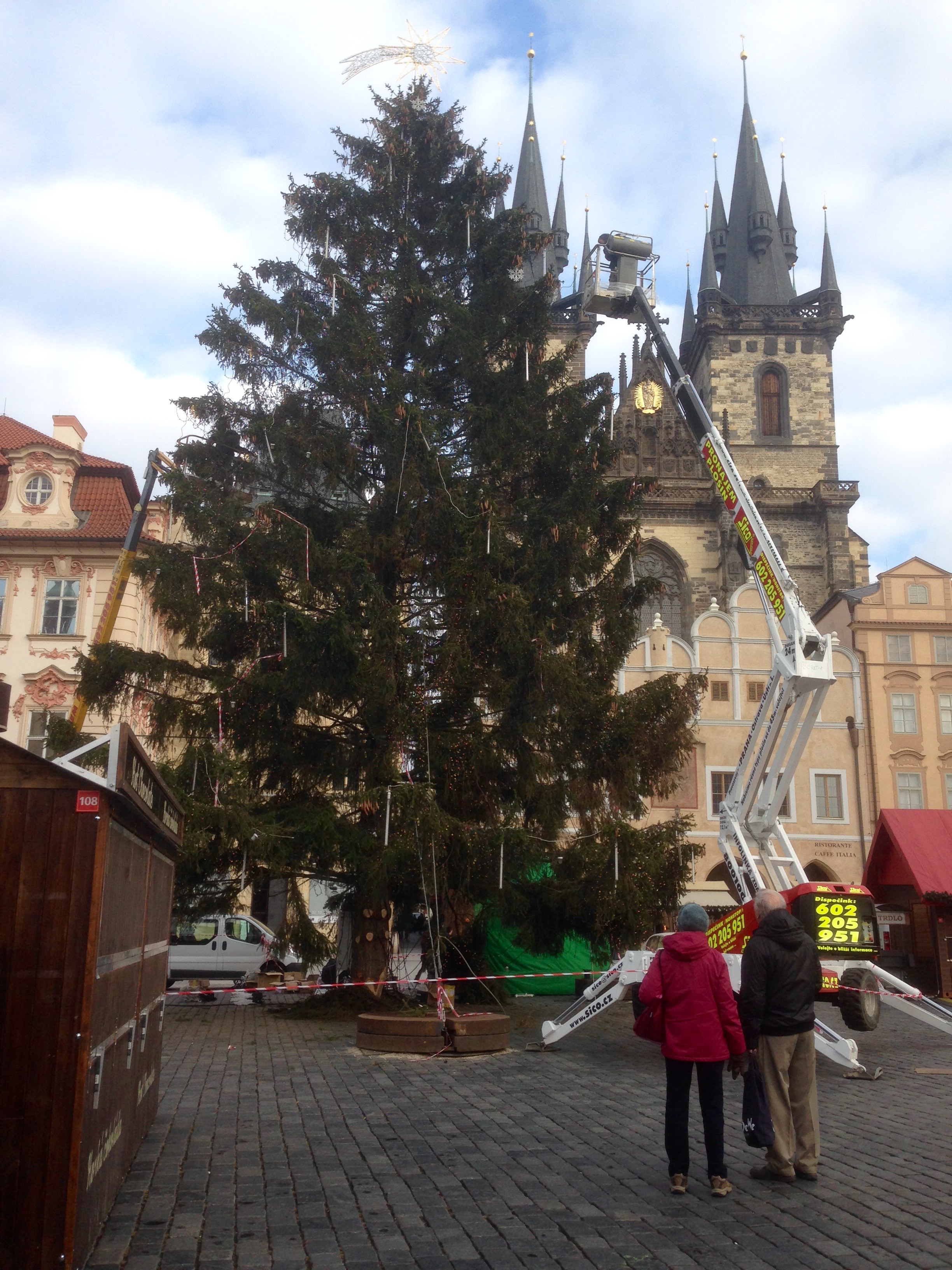 The Old Town Square is getting ready for the Christmas Markets to open this weekend. One of the highlights each year is the lighting of the Christmas tree. The lighting ceremony has been canceled this year because of terrorism concerns. The tree will be lit, but the time won’t be publicized. We happened by after lunch today to see them getting the tree ready. Normally this square is the most wide-open in the city and continually features street performers. For the Christmas Markets, though, the area will be filled with stalls such as the one at left, creating an outdoor mall offering copious quantities of hot meat, trdlo pastries, mulled wine and grog, and gifts and crafts of all kinds. Should be magical. {That’s the Church of Our Lady, btw in the background of this and several other of our photos.) 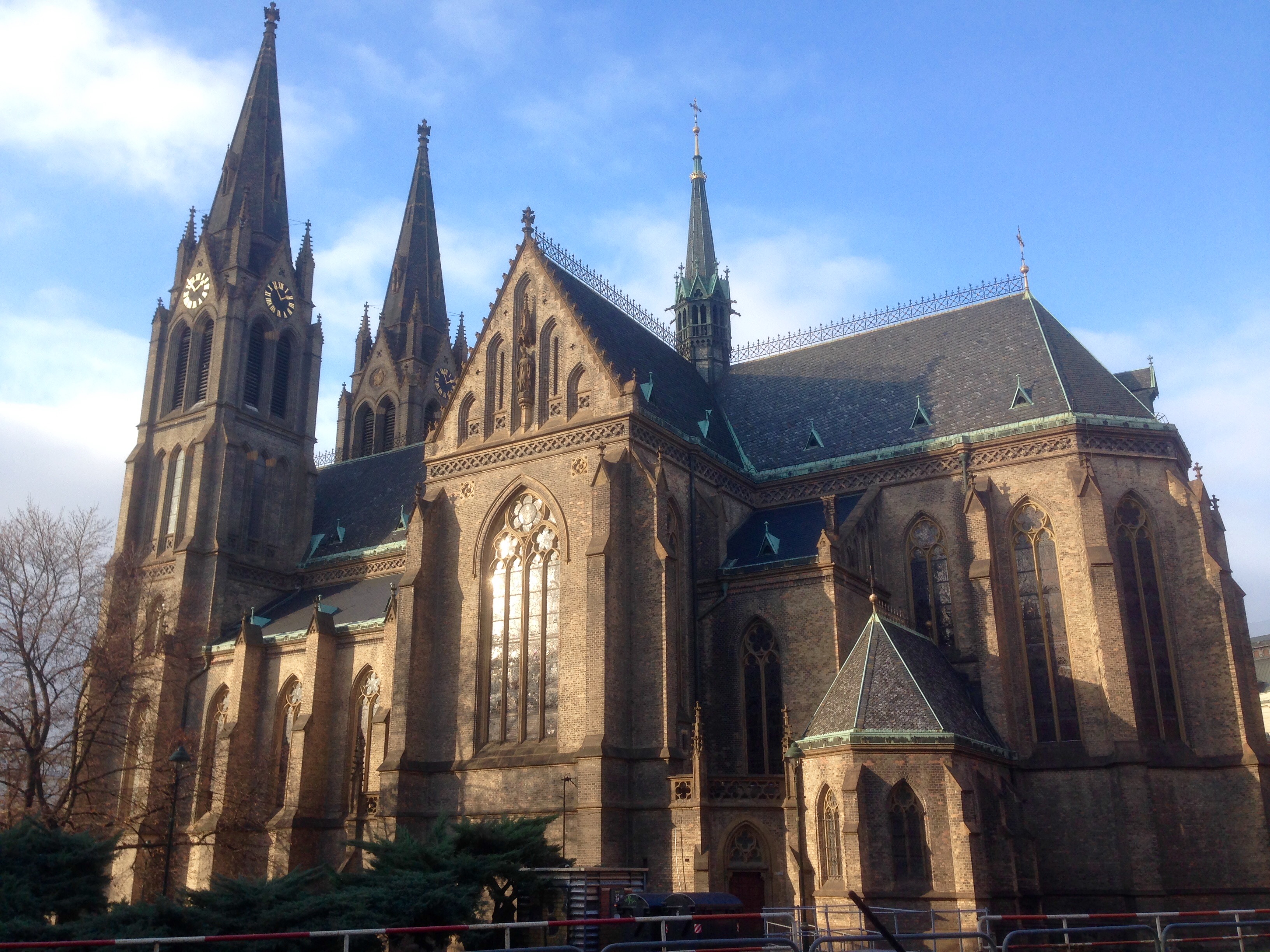 These two towers show up in the background of a few of our photos as well. Here’s the whole building; it’s the Church of St. Peter and St. Paul.