Tiger Lilly arrived on Thursday, a bit wrung out, and we really haven’t had the opportunity to do any sight-seeing as a family until today. Photo documentation is below. The weather is finally cooling down a little bit, but it was still mostly sunny on Saturday. We’ve been enjoying the weather and the off-season “crowds” which makes it easier to get around but with still enough people to add some buzz.

Speaking of buzz, we discovered that cannabis candy is for sale in the convenience stores here, and a package of cannabis tea is in the kitchen cupboard of our apartment. We haven’t partaken, but it’s an interesting contrast. Similarly, there appear to be no open-bottle laws here; I’ve often noticed people walking down the street with bottles or cups of beer.

We had lunch at an Italian restaurant today, just off of the Old Town Square. We knew it wasn’t going to be a bargain, but it was close, we were hungry and it was just across the alley from the Museum of Chocolate, which suddenly shot up to the top of our “to-do” list. Of course, the restaurant was in an old, old building, mostly made of stone. The upstairs “dining” room held three tables, and we were directed downstairs to a much larger eating area. The dimly lit stone stairs spiraled down between old stone walls as if we were going to the catacombs and I suddenly had the creepy notion that a devious old guy was just ahead, urging me to “Try the Amontillado!”

Instead I had a very nice Pilsner beer. The CR is known for its beer because the soil of Bohemia is ideal for growing excellent hops. While we stayed at the hotel earlier this week I had a very crisp and refreshing beer called Staropramen that was very tasty. While I tend to favor ales after my days in England, I have decided to try the local offerings and compare – especially the unfiltered beers which don’t travel well and need to be enjoyed right here. I had a Kozel with my dinner tonight and it was similar to Staropramen, but a little maltier. I have a Pilsner Urquell (the most popular brand) and a Gambrinus in the refrigerator right now, awaiting their turn. I did have a sobering moment today, though. The Czech name for the Old Town is “Staromestska”. I wondered if “Staro” is the Czech word for “Old” – and if in my praise of Staropramen I was unknowingly honoring the local version of “Old Milwaukee”. I’m gonna go brush my teeth now. In the meantime, enjoy the photos of Tiger Lilly’s first tourist day. 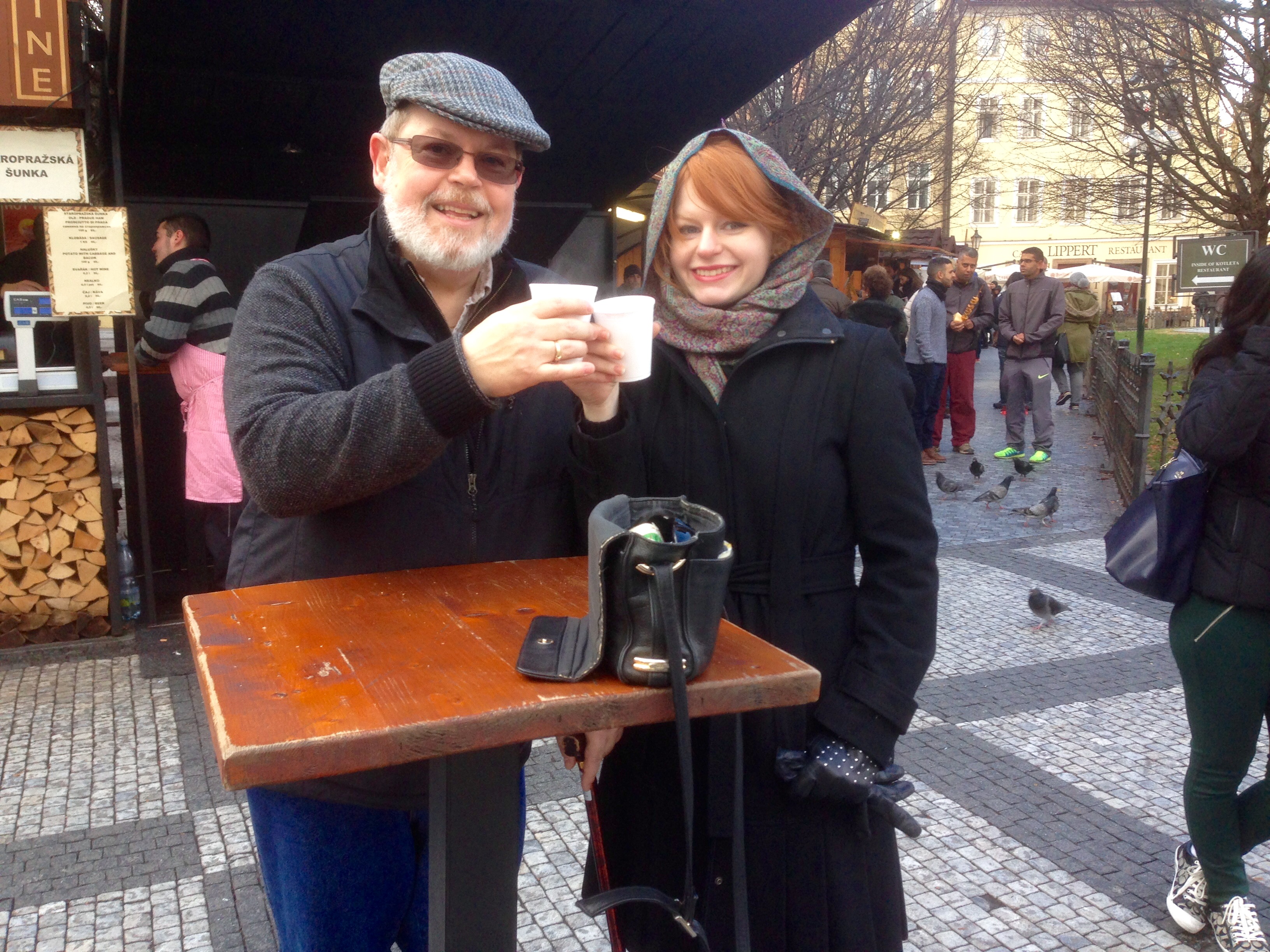 Three years ago my daughter first started thinking about moving to Prague. It’s a long way from a pipe-dream to a lead-pipe cinch, but – lo and behold – here we are. The first couple of days since she arrived in Prague were full of activities related to her program, finding groceries and learning how to get around. Today we really got to to some sight-seeing, which of course started with the Old Town Square. Here I bought her a hot honey-wine to officially celebrate a dream come true. 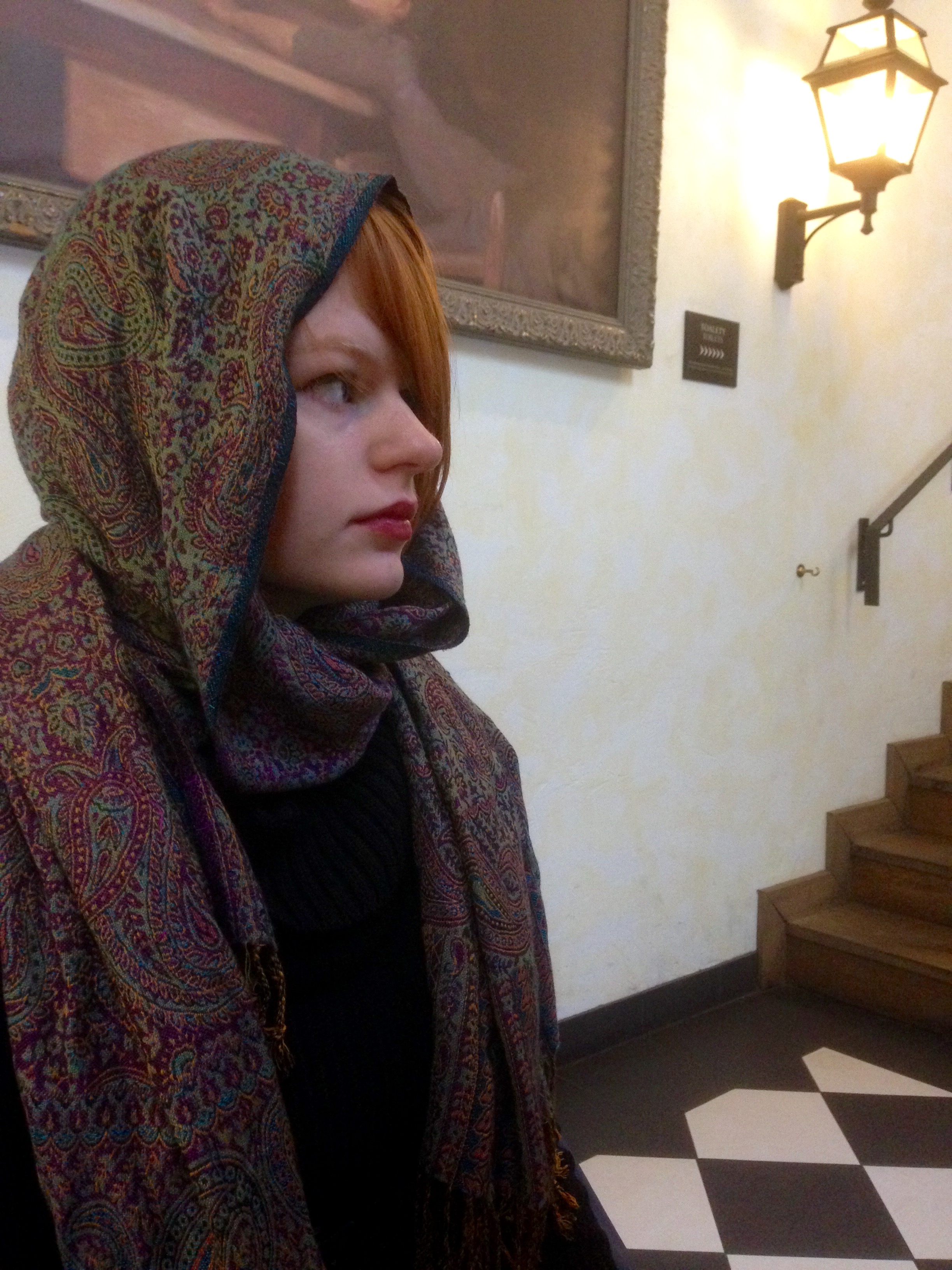 So…three years of planning, working, saving – you’d think she’d look happier now that she’s here. Or it could be she just wants to try on the “look” to fit in. What could possibly cheer her up? 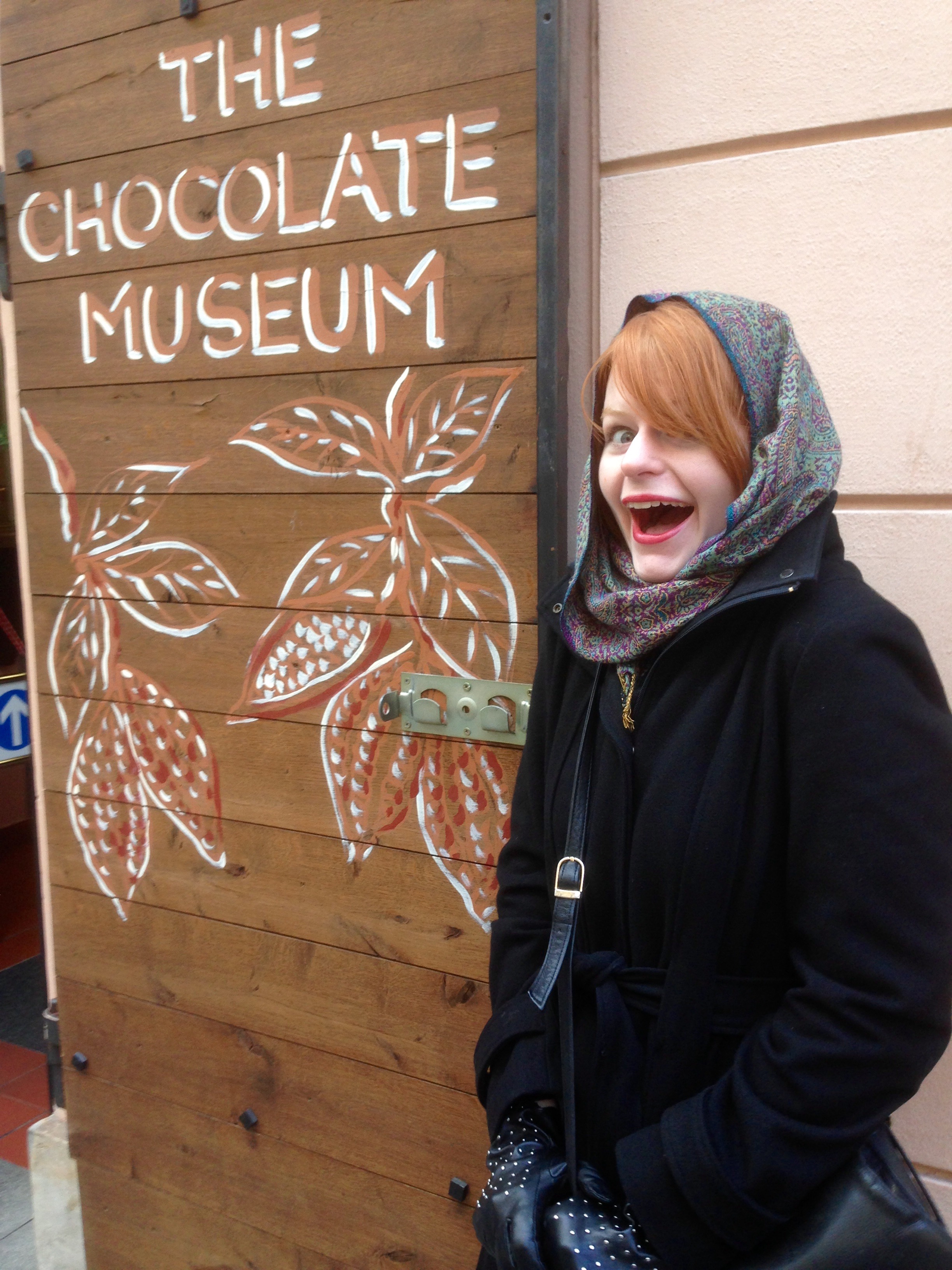 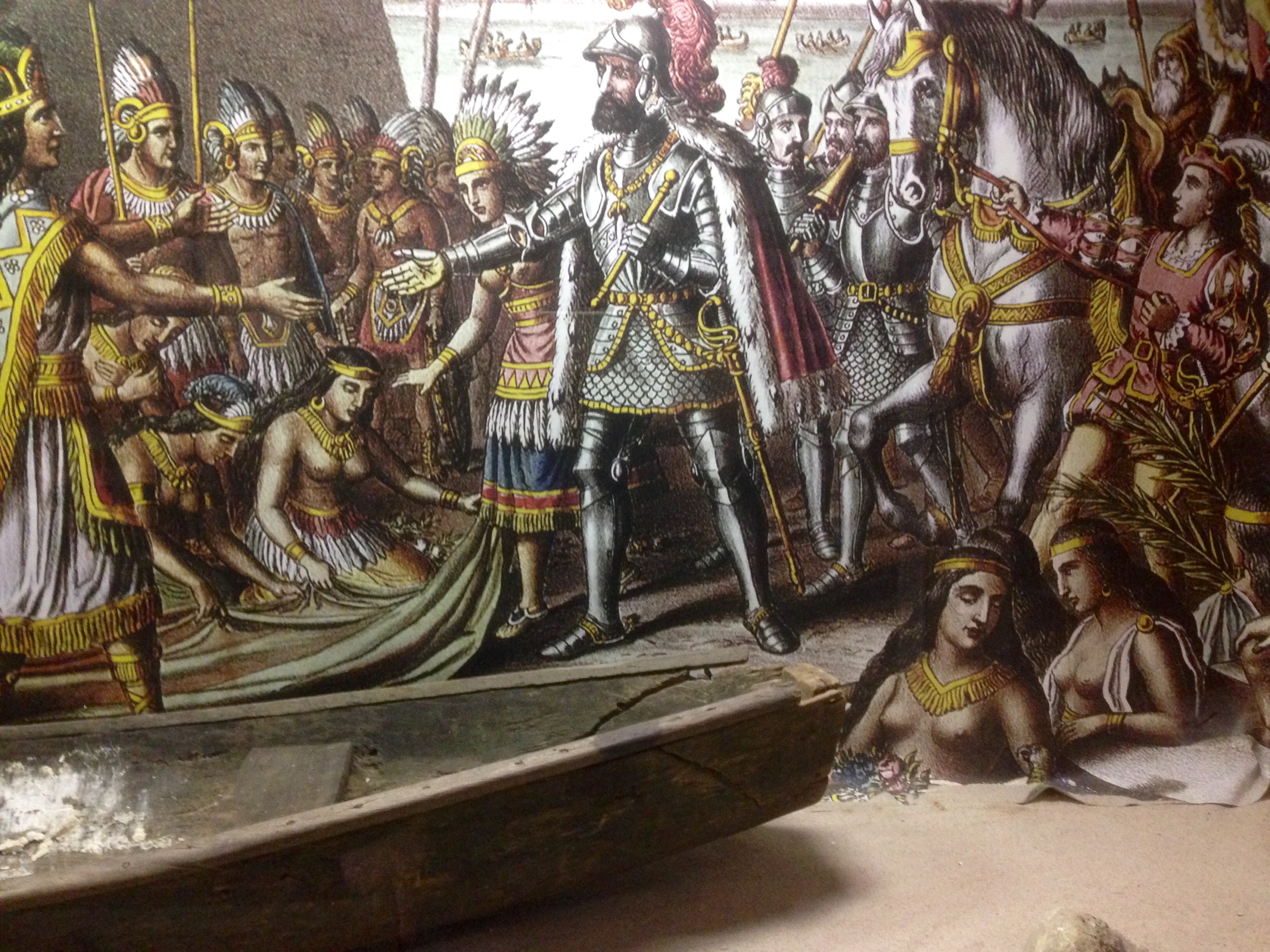 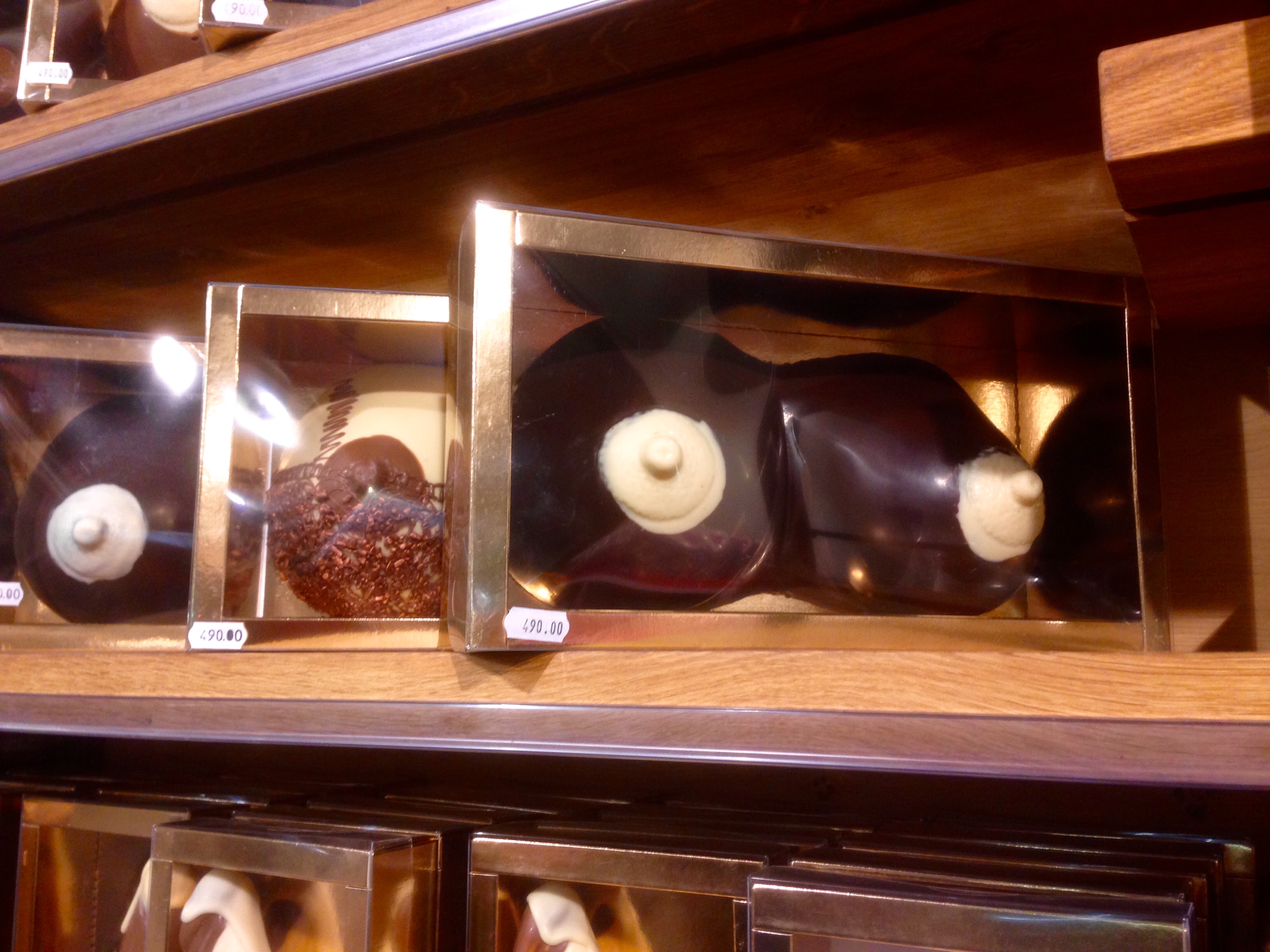 The gift shop at the museum has its own homage to that great, historic moment. 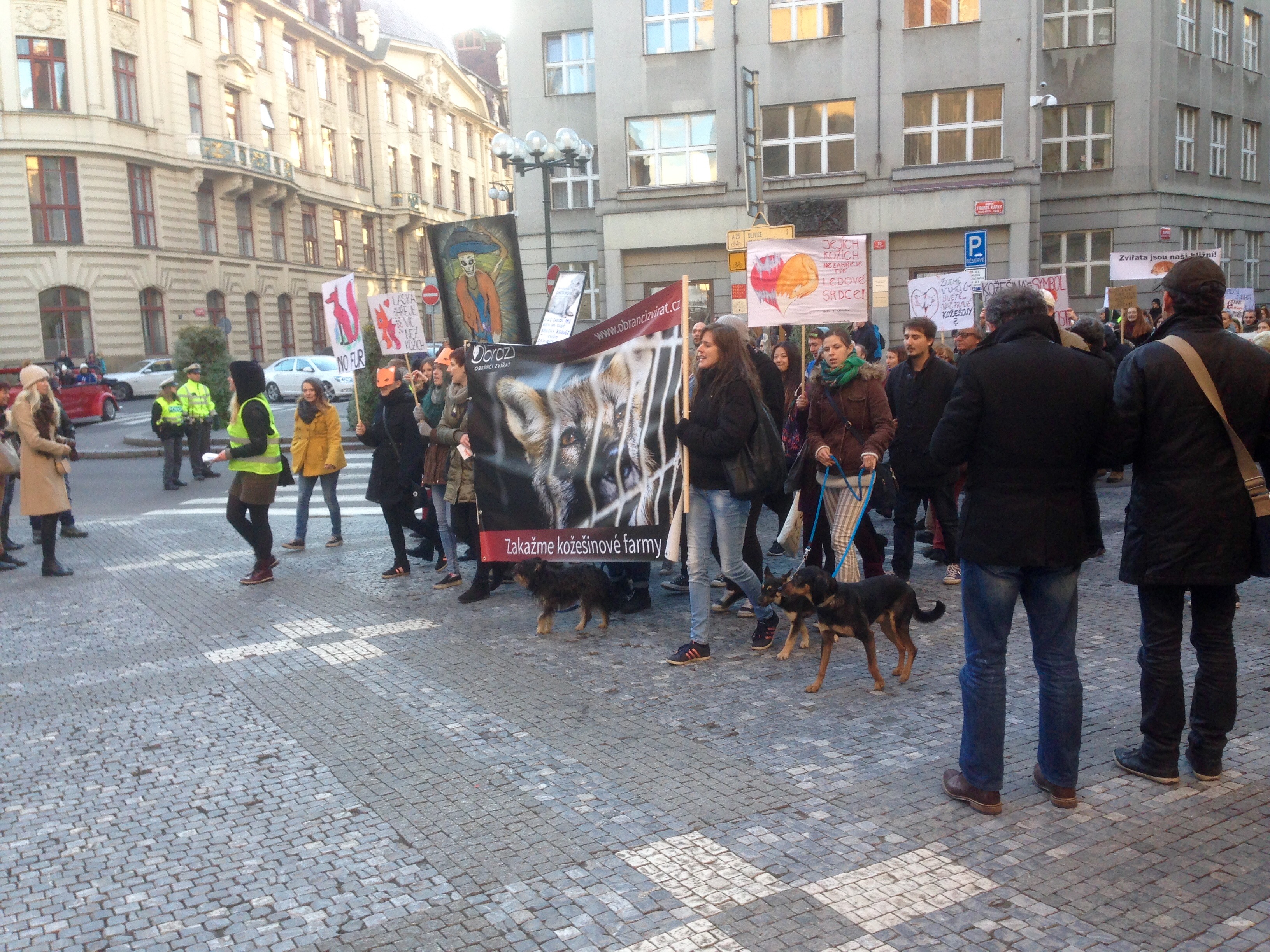 As we were leaving Old Town Square we had to step aside for an anti-fur protest march. My wife mused that she should have had her fur coat on. As she did so I noticed that she was standing right outside the Kafka Cafe. Not exactly “Kafka-esque” but it was kind of funny.

Prague has often stood in for Berlin in the movies, especially in WWII films. Today the corner outside our apartment building was blocked off as a film crew shot a “Nazi rally”. The name of our street and our building number were covered over with German signs. Tonight the filming goes on in the street right below our windows – we can see the bright lights and the guy swinging a smoke machine, and hear the shouting of the actors from up here in our apartment. I don’t know if it’s for a movie or a TV show, but it would be both fun and weird to be watching a show sometime and to suddenly say, “Hey….!” 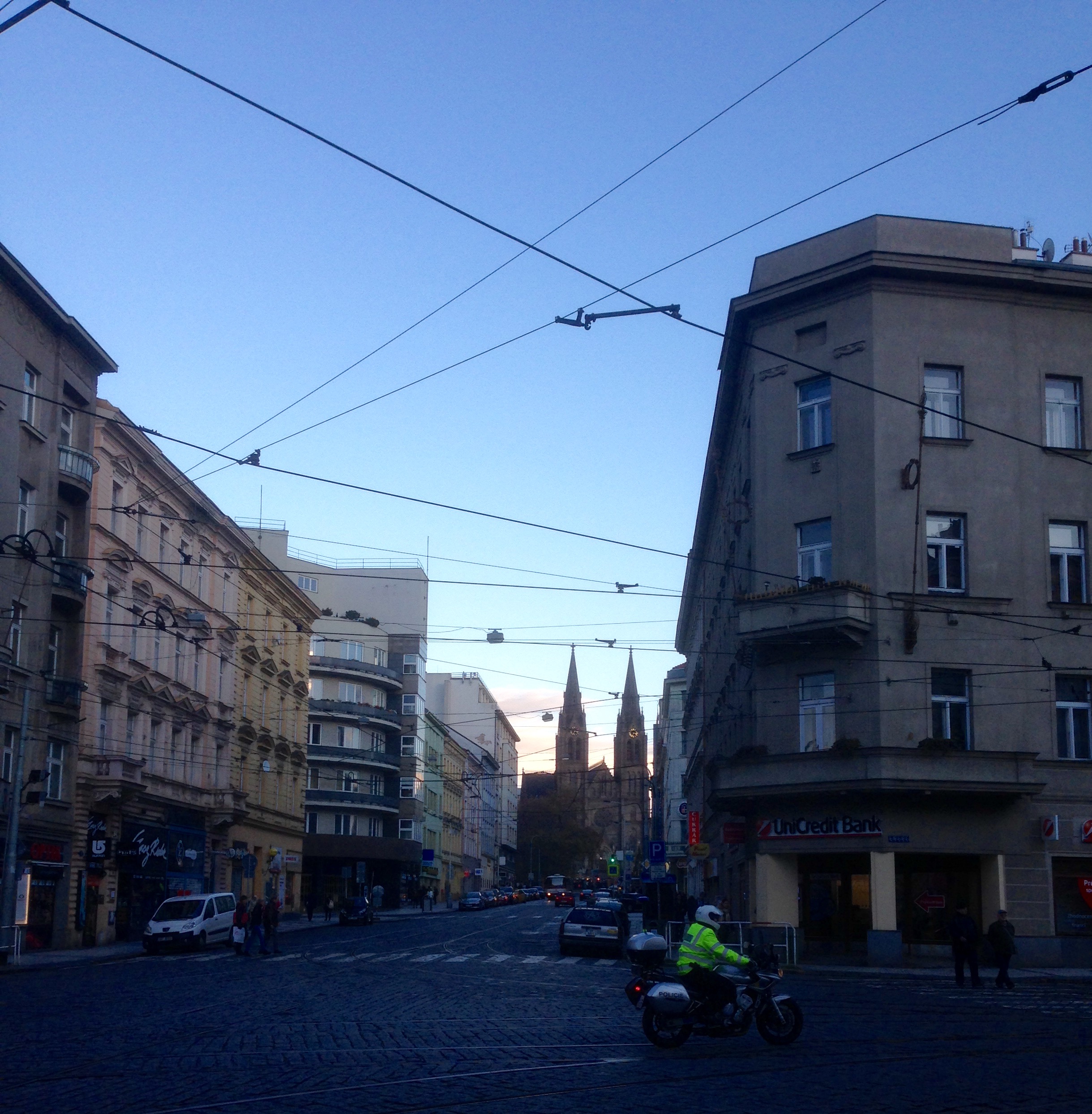 One of Prague’s many names is “The City of 1000 Spires”. Here are just a couple of them in the distance. It’s one of the cool things about being in a city like this; even the ordinary street scenes can surprise you with sudden history, art and architecture. 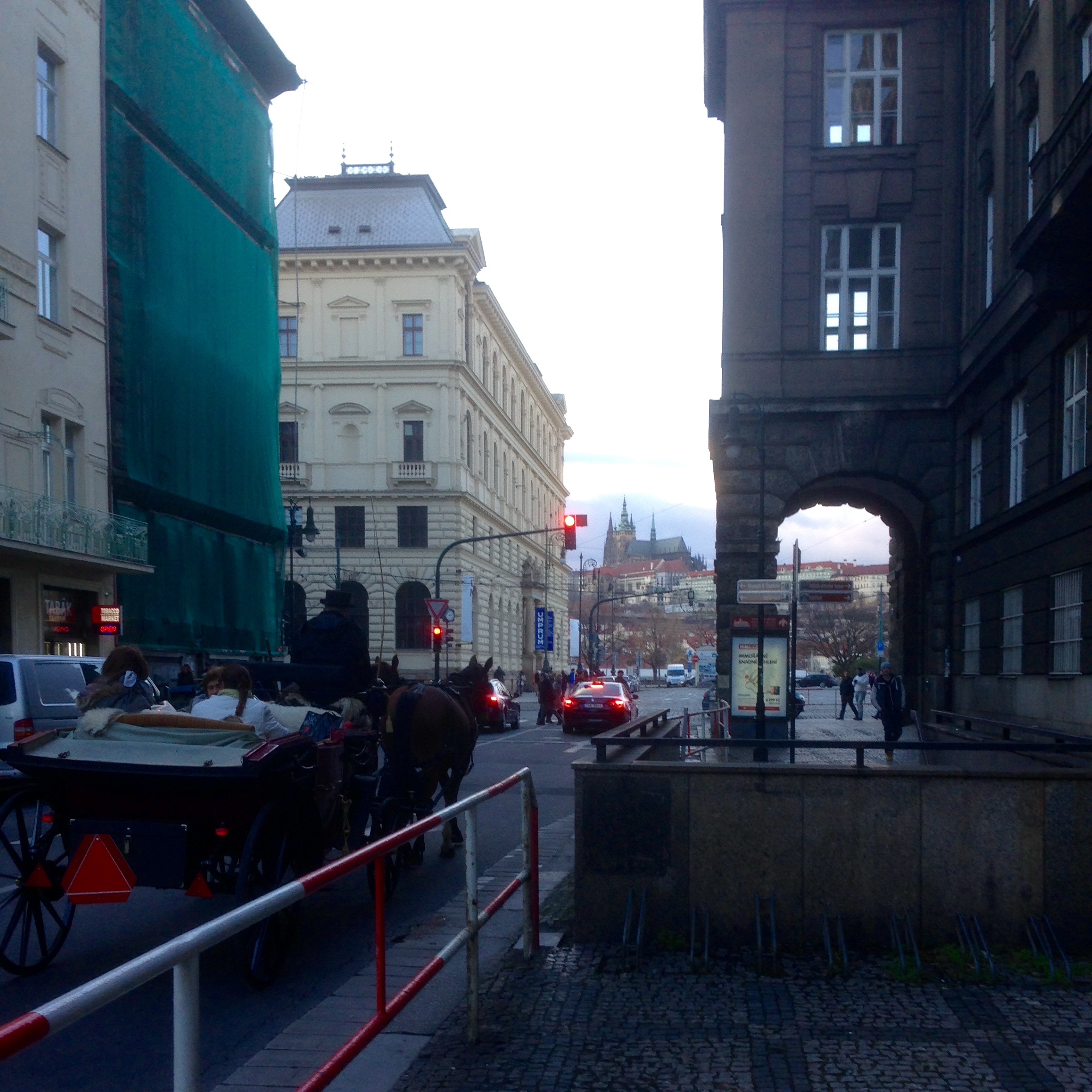 There’s just the one castle, though (that I know of). It does tend to work its way into photos, though. 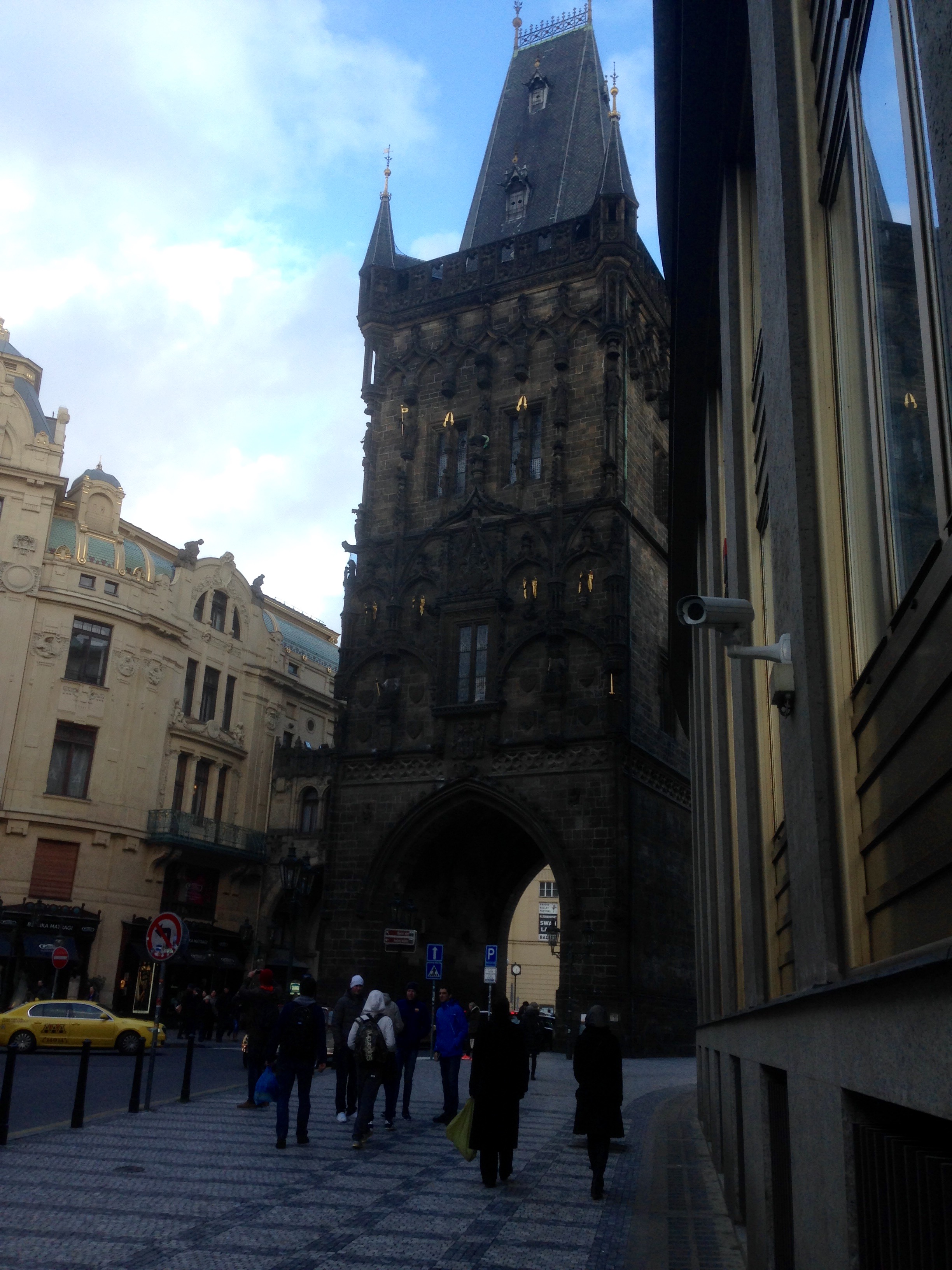 The Powder Tower, at the periphery of Old Town Square, and the place where the Kings of Bohemia started the procession to their coronations.

One thought on “A newbie in the Old Town”