This blog is still in tourist mode as the Reverend Mother and I roam Prague seeing the sights, trying new food, going the wrong way on the tram and trying to figure out how to pronounce words with four consecutive consonants. There’s nothing like seeing a billboard in a completely incomprehensible language to make you feel “foreign”. Fortunately it’s not too disorienting as there are a few billboards in English, and even more that are in the international language of boobs.

My holiday is almost over, however, and I will soon be back “working from home” – but from Prague rather than the Twin Cities. This is like a dream come true for me; when I travel I like to try and experience what it’s like to live in a new place rather than just barge through with a camera in front of my face, heading for the next attraction. This probably goes back to my first trip overseas when I was fortunate to have the opportunity to spend a semester at Reading University in England. I rented a room from an English family and hung out with more English kids than American ones at the “Off-Campus Student Hall”. The hall had showers, a laundry, social and studying areas, and even it’s own pub which was staffed by students. I took up darts, a tweed cap, and a liking to real ale. I even took a turn tending the bar.

Later our best times in Italy where when we stayed at an agriturismo in Tuscany that was also a working olive farm and winery. When we went to Spain we spent a week with the Pueblo Ingles program, speaking English to Spaniards who’d signed up for an English Immersion week to improve their language skills. It was a well organized and interesting week and we learned so much about the country, it’s culture and history by talking to the “students”. After the program we rented apartments in Madrid and Barcelona rather than going to hotels in order to get closer to “street life”. Going grocery shopping, doing laundry and other common things while also sight-seeing has been a great way to get a feel for a country from, perhaps, 5,000 feet instead of 10,000.

The other thing I always do when I travel is to stand at certain spots and try to imagine what happened there, from the epic to the mundane, in the past. Sometimes I imagine spooling time backwards like a movie rewind. How great would it be to stand on Stirling Bridge and watch William Wallace rout the English, or sit in the plaza in tiny Dicomano in Tuscany on market day and imagine the sights and sounds from 500 years ago? This urge is especially strong in Europe where so much history is layered so densely in relatively small spaces. This is certainly true of the Czech Republic as well, with the added texture of so much more recent and world changing history. Today (Nov. 17) we stood in Wenceslas Square as the country celebrated a national holiday in honor of the Velvet Revolution in 1989 that freed the country from the Soviet Union, made all the more poignant by the non-velvet iron fist of USSR’s crushing of the “Prague Spring” in 1968. The history here beats, breathes and bleeds all around you and I am eager to immerse myself in it over the next 8 weeks.

I am also eager to share the experience with you here through regular postings that will be part travelogue, part monologue, and hopefully part dialog. Please feel free to share your comments and especially your questions in the posts here. We’re not going to have time to look up distant cousins for you, but will try to respond to your curiosity! 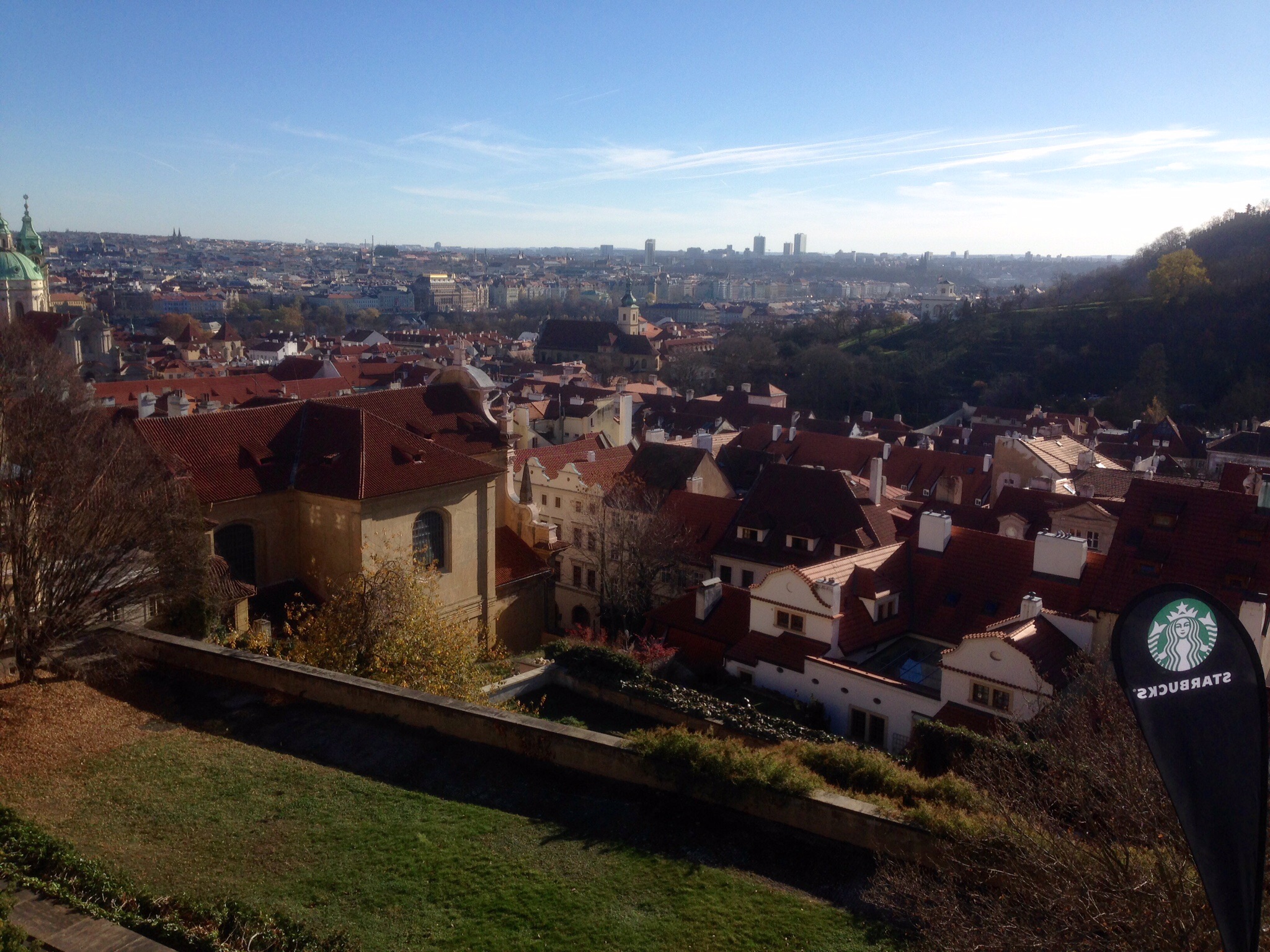 Taking the view of Prague from the Castle; charm, culture…and Starbucks. 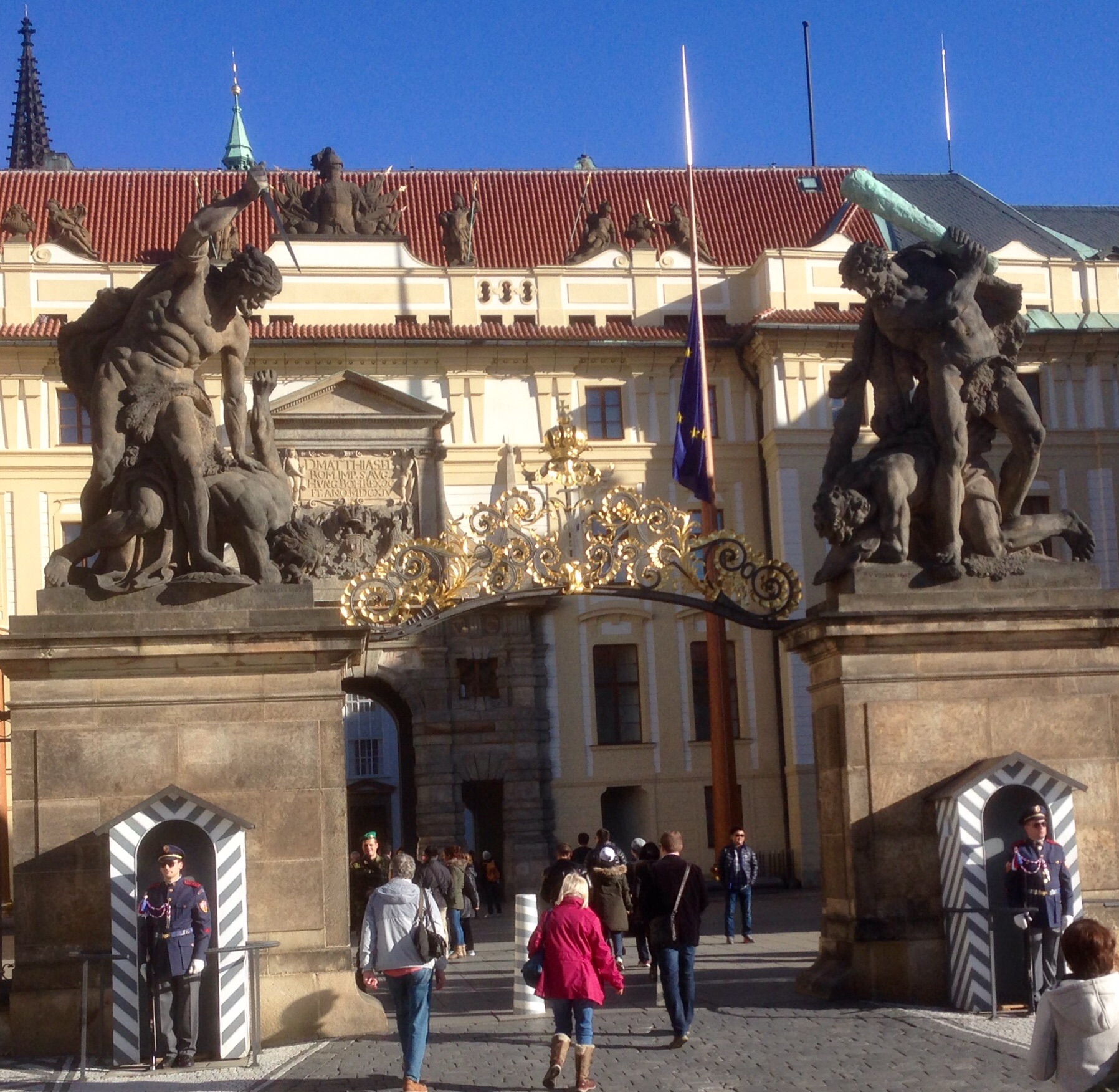 Approaching the Castle, the sculptures offer a clear warning of what happens if you try to sneak in without a ticket. 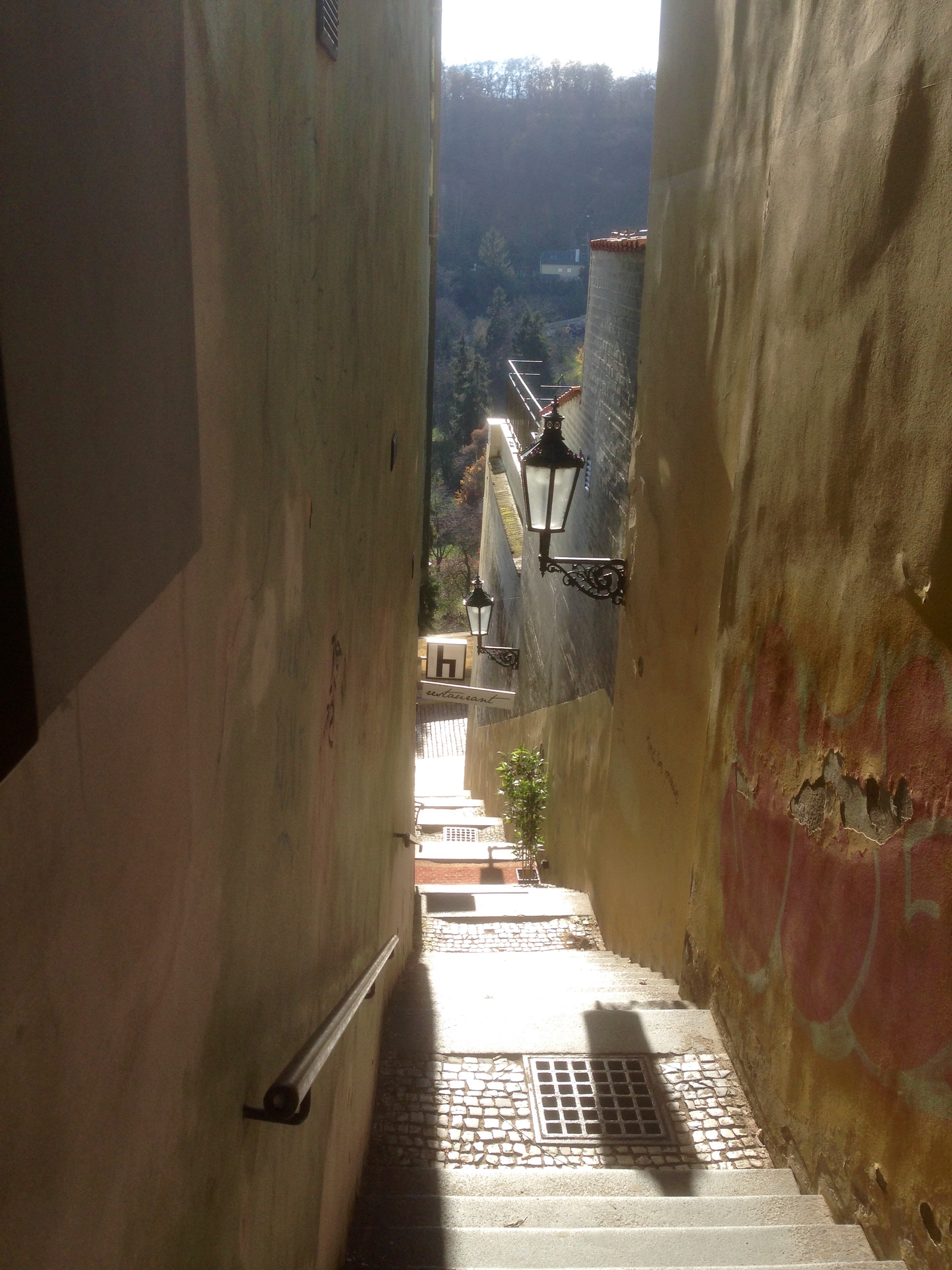 There are a lot of views in Prague that can jump out and take you by surprise, such as this one in the Castle district. For me, though, this one was strictly “look, but don’t touch.” 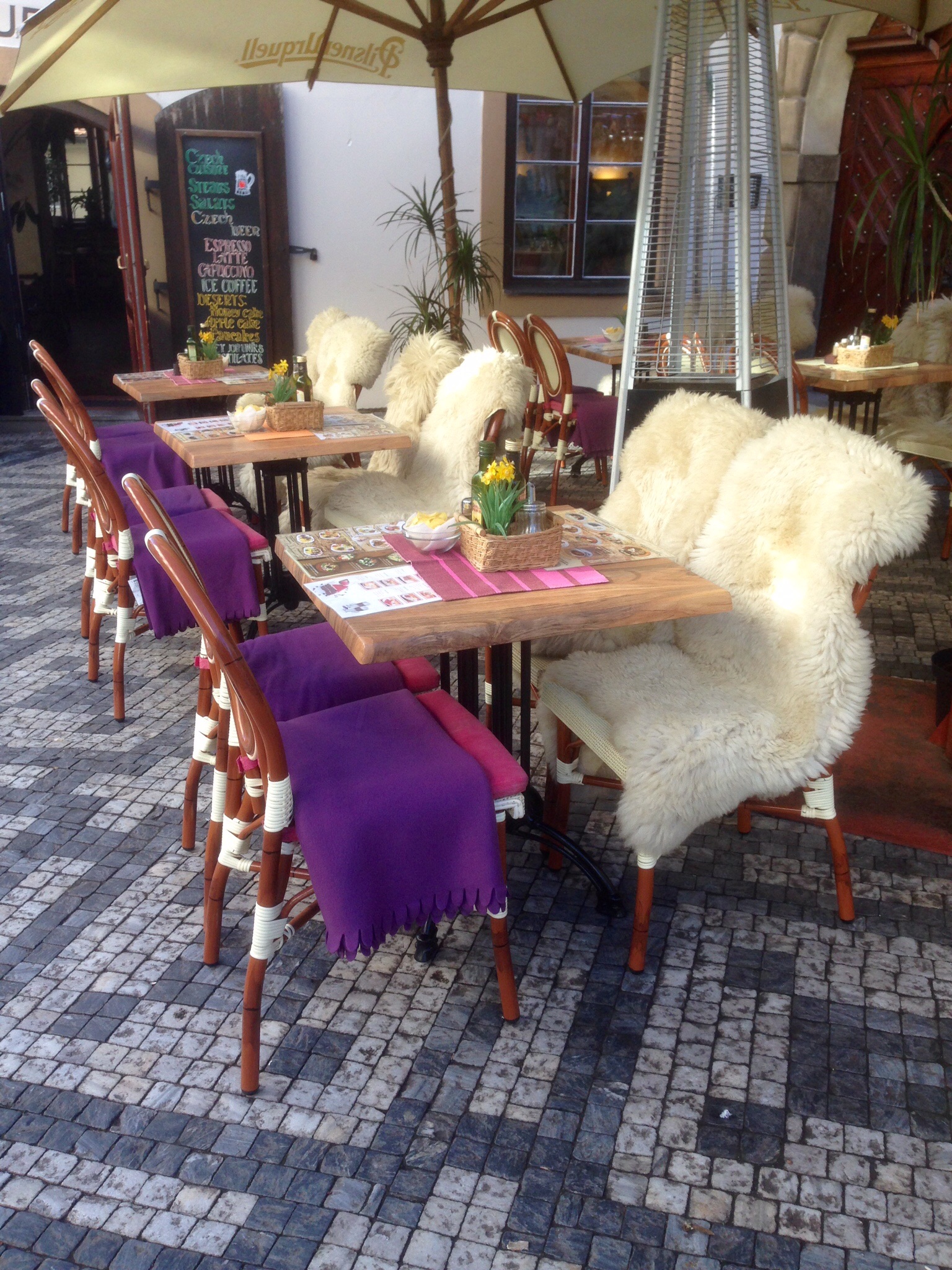 Prague is enjoying the warm autumn weather. Temperatures have been in the 50s (F) this week, extending the sidewalk dining season. The inviting heater, fleece seats, lap robes and hot mulled wine are also worth a pause. 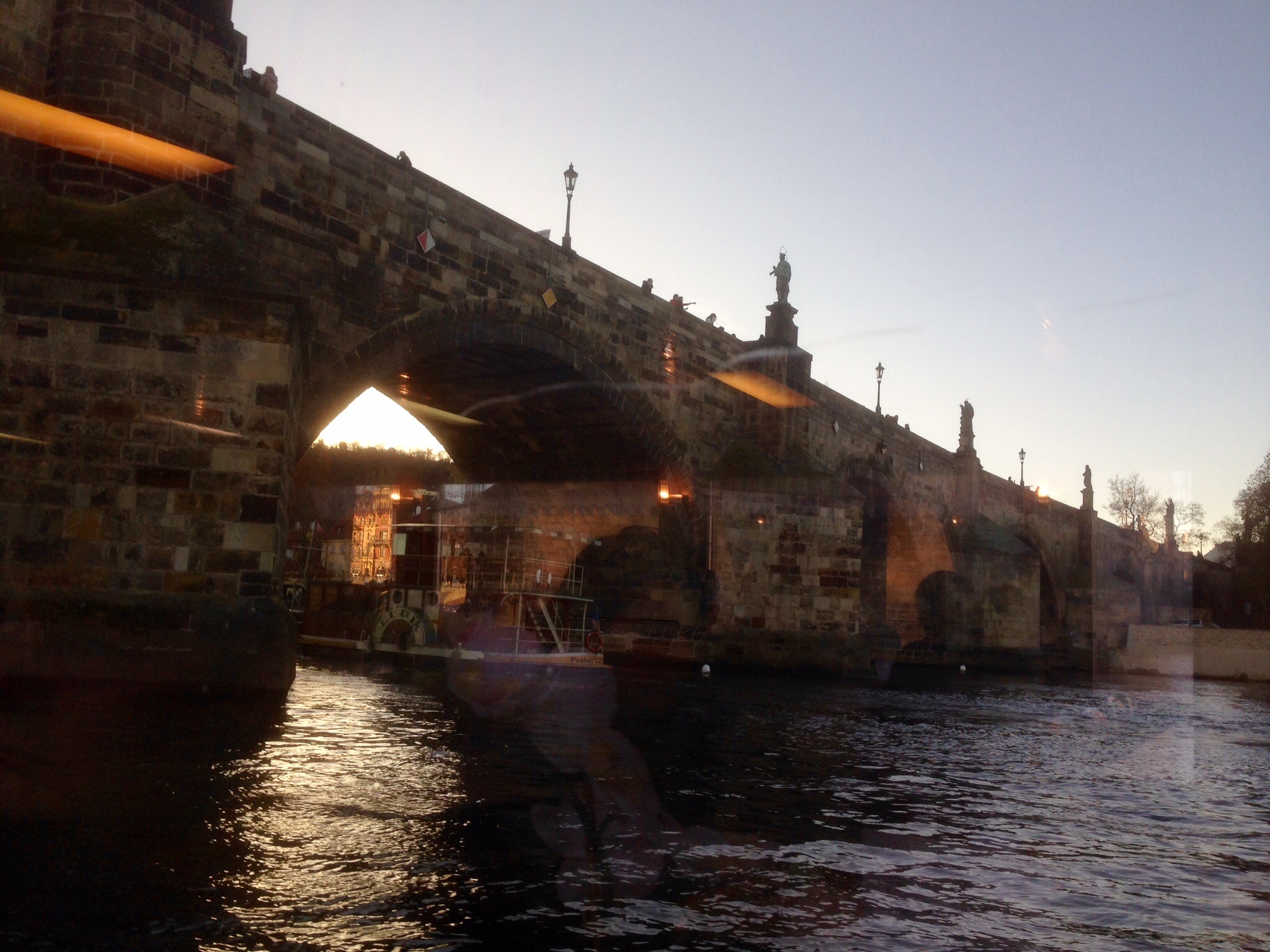 Prague is also a city of bridges, and the most famous is the Charles Bridge. We were able to get a little more unorthodox view from river level, even though the photo had to be shot through the dirty glass of the tour boat. I like the light, though. 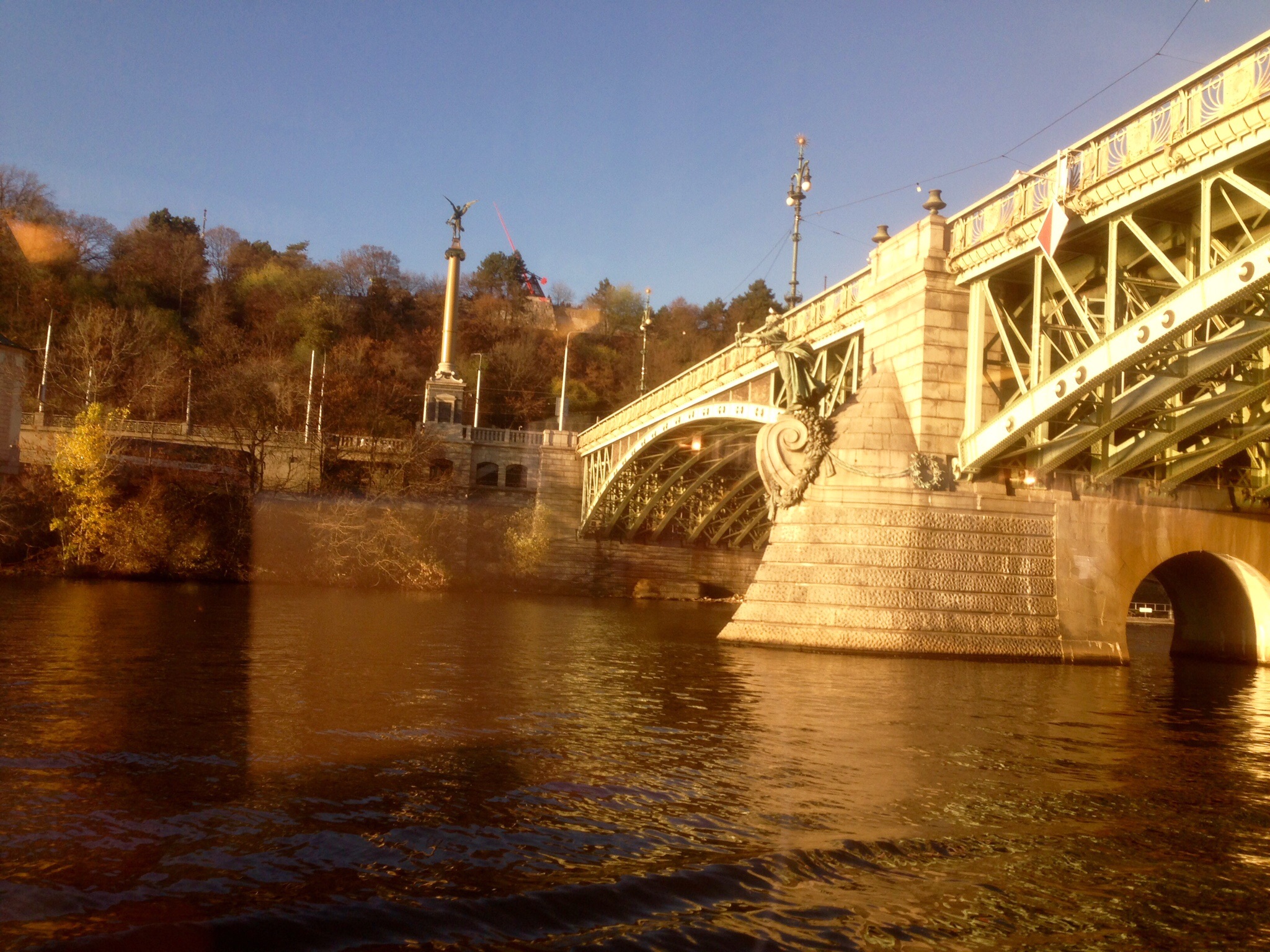 The most ornate bridge in Prague, however, is the Art Nouveau Èech Bridge, named after Czech poet and writer Svatopluk Jones, I mean, Èech. 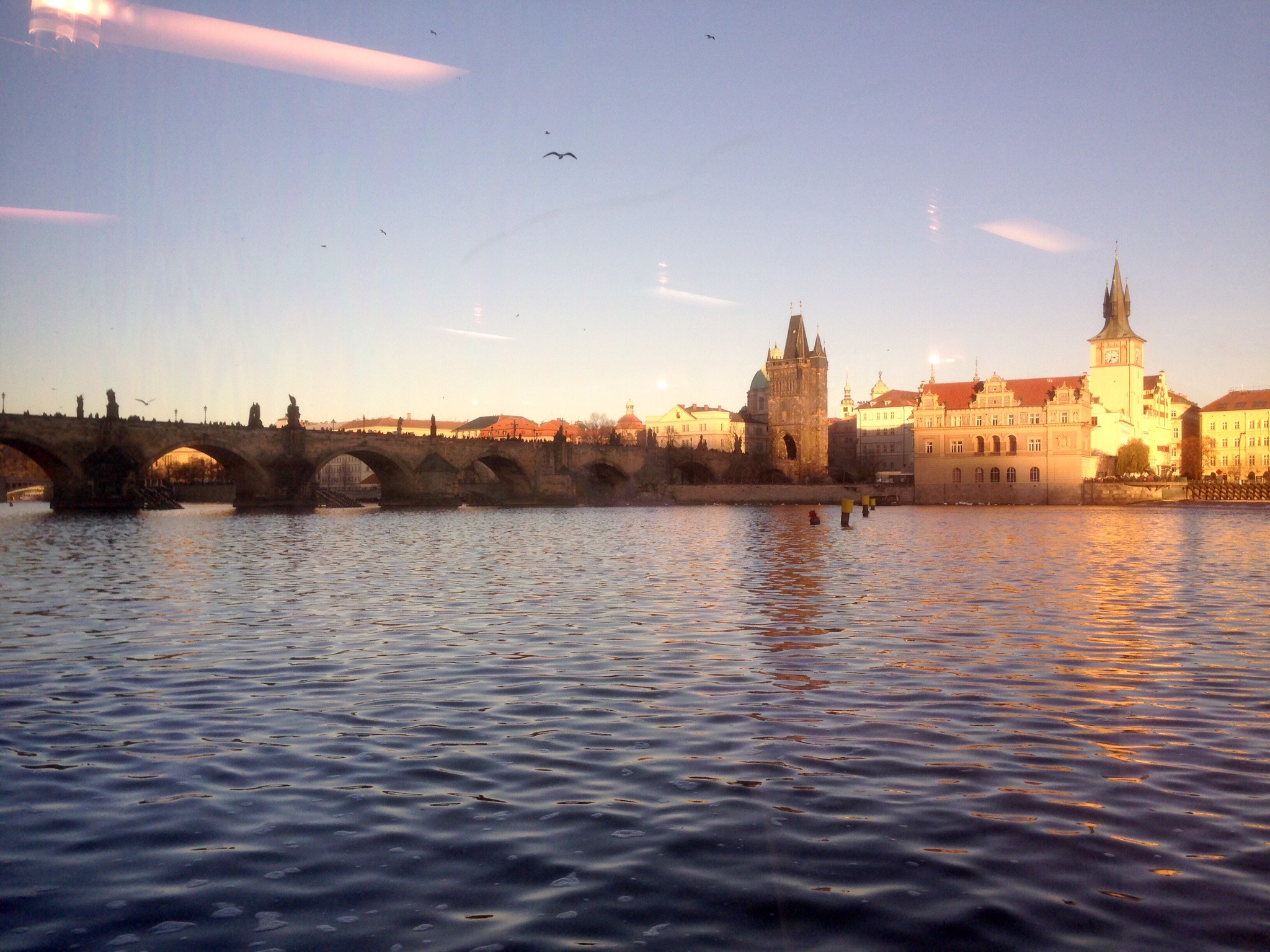 Another view from the Vitava River, through the tour boat glass. 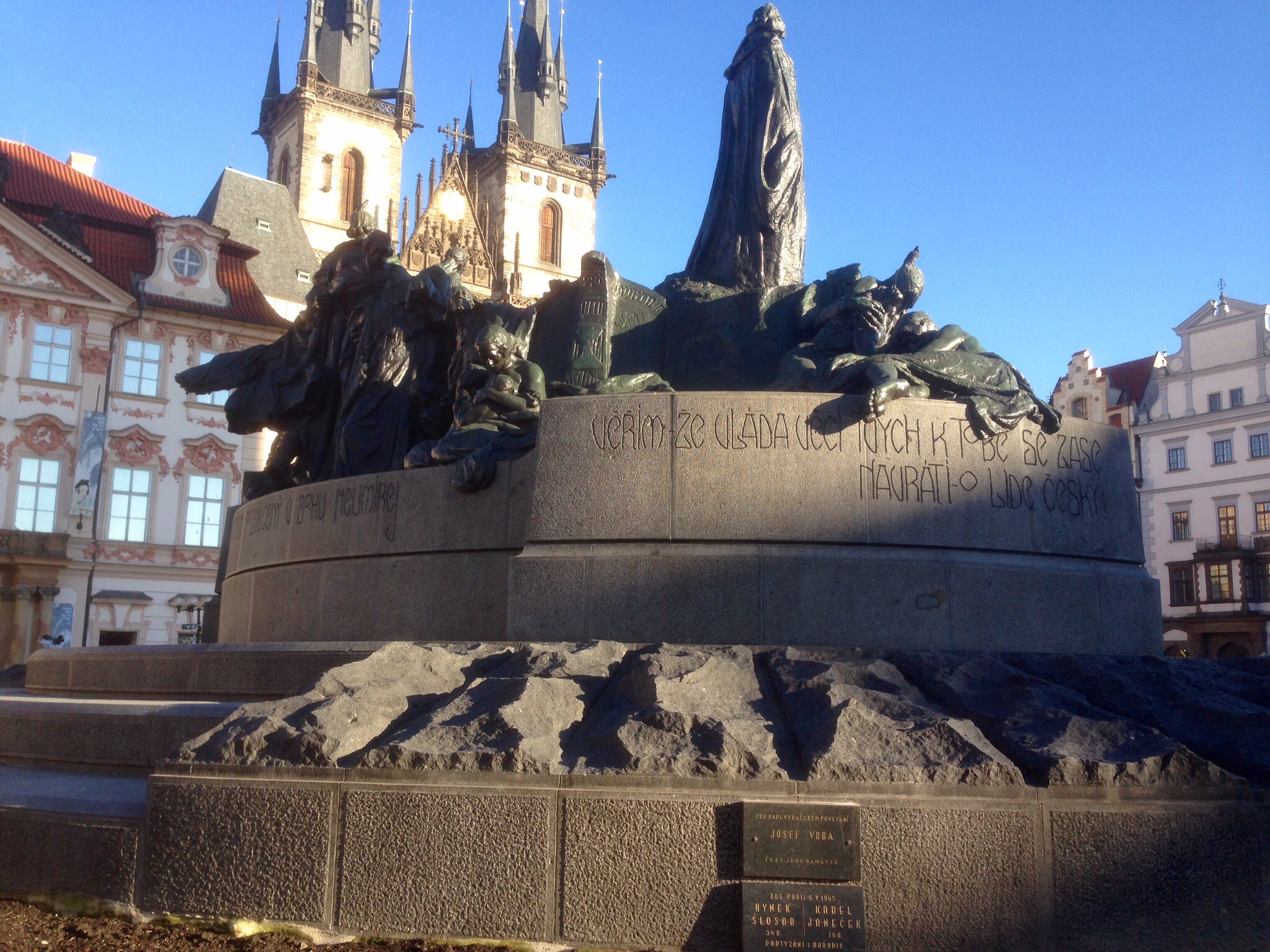 The monument to Bohemian reformer Jan Hus, an antecedent to Martin Luther in terms of the Protestant Reformation. He was given a guarantee of safety to meet with Church leadership, only to be burned at the stake. His monument is in the Old Town Square, not far from the old town hall where his followers later tossed the mayor and city council to their deaths out of a window in the town hall; the first Defenestration of Prague (there have been at least three defenestrations in Prague’s history, and at least one depontification (thrown off of a bridge). 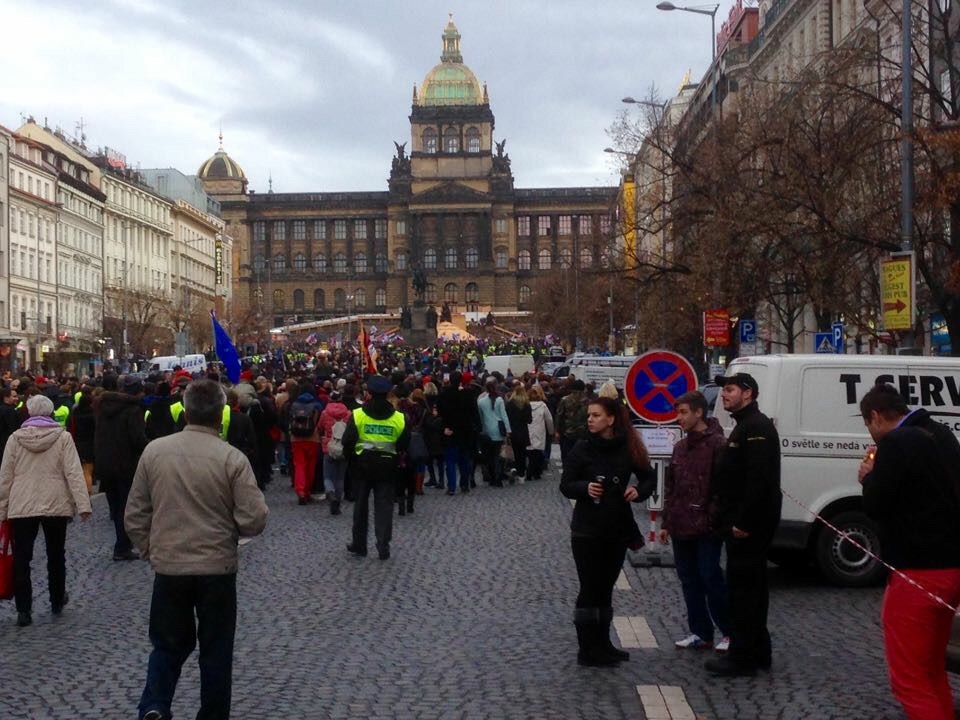 They didn’t throw them from a window or off of a bridge, but the Czechs and Slovaks did kick the Soviet Union out of the country as a result of the Velvet Revolution of 1989. Nov. 17 was the date the revolution started, and it is now a national holiday. It’s also the day we visited Wenceslas Square to see the celebration, which typically includes some political demonstrations. This photo shows one such gathering. The speaker was angry, the crowd around him was chanting, but the police and most of the other people in the square seemed bored. (The police – or Policie – presence was very large.) 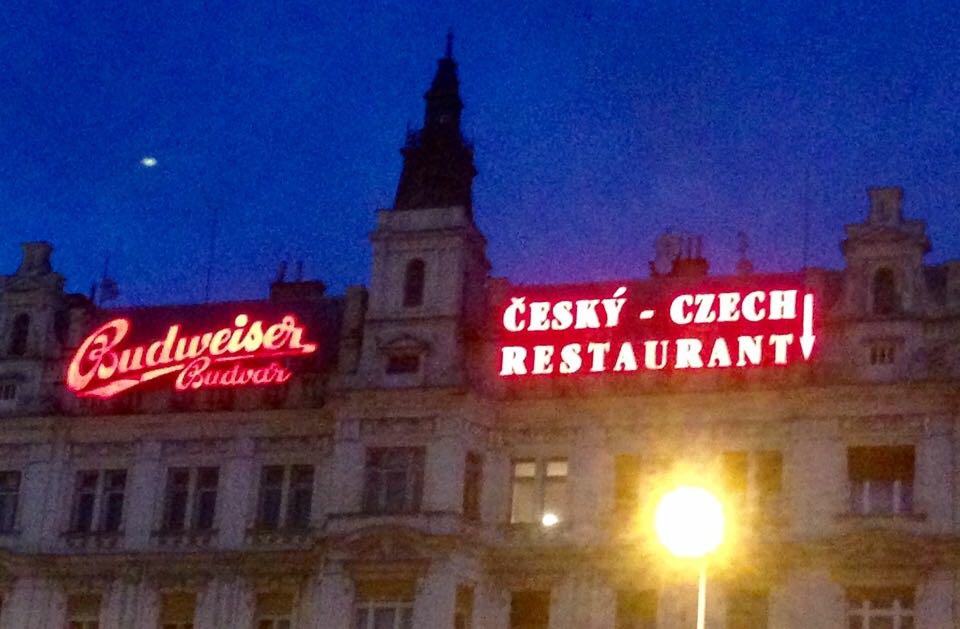 In my first trip to London I went to the Hard Rock Cafe for a real American hamburger. I know, I was supposed to be getting the English experience, but after a month of experiencing British “beef” my friends and I were delighted to sink our teeth into some prime grease. I was surprised to see Budweiser on the menu, and while I wasn’t a big Bud fan, I thought it would complete the experience. Imagine my surprise when it came to the table in a pink and yellow label, from the original Bud Weis brewery in Czechoslavakia. They’ve been brewing since the 1300s, and are still going strong, it appears.

One thought on “We have arrived in Prague”