By the Night Writer 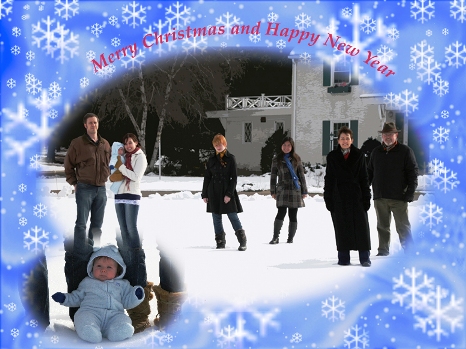 This time last year the Christmas presents represented only a portion of everything that was under wraps. We had learned a couple of weeks earlier that the Mall Diva and Son@Night, looking forward to celebrating their first Christmas together, were also going to be looking forward to their first-born child. In due season their son Benjamin, aka Baby Moose, was born and it has seemed as if the summer and fall have flown by as we’ve watched him grow prodigiously in size and charm. As he has gotten bigger, and his first Christmas has gotten nearer, I’ve tried to hold the passing days as closely as I’ve held him; he has been full of giggles, the days not so much.

This year, as we count down the days until Christmas with the usual excitement I am also counting the dwindling days of what could likely be our last Christmas together, at least as we’ve come to know it. The Diva and the Senior Moose have lived with us since they were married as Ben finished seminary and renovated our porch to hold their unexpectedly growing family. While we waited for the baby to come he finished his classes and his internship and awaited his call to ministry. Just as Christmas and babies do, this too arrived at last and they will be moving to Iowa early in the new year to begin an exciting time in the life of their new family, even if it’s in a career field where your employers somehow don’t expect you to take Christmas off.  Tomorrow we’ll wake up one more time as the Mall Diva and Tiger Lilly romp downstairs to collect the stockings and bring them into my wife’s and my bedroom for the “appetizers” before we go downstairs to rip open the rest of the presents. That has become our tradition, though with twists; this year, for example, both Ben and our new friend from China, Lynx, will join us upstairs and there might be a baby as well. As for next year…

This year’s Christmas card photo is different from ones we’ve done in the past where we’re usually bunched up. I don’t know if it was intentional (you’ll have to ask the Reverend Mother who art-directed the photo) but symbolically as I look at it you can see the young family moving away, even as my youngest daughter herself has taken steps in the past year along a path that may wind itself far away. Standing together, of course, are my wife and I on our home turf. We’re not lonely, however – at least, not yet. Let’s not overlook our “adopted daughter”, Lynx, who is working on a Master’s degree in Accounting at the University of Minnesota. Her future and career are apt to lie far away but she stands in the gap in this picture to represent the new people who will come into our lives, perhaps even from unexpected places.

Last night I sat with the men in the Bible Study at Red Wing Correctional. For each of them, as well, this a “last” Christmas, as each is scheduled to be released in 2011. A couple of them have been in prison for around twenty years, and one man told me he actually feels a certain warmth and nostalgia about this Christmas. “As terrible as it is to be here,” he said, “I know that I have friends here who know me and understand what I’ve been through in a way that no one else in my life will likely ever be able to do. I want to be out, but at the same time I appreciate what I have here in a way that I never would have expected.” He’s looking at this Christmas as his best ever, and though he’s especially looking forward to next Christmas as well, there’s some nervousness about that. It can be hard, after all, to know how to go about starting a new tradition.

Come to think of it, though, we didn’t put a lot of thought into the traditions we started. We just did what seemed natural to us as we kept our eyes on a special future and somehow it all came together. I wouldn’t change a thing, and while I may hold my breath, I look forward to what is to come, confident that our vision is intact and the future we are standing on is as bright as the snow in our Christmas photo.