One day while we were still in Madrid we decided to take a day trip to nearby city of Segovia, once the seat of the Spanish kings and the site of an ancient but still functioning Roman aqueduct. Segovia is a little more than 60 miles from Madrid and can be reached by high-speed train in about half an hour; as we got off the train I remember thinking how the trip lasted about the same amount of time it takes me to ride the Minneapolis light rail from Fort Snelling to downtown. It is a beautiful, walled city that features a beautiful gothic Cathedral in the central plaza and the incredible Alcázar, the castle that was the inspiration for Walt Disney’s trademark magic kingdom.

You can pretty much walk through the city in four or five hours, depending on how much time you take to view the cathedral and the castle. The stone buildings lining the winding city streets date back to the Middle Ages or earlier and are interesting in their own right, though most have been turned into upscale clothing stores and other shops that cater to the thousands of tourists that stream through the city every day. Despite the glitter of modern commerce you can still feel the history that seeps through the old stones. The highlight, however, has to be The Alcázar, a dominating but lovely presence that commands the promontory on which the city is built. Originally an Arab fort, most likely built on Roman foundations, the castle was repeatedly added onto by several generations of Castilian kings beginning in the 1100s. The Alcázar (I’d pronounce it Al-Kazaar, separating it between the first and second syllables, but the audioguide I rented pronounced it alCAZer) is nowhere near as large as Stirling Castle or Edinburgh Castle and the great rooms are really rather intimate; the throne room itself would just about fit inside my living room, but it is intricately decorated, including many of the ceilings that have their own distinctive motif, and the Hall of Kings that features nearly life-sized carvings of the rulers of Castile circling the upper walls of the room. Follow Tiger Lilly Jones below to view a series of photos we took of this fascinating city. 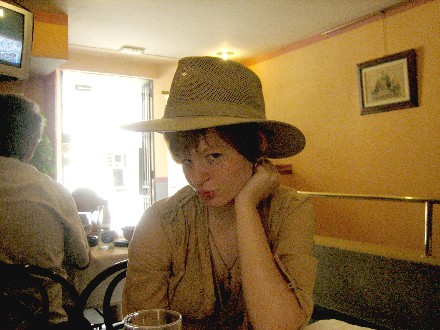 Tiger Lilly Jones is ready to lead you on a tour of Segovia. See below.

Click here to follow. (Note: select “Gallery View” in the slide show to view without music and to view slide show controls. In “Overview” mode, you can freeze an image by hovering the cursor over it.)

4 thoughts on “Segovia, the magical kingdom”