We went to the Mediterranean Sea today. The water was warm, surprisingly enough, and the waves were… happy. In fact, they inspired a poem:

Ah, the blue of the sea
I am floating in a cloud of dreams
I am one with the– WHAT THE HECK WAS THAT?!

Okay, so Dad wrote most of that one. I just paraphrased. However, I had an… interesting experience, shall we say. There were some people in the water who were waiting until a wave was curling in on itself, and then diving headfirst into the wave. This usually ended up with them being tossed about in the water and washing up a few yards (meters) away closer to shore. Not that they were very far out anyway, probably just 15 feet into the water. I was wading, picking up nice rocks, when one of these wave-divers was swept towards me and managed to stop by hitting my legs. I saw it coming, but couldn’t exactly move out of the way, considering the water that was swirling up around my shins. The man was in his late-thirties and had long-ish hair, with a bald spot. He apologized, I asked him if he was okay, yadda yadda. I probably shouldn’t have encouraged him by saying that, though. He went back to his waves. I waded in a little deeper, letting bigger waves hit me, until 15 minutes later he noticed me again, just as a large wave came up and smacked me in the face. I went back to retrieve my towel to wipe my face off, and he beckoned me farther out to sea (we were in a set swimming area, so you couldn’t go out past a half-mile). I managed to make my way past the waves that were trying desperately to push me back. Finally I got to the point where the waves were swelling, but not actually breaking. It was fun to jump just as the crest of the wave comes up to you and then slide down the other side of it. It’s kind of hard to explain, and not really relevant to the story, so I’ll just shut up about that and move on.

ANYway, as we were moving with the waves, this same guy asked me where I was from, what my name was, and where I was going. He said his name was Achmed, and he was from Pakistan. My first thought was, Achmed? As in, the terrorist? As in, the Dead Terrorist? Then he said, “You look very beautiful.” Then my thought process changed to, Okay, a little creepy, what kind of person randomly says stuff like that? Maybe this is what passes for small talk in Pakistan. But I just smiled and said thank you and that was that. I lost track of where I was floating, and when I looked back to where Mom was standing and holding my towel, I saw she was waving her arms dramatically in some ancient form of communication. I surmised that she wanted me to go back to shore, so, thinking that it was time to go, I said good-bye to Achmed. His response:

A: “Do you have a mobile phone number?”

He said something else, but I couldn’t understand what it was, so I just shrugged and went back to Mom. Mom simply said to watch where I was swimming, because the waves had carried me about 10 or 15 yards away from where I had originally started. Then she said,

RM: That guy (meaning Achmed) in the black shirt likes you.

Back in the water, he again came up to me and started up some other conversation.

A: Will you marry me?

Me: *didn’t hear him correctly* What?

A: You’re just so beautiful.

Me: Thank you. *Dad, please get the shotgun…and shark repellent.*

Then, conveeeeeeeniently, a large wave came rushing up. We both went under and were being carried around by the waves. I’m not sure if this was an accident, but I think it probably wasn’t: under the pretext of trying to get back on his feet, I felt his hands wrap around my shin and climb up. Much farther up than they should have been (Ach-med, Oct-opus, not very much of a difference. They’re both grabby). I refrained from killing him violently (I have a katana that fits in my bikini, you know), for fear that the blood in the water would attract sharks. That’s me, always thinking of other people’s safety… Thankfully, the wave settled down just as another came up and I was swept away from him and his probably lecherous grip. After a couple futile attempts to get back into the middle of the swimming area, and a few mouthfuls of sea water (it was very very salty, and I thought I was going to throw up), Mom did her waving thing again, and this time it was actually time to go. As I waved good-bye (forever, I hope), he blew a kiss. My eye twitched, and I considered doing something rude. I settled for another half-hearted wave and turned away, to see Dad standing much closer than the action than I thought he was. Dad told me that he also waved to Achmed, only his wave was much more threatening.

All through the night now, I’ve been having weird little twitches and shivers, feeling like Achmed’s hands were still there, just begging me to chop them off…

Apparently, the reason Dad wasn’t at the scene sooner was because he was taking a picture of Achmed to wire to the Department of Homeland Security. 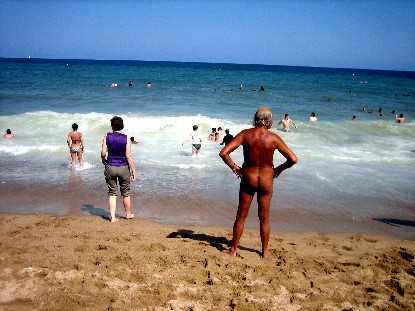 Guess which pervo is Achmed...

Okay, okay, I know you guessed wrong on that one (don’t try to lie to me, I can read minds through computers), so here is the correct answer: 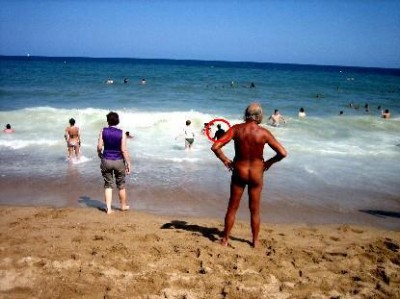 Ta daaa!!! I know, it's really detailed. Is this enough info for a tag team effort with you and Dad, Kevin?

18 thoughts on “Achmed, the Good-As-Dead Terrorist”