Minnesota may be home to the Mall of America, but Madrid at night has to be the Mall of the World, especially on the weekends. Dinner is served very late here by American standards, often not until 9 p.m. (and may go on for a couple of hours) and when dinner is over the party is only beginning. Many of the streets of this old and historic city are narrow and fill with people once the sun goes down as everyone hits the cobblestones to move between the pubs and clubs in the quest for tapas, canas and a good time. Meanwhile, the music pumps from each establishment and the still warm night air is frequently punctuated with shouts and singing. The number of people moving in both directions of streets lined with open establishments is just like at a mall and the enthusiasm is catching. 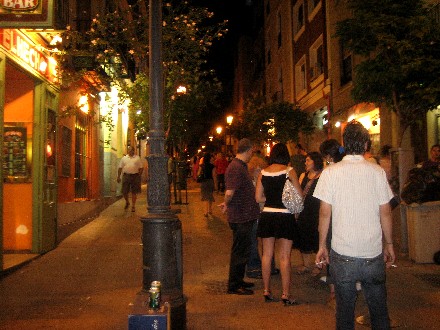 This photo was taken at about 1 a.m. Sunday morning, just as things are really getting going. This street runs past the apartment building where we are staying and there are several bars and restaurants along this way and in the surrounding blocks.

Even in the heat of the day there is hustle and bustle in this very cosmopolitan city, though the pace would drive a New Yorker crazy as nobody seems to be in too great a hurry. 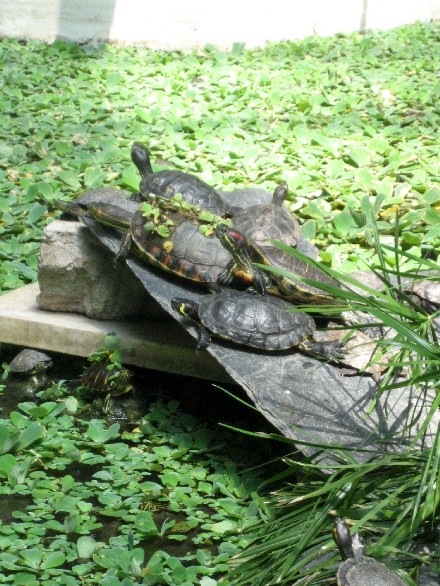 These turtles are denizens of Madrid and perhaps represent what it can be like to move along a sidewalk here at times. These turtles, however, live in a lush pond inside of Atocha Station, one of the hubs of the city.

The heat probably contributes to that, but while the temperatures have been well into the 90s in both Madrid and Cazorla while we’ve been here, the humidity is pretty low. If you are in the shade it is really quite bearable, so strategic positioning is a must as you move from place to place. 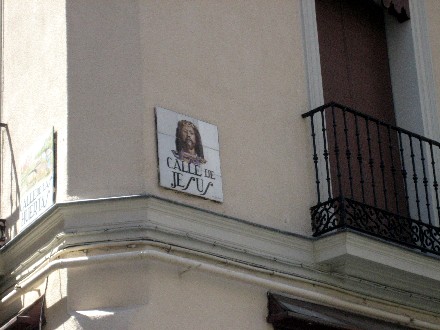 Come ye who are hot and heavy-laden and I will give thee shade -- Ok, that's not a direct translation, but in this photo the Son of Man beckons one to the shady and pleasant side of the street. 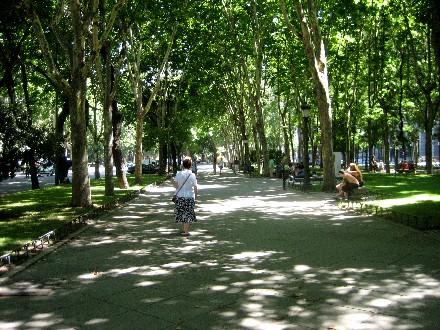 This tree-lined apart immediately in front of the Prado is an attactive and comfortable place to stroll. 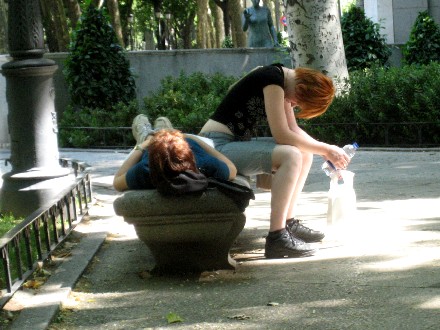 The affects of the sangria from the Menu del Dias are evident, and the shady park in the boulevard that runs in front of the Prado is a good place for a crash siesta.

4 thoughts on “Madrid is the Mall of the World”