I’ve learned from previous overseas trips that you really don’t need as many clothes as you might think you do. When weight and space are prime concerns then two or three pairs of pants and 4-6 shirts (depending on how much you think you’ll sweat) can last you more than a week (and sometimes two) between launderings. If you have regular access to a washing machine you could get by with less. Since I was limiting myself as I packed for this trip, I naturally chose only my most favorite shirts based on color and comfort. (I was also limited by having to pack 8 pairs of Tiger Lilly’s shoes and boots into my bag, but she is staying a lot longer than I will be.)

The problem with this strategy is that since my most favorite shirts are the ones most likely to be worn, they are also the most likely to be worn out. For some reason, I don’t notice a frayed collar or sleeve when I’m at home – and neither does my wife. When we’re sitting in an airport, or on a train, however (and not in the vicinity of a George Clooney billboard), I am somehow more likely to become the object of her attention. First I may hear a little gasp, followed by a tactful pause. Then, “Dear – maybe you shouldn’t wear that shirt out in public.”

The upshot of which is that I’m over here in Europe with few presentable garments for my upper body – and no gypsy tent-makers in sight. This might explain why my wife is so content to leave me in my tower rather than have me mingle with the public. The thing is, as I get more accustomed to the stairs, I really like getting out on the streets of Prague – especially if I’ve been cooped up in the apartment for a couple of days. Last night when we hit the streets (under cover of  darkness) I felt like a puppy turned loose in the yard, eager to sniff everything. While we were out we noticed a clothing store near the apartment, and a visit there made a good excuse for getting out at lunchtime today to see what they might have in my size. I scored two nice-looking cotton shirts for 200 krona (about $8) each, and my wife picked up some sweaters at a similar price.

That mission accomplished we went to lunch at a place called Polévky, which means “Soups”. (I wonder if they’ve trademarked that)? The Reverend Mother and Tiger Lilly discovered this place the first week we were here, and they make a great chicken and tarragon soup in a tomato base. I got mine with a big wedge of bread, about the size of a large pizza slice, filled with cheese. 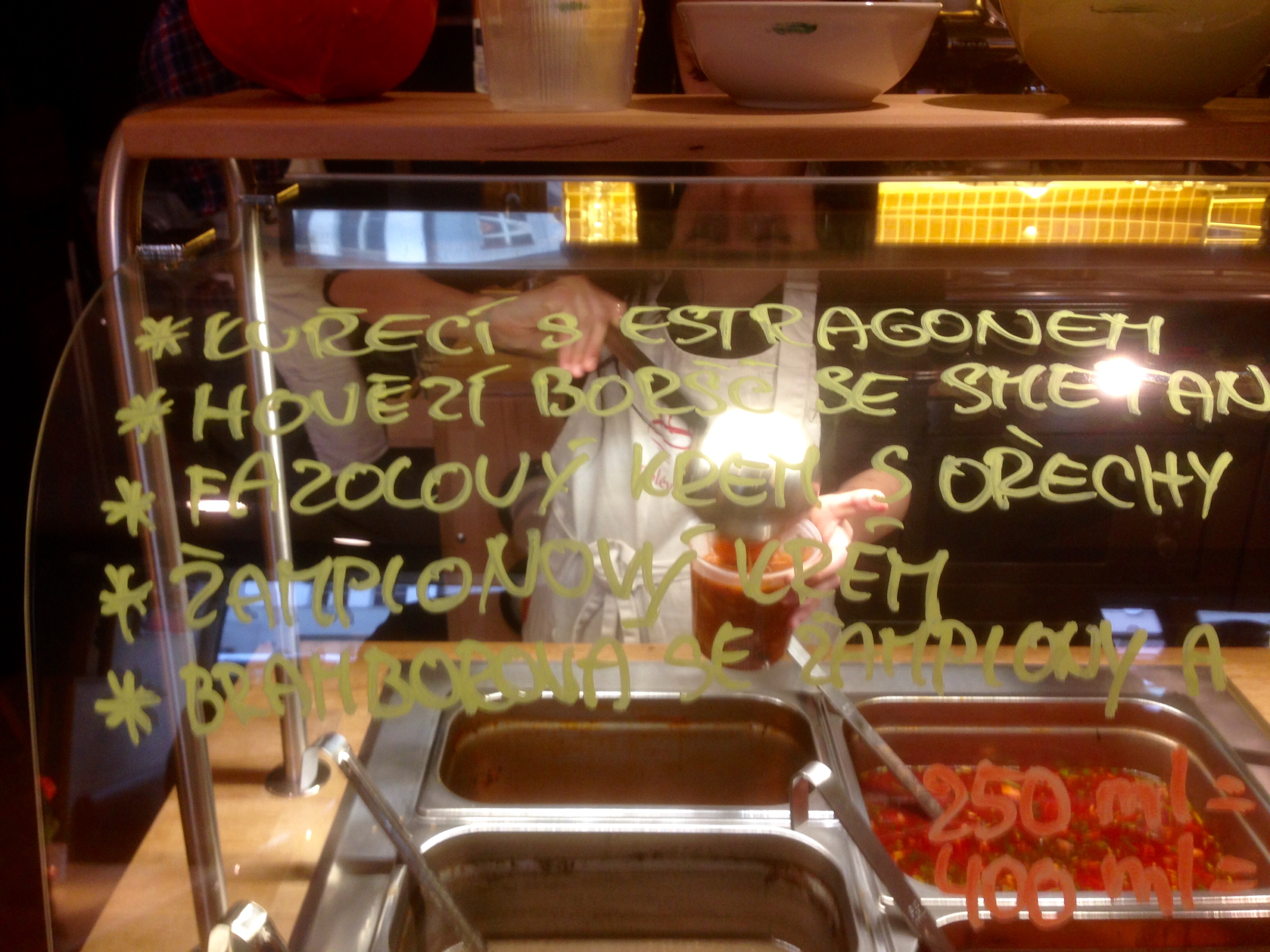 The first soup is the chicken and tarragon; very savory! The other soups are, roughly translated, “beef in cream”, “bean and nuts in cream”, “cream of mushroom” and “potatoes and mushrooms”.

There is another cafe close by as well, “The Beach Cafe” that I’m going to try. The lettering on the window invites you to “sit in their pleasant surroundings” and they offer “daily breads”, stuffed baguettes, cutlets and…oh, ick…fried cauliflower. Sometimes you’ve got to live dangerously when you’re on the streets. 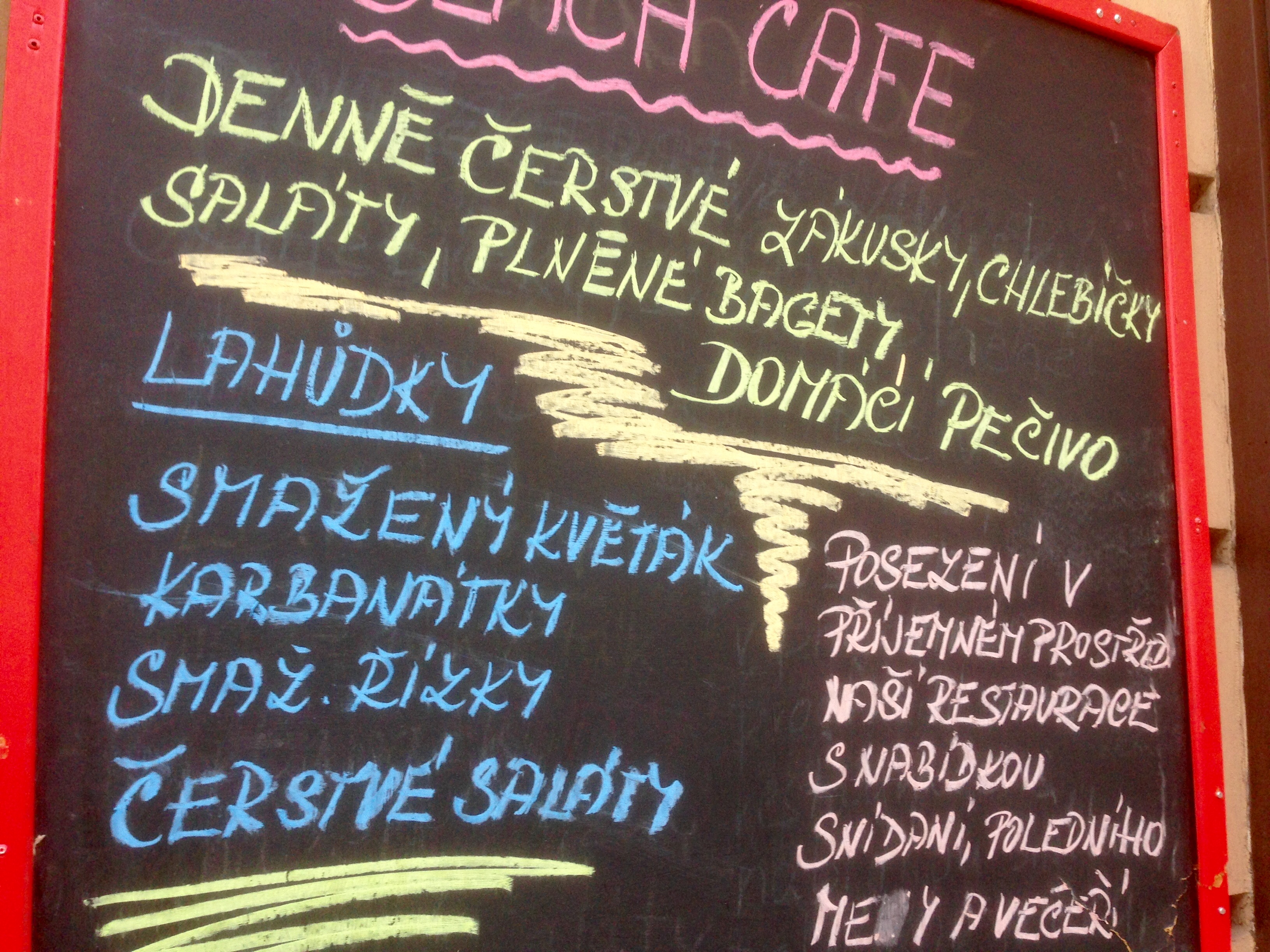 Here are my new shirts – cheap, but the collars and cuffs are pristine. (Diet tip: try converting your sizes to centimeters, big boy.) 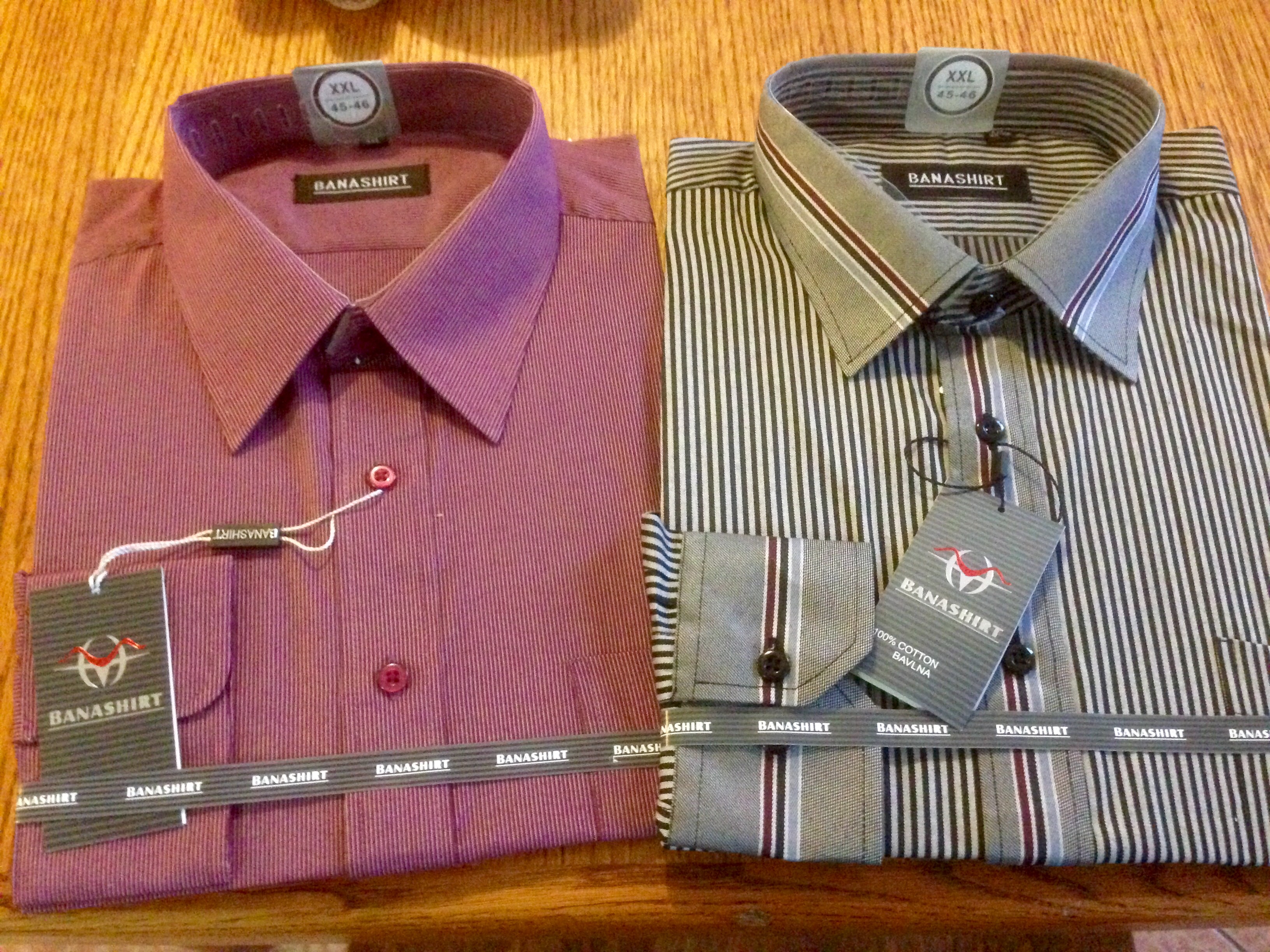 One thought on “A man’s gotta eat – and shop”