The inane political bickering over spending cuts that do about as much good as an ice-scraper on the side of the iceberg that hit the Titanic, a debt-to-GDP-ratios of around 140% and yesterday’s S&P downgrade of the country’s bond rating made me think of an analogy that I shared on Mr. D’s blog the other day:

A car is barreling down the highway as the driver fiddles with the seat heater while balancing a Big Mac, fries and large Coke in his lap and staring at the GPS screen instead of at the road ahead. Meanwhile everyone else in the car is arguing loudly over what music to play through the high-tech, 12-speaker sound system and whether it’s too hot or too cold in the compartment, and who gets to drive next.

Suddenly they realize there’s a brick wall ahead. What to do? Hitting the brakes hard will toss people about, make them spill their drinks, bump their heads and hurt their feelings. Or you can just hit the wall. Either way, the car is going to come to a stop.

One option gives you chance to perhaps survive and eventually drive around the obstruction. The other results in a litte white marker beside the road, commemorating what once had been.

The choice is between the unacceptable and the unthinkable. And some just say, “Go faster.”

Don’t put all the blame on the current driver, though. The car turned down this road a long, long time ago and no one paid attention to the Dead End sign. There have been several drivers since then, and some have had more of a lead foot than others but no one’s ever seriously tried to change direction, though we have veered from the ditch occasionally.

It really is an old story, so old that few alive today can even remember it being any other way. How old? Check out the cartoon below I just saw today and that comes from a 1934 issue of the Chicago Tribune and it’s depiction of “young pinkos from Columbia and Harvard”, what looks like two versions of Stalin (the Road to Serfdom was thought to lead to Communism, not Socialism then) and the “Plan of Action for the U.S.: Spend! Spend! Spend under the guise of recovery – bust the government – blame the capitalists for the failure – junk the Constitution and declare a dictatorship.” 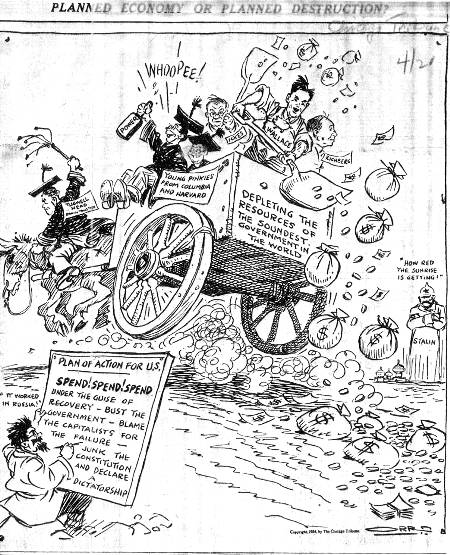