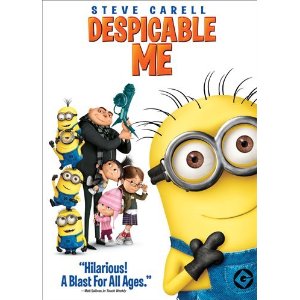 Behind every super-villain is a lousy parent. At least that’s the message I picked up on when the family sat down the other night to watch the DVD of Despicable Me, the animated movie featuring the voices of Steve Carell, Jason Segal and Julie Andrews. Whether it’s the main character Gru’s self-centered and impossible to impress mother or the demanding and bullying father of Gru’s also-evil nemesis, Vector, the path to megalomania appears to start in the nursery.

These two parents are only minor elements of the story, however, as the central dramatic tension and humor comes from the diabolically dysfunctional Gru’s attempts at parenting three orphan girls he adopts as cover for one of his fiendish plots. In fact, as I think of it, the only “normal” kids in the movie are the orphans who don’t have any parents, though they do suffer a bit at the hands of Miss Hattie, the director of the orphanage who is an “iron fist in a velvet glove while wearing a pair of brass knuckles type”. The plucky heroines are unfazed by either Miss Hattie or the woefully ill-equipped Gru’s attempts at authority.

Granted, I’m not going to get too serious about the “reality” or message of a movie that also posits that the moon, having been shrunk and stolen, will snap back into its normal orbit again when it re-enlarges, but still.

If a key part of humor is doing the unexpected then a movie where the adults are smarter than the children would surely be the smash comedy hit of the year.

One thought on “Despicable Parenting”