On Friday night, two weeks past his due date and as his mother was enjoying a kitchen-sink burger at the Groveland Tap, my grandson started to indicate that he was finally serious about moving out. As the pre-labor contractions firmed up we all headed for home to wait. According to Tom Petty, the waiting is the hardest part, but then he never gave birth. Make no mistake, the waiting is pretty hard but while one’s butt might get tired and sore from sitting around, it doesn’t compare to one’s body preparing itself to expel another living human.

We went to bed Friday night with some restless anticipation, but nothing significant transpired. Saturday morning Faith (aka, “Mall Diva” and “Mom”) had an appointment with Dr. Sharon, who the Reverend Mother dubbed “the Spin Doctor”. She’s a chiropractor with a specialty in “spinning” babies into position. I went with Faith and Ben to the appointment as Faith had “silent” contractions. That is, she’d stop talking in mid-sentence and close her eyes as the wave passed. Dr. Sharon did her thing and put Faith on a special table for about an hour and a half where she was able to really relax; it was an important break because Faith hadn’t slept much Friday night and it was going to be awhile before she could again. By Saturday afternoon the contractions were “louder” in that Faith managed the pain by using lower-pitched groans. It was upsetting for me at first because it triggered the “Dad the Defender” synapses but once I realized it was a useful technique I settled down. A little. Faith’s voice and breath training as a singer paid off; she stayed in key and projected, though her normal contralto was now more alto. The mid-wives, Maureen and Allie, arrived about 10:30 Saturday night to take over. Great – let’s have a baby, right? Not so fast (believe me, not so fast).

Anyway, things went along pretty much according to nature and God’s timing, and it appeared (to me, anyway) that we were on-track for a delivery sometime after daybreak on Sunday. I mostly kept myself out of the way but would come upstairs every couple of hours Saturday night/Sunday morning to check on the situation. The Reverend Mother, Tiger Lilly and another friend, Anna, took turns laying next to Faith and rubbing her back while Papa Ben stayed face-to-Faith. I’d pop my head in and say things like, “I love you” and “You’re doing great!” or “What’s taking so long?” (Everybody’s got to have a job, after all). About 6:30 in the morning I went out to get doughnuts for the team, thinking we’d be ready for a celebration or otherwise need a sugar-rush to power through at the end. This ever-so-reluctant-baby, though, was still not finding things to his liking. Allie called Dr. Sharon and asked if she could make a house-call, which she was happy to do. Turns out that the mother’s pelvis was not at the right angle and it was keeping the baby’s head from dropping down into the delivery channel. With a little show and tell, Dr. Sharon fixed the situation and — Voila — the baby was ready to hit the beach. Well, again, not quite. It was late morning by now and Faith was exhausted. Her and the baby’s vital signs were all good (except for the brief moment when the baby’s heart-rate plunged while everyone else’s tripled but all went back to normal after a shift in position) but Maureen said that Faith needed a couple of hours of rest, now that the baby was in position, so she could have the strength for the delivery itself. (We’re pretty certain, btw, that if Faith had been in a hospital and the baby wasn’t getting into position that the doctor would have been calling for a C-section). We discussed the situation and contingency plans with Maureen for “if-then” scenarios. Since mother and baby weren’t in any distress, however, and Faith was adamant about having the baby at home, Faith would take some Benadryl and rest for a couple of hours. After that, the hospital was a distinct option, but only if there was a problem.

After the nap it was back into production mode. It wasn’t entirely smooth but Faith was so courageous and composed throughout. She never got angry or said anything nasty and even when she was totally exhausted she had the inner resources and determination to push through, with her mother and sister close at hand. Finally, at 5:58 my youngest daughter, Tiger Lilly, hollered downstairs, “Daddy, come see your new grandson!” As I thundered up the stairs I heard a brand new voice — crying at the top of his new but strong lungs — and that’s when my head nearly spun off of my body at the enormity of what had actually happened, right here in my own home, to my own daughter. Just moments ago the only thing we could hear of him was the heatbeat on the monitor, and now — a voice! I’d already well-imagined a face, hair, little fists and feet — but never thought about hearing him for the first time! The stairway seemed to contract on me for a moment as if I were making my own way out into a new world and then I joined the crowd in the bedroom, shouldering my place into line to wait, with arms wide-open, for my turn to hold him. 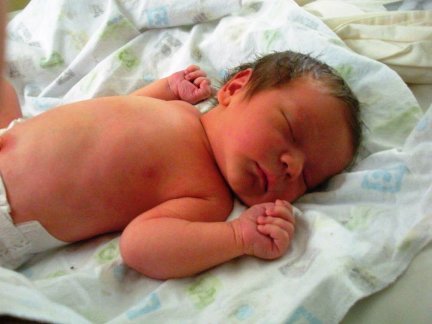 For Faith and Ben:

14 thoughts on “With arms wide open”