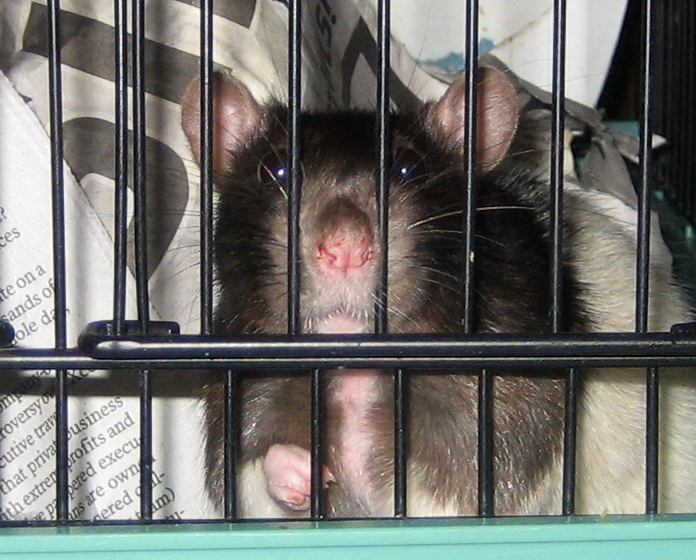 Listen up, you humans. I don’t have much time because when they find me up here they’re gonna put me back in that cage. I doooooooooon’t wanna go!  Yeah, that’s right, it’s Sly. Yes, rats know how to type and use the intertube, but most of us can’t get access. Anyway, the deal is I’m gonna tell you what’s really goes on around here. I admit this is a pretty good gig but they could feed me more. What do they think? Like I can’t smell all those things they’re eating when my cage is right inside the door from the kitchen. Why don’t they just hand some over who cares how much the rat weighs! Come on I’m a rat!  What else do I have to live for. I happen to know that aren’t any boys around because when I manage to get out I run all over looking for some and I’ve never found one no not one. It’s probably for the best because there’s barely enough food for me.

So here’s the deal. There’s a bunch of people living here and most of em are OK. There are two ugly birds also in a cage, on the other side of the room, and when they manage to get out all heck breaks loose. They go everywhere and by go you know what I mean. Anyway most of the human are like I said, OK. There’s a new guy who used to only be here once in a while and now they can’t seem to get rid of him. I don’t like him he swats at me and doesn’t give me any treats. I chew his clothes when I manage to get time on the outside. There’s lots of girl humans and they like me. Human girl 1 gives me warm oatmeal almost every morning but not enough and then most days she leaves the house. Human girl 2 who looks almost like girl 1 go figure, she likes me a lot and takes me out ocassionally and compliments me but she could give me more treats. Human girl 3 has the weirdest hair and acts really funny and pretends to be a ninja at least I think she’s pretending, but I like her because she gives me food and takes me out and lets me chew run around on the couch. Then there’s this really big human who’s not here much which is too bad because even though he’s really scary he gives me food. So like I said it’s a pretty good gig at least when I’m not fasting but I overhear some crazy stuff sometimes and noooooooooo, I’m not finished  ..    .    .    .  …   .   .

3 thoughts on “Many are Called, Few are Chosen”