There was a remarkable incident in the Boston subway Friday night when two alert MBTA (formerly the MTA) employees — one on the platform and the other driving — brought a subway car to a screeching halt inches from a woman who had fallen onto the tracks. 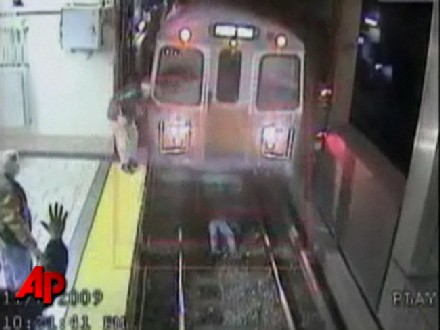 In this image made from a Friday, Nov. 6, 2009 surveillance video provided by the Massachusetts Bay Transportation Authority, a subway train comes to a stop just before running over an unidentified woman who fell on the tracks at Boston's North Station. The woman suffered some scrapes and was taken to a hospital for evaluation. She told authorities she had been drinking. (AP Photo/Massachusetts Bay Transportation Authority via AP Television Network)

Unlike the classic Kingston Trio song about the man who never returned (follow the link and click the iLike.com mp3 at the top of the page) this one has a happy ending. Well done, MBTA!

One thought on “Lady on the MTA (did she ever return?)”