I wanted to take a minute to tell you about a great mystery series our whole family has been enjoying: Foyle’s War. 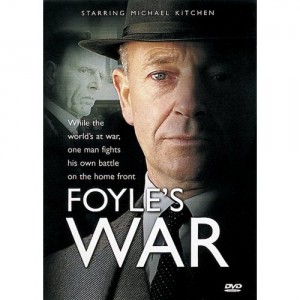 It’s a British series set in the southeast of England beginning in the early days of World War II. Michael Kitchen stars as Detective Chief Superintendent Christopher Foyle who would much rather be doing something to aid the war effort but is pretty much stuck in Hastings.  For a quiet area (except for the occasional air raid), Foyle finds himself investigating quite a few murders. A quiet, resolute man he methodically rolls up clues and killers against the backdrop of war-time intrigue and paranoia. Similarly the series quietly grows on you as the main characters subtly reveal, bit by bit, a little more of their own histories and motivations.

Kitchen is absolutely fantastic in understated performances that demonstrate he probably has the most expressive wrinkles and folds in his face of any actor I’ve seen — though you get a hint that there’s great passion being kept under tight control. Complementary players include the awesomely named Honeysuckle Weeks as Foyle’s preternaturally perky driver, Samantha (Sam) Stewart and his wounded investigator, Sgt. Paul Milner (Anthony Howell), plus first class performances by a host of single-episode (so far) actors.

While the mysteries and performances are engrossing, the thing that really sets this show apart is the painstaking attention to detail in dress, settings and the human undercurrents of xenophobic patriots, Nazi sympathizers and government officials with their own agendas and an ever-shifting series of moral and dramatic issues. Each episode is about an hour and a half and there were only four episodes in each of the five years of the show. We ‘re halfway through the second year right now and can hardly wait to get each new disc from Netflix.

Check this out if you like superbly crafted dramas with unforgettable characters.

One thought on “Don’t miss this war”